Hailing from the tropics of Jamaica, Lawrence Palmer brings a unique boot camp workout program to Old Fourth Ward. Gauge Fitness was born out of Palmer’s belief in the life-changing power of fusing physical fitness with a sense of community. The group setting allows clients to build friendships while simultaneously cultivating a sense of accountability, commitment and competition. 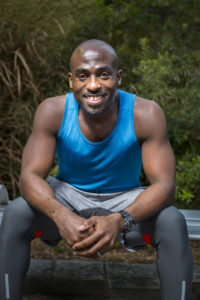 Despite an impressive resume as a boot camp instructor, former CrossFit trainer and gym owner, Palmer didn’t always make physical fitness an integral part of his lifestyle. “After years of neglect, my body and self-esteem became unrecognizable to me,” he says. “I hired a trainer, enrolled in boot camp and lost 60 pounds in a span of six months. From there I transitioned into CrossFit to get toned and recreated an active lifestyle.”

Palmer says his mother’s thirst for knowledge and improvement fueled his own motivation for change. “She currently has her master’s and is now WELLNESS Living pursuing her doctorate. She’s constantly killing it,” Palmer says. However, it wasn’t until many years after his active lifestyle transformation that he was able to channel his passion for health and physical fitness into a successful plan to help others.

Initially, Palmer attempted gym ownership and CrossFit training as a means to integrate his passion for fitness into a profession, deciding later to reject the strict rigidity both careers require. These early failures allowed Palmer to focus on a workout method that proved successful in his personal life: bootcamp. The program flexibility, heavy emphasis on socialization and adaptability to outdoor settings were all important components for Palmer’s own success and what he believes to be the success of many others. Although, working full-time as a data analyst while simultaneously building a boot camp business from the ground up proved a lengthier and more difficult task than Palmer imagined. “The more of a following it gains, the harder it has become to grow it by myself. Trying to juggle so many things at once,I can sometimes feel where my exhaustion is slipping into to my daily work,” Palmer admits.

Since its beginnings in 2015, Gauge Fitness has taken on two additional trainers as the demand for classes and class size has rapidly expanded. Kari Smith and Natalie Clark both started as dedicated clients who caught Palmer’s eye through their unwavering commitment. “Kari has never missed a session and really has a passion for working out. Natalie truly enjoys teaching and seeing the progress of her clients,” Palmer says of his now employees. No plans are currently in the works for an inside facility; Palmer instead plans to focus on getting his clients outside and interacting with the surrounding community.

When this Druid Hills resident is not working full-time as a data analyst or instructing boot camp, he volunteers with kids all over metro Atlanta. On the rare occasion he’s not at Old Fourth Ward park training clients, catch Palmer playing games at Twain’s Brewpub and Billiards in Decatur or snacking on wings at Old Fourth Ward’s Bantam Pub.

Gauge Fitness offers first-time clients discounted deals on Groupon as a way to make a transitional lifestyle change, both socially and physically. gaugefitness.com