3 mouthwatering breakfasts from around the world

There’s no doubt that American breakfast fare is delicious, but sometimes you want something other than the usual bacon and eggs to start the day. To excite your taste buds, think globally. Atlanta is home to a bevy of cultures that bring their tasty offerings to the table. From the Chinese pastries at Sweet Hut Bakery & Cafe in Midtown to the North African shakshuka poachedegg dish at Mediterranea in Grant Park, there’s an international treat for every early riser. Here are three places to get your fix.

We tend to think of French cuisine as heavy on the sauces, but breakfast in France is a lighter, simpler affair—although there’s still plenty of butter. Proof Bakeshop in Inman Park is known for its delectable delights, from cakes and bread to savory scones. Among its stars, though, is the almond croissant—rich, flaky, stuffed with a creamy almond paste and about the size of your face. It’s a morning treat that’ll make you say “Oui, oui.” Get there early, as they sell out fast.

In the U.S., our pancakes are thick, fluffy and smothered in syrup, whereas in Hungary, their pancakes, known as palacsintas, are thin and served rolled up with sweet and savory fillings such as Nutella, jam, meats and cheeses. Julianna’s in Inman Park has been whipping up the crepe-like palacsintas since 2013, and the setting couldn’t be more adorable; it’s reminiscent of a cozy European cafe and momentarily transports you out of the hustle and bustle of Atlanta. 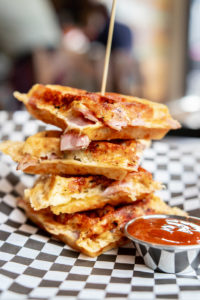 Buteco, a swanky spot in Grant Park’s Beacon development specializing in Brazilian coffee and cuisine, opened its doors last year. The offerings aren’t purely authentic, but they are more than satisfying. The pão de queijo waffles are a take on the traditional cheesy Brazilian bread. Instead of the puffed-up rolls you’ll find incountry, Buteco’s version features waffles infused with Parmesan cheese. Eat them plain or order a variety of toppings such as guava jelly and ham and cheese.

CREAM OF THE CROP