See how one couple turned their traditional, Morningside Tudor into a family-friendly haven 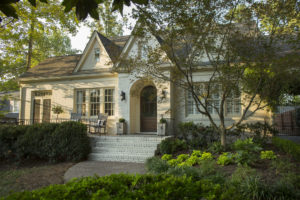 The front exterior belies how much space the house actually contains.

In 2010, when pediatric orthopedic surgeon Nick Fletcher told his wife, Jena, they would be moving from Dallas, Texas, to Atlanta so he could take a new job, she wasn’t exactly thrilled. “Atlanta was not on my short—or long—list [of choices]. I’d driven through Atlanta several times. I thought, ‘I’ll never live there. That’s crazy town,’” Jena says, referring to the city’s size and notorious traffic.

But when the couple toured Morningside with one of Nick’s Atlanta colleagues, Jena changed her opinion. “We really liked it,” she says. “It has a neighborhood feel, which is what we wanted. We could walk the kids to school. You don’t get that much anymore.” 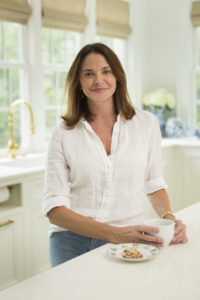 Jena loves spending time with her family in the kitchen.

Initially, Nick and Jena, who is a stay-at-home mom, rented a house in the neighborhood. In 2011, the couple decided to buy and soon found what they wanted down the street from their rental. Set back from a busy street, the property includes an English Tudor-style home with a detached garage and small guesthouse in the backyard.

“We bought it for the yard, the deck and the back porch,” Jena says. “We love our backyard. There’s no slope, no hill. It’s not common to have a guesthouse and a two-car garage with a bonus room close to everything downtown.”

On the surface, the 3,800-squarefoot home offered plenty of space for the couple and their two children— Ella, 10, and Henry, 9—and their two dogs, Winnie and Rausch. But the existing floor plan didn’t work for their family lifestyle. In the end, the Fletchers essentially gutted the first floor and redesigned it.

One big room that was left of the front entry has been divided to create a formal living and dining room. To the right, a sitting room was converted into a guest bedroom. 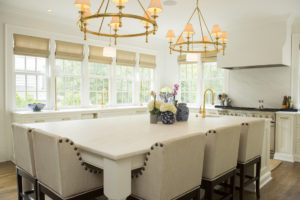 Jena designed an overly large kitchen where the family could gather and cook together.

The couple put in a small, arched hallway to connect the dining room to the family room and kitchen. Also, in reworking the walls for the guest bedroom, they created a small foyer, something Jena wanted. The back of the house initially contained a dining room, half bathroom, two bedrooms and a full bathroom. That space now comprises the family room and open kitchen, which features a massive island and lots of large windows.

“I love this [family] room and being in my kitchen,” Jena says. “I love that we’re all just in this room. We both cook, the kids cook in here, we all take part in it. The kids do homework in here. And I wanted to look at my backyard, at green space.”  Off to the side in what was previously a galley kitchen is a bar and home office area. Behind that is a laundry and mudroom.

The couple started planning the project in 2015 with Dove Studio in Roswell, with construction starting in April 2016. During the renovation, the family lived in the room above the garage and used the kitchen in the guesthouse. They moved back into the main house in November of last year. 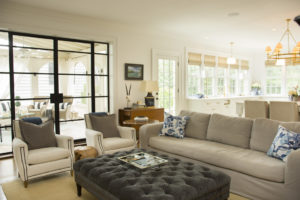 The family room easily accommodates both the family and their dogs.

When it came to furnishing the house, Jena chose pieces that are both stylish and comfortable, not to mention kid- and dog-friendly. The family room features a couch covered in a washable fabric from Pottery Barn. “I can vacuum it, wash it and hose it down,” Jena says. It is well loved by both family members and the dogs; in fact, Rausch is well known for taking over the couch, minus the back cushions. He doesn’t like them at all and wastes no time pushing them off into the floor.

Jena purchased the blue living room sofas and the gray ottoman in the family room at Domestic Comfort near Ansley Mall, and she selected the dining table and chairs from Restoration Hardware. Most of the light fixtures were purchased at Circa Lighting in Buckhead. For the foyer, the couple bought a 19-foot runner at Scott Antique Markets, which Jena then cut into shorter pieces, placing the longest part in the foyer and a second portion by the back door in the family room.

Jena incorporated lots of large windows in the master bedroom so she could enjoy views of the backyard.

The furnishings also include some family heirlooms blended in with the new pieces. Nesting tables from Nick’s grandmother are tucked in next to one of the living room couches, while her round table sits by the couch in the family room. Also in the family room, the side table by the wall came from Jena’s parents.

Throughout the house, Jena used a color palette comprised of whites, grays and blues, although she admits she doesn’t exactly know why. “I like white a lot,” she says, adding that it gives a clean backdrop for pops of color such as pillows that can be easily swapped out when the mood strikes. She also incorporated color using artwork. A majority of her collection is credited to her father, Florida artist John R. Briggs. One of her favorite pieces is hanging over the living room couch: It is a side-by-side portrait of one of Nick’s patients, a young boy before and after Nick operated on his spine to correct his scoliosis.

Other pieces by Jena’s father include a Parisian scene in the family room, lithographs at the base of the staircase and in the guest bedroom, and a pastel in the mudroom. The complementing paintings in the foyer are by a neighborhood friend. And, not surprisingly, framed photographs of the couple’s children are scattered throughout the house. 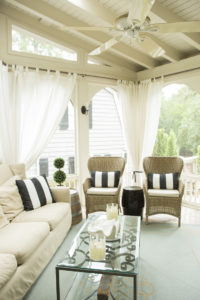 Because the family spends a lot of time outside, the back porch was a major factor in buying the house.

With the project complete, the Fletchers couldn’t be happier with their home. “We have a great property,” Jena says. “Three separate buildings on one lot in town is unique.”