WonderRoot is poised to expand as a premier artistic haven for budding creative types.

As far back as when he was a youngster attending private schools in north Atlanta and DeKalb County through earning his degree at Georgia State, Chris Appleton knew he wanted a future tied to arts and culture. But it also needed to have a key element: a link to community engagement.

“Even at 20 years old, when I got serious about it, I had no concept of what that would look like,” admits the now 34-year-old. “But I believed I had the opportunity and what I believed to be a mandate that my own privilege offered me to do something in the arts and culture world that would also be transformative. There had to be a way I could increase engagement by also increasing access to that arts and culture.” 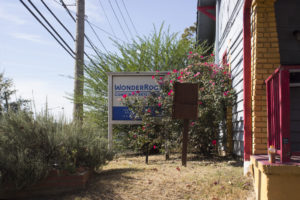 In 2004, Appleton’s idea took the form of WonderRoot, a Reynoldstown nonprofit that offers fledgling artists access to creative spaces. Its heart is a 4,000-square-foot bungalow on Memorial Drive that doubles as a community arts center with a recording studio, darkroom, pottery studio, digital media lab, gallery, music venue and a small library. It’s often crowded with artists working on projects or adults and kids packing in for arts classes.

“We want to provide artists the opportunity to have careers in Atlanta, and we offer space and tools to do that, then connect them with audiences,” Appleton says. But he’s not just committed to inspiring and supporting artists: he’s also passionate about connecting those artists with opportunities to share their work in public spaces across Atlanta, where everyone can share in the benefits art brings.

“We take artists out of the galleries and museums and into spaces where people are; we take art to the streets,” says Appleton. “And we partner with civic and community organizations to develop arts events around social issues in Atlanta.”

For instance, WonderRoot artists have paired with MARTA to produce public art that enhances train and bus stations. Last June, a group created work was installed at the King Memorial station. In November, a series of murals depicting families from the neighborhood was erected at the Oakland City stop near West End. Other projects have been part of the BeltLine. In addition, WonderRoot takes teaching artists into schools and supports an alternative sentencing program through the Atlanta municipal court system.

“Instead of facing jail time, people can participate in an arts and leadership development program we run that’s been around about a year and a half,” says Appleton. “We’ve had 35 people participate so far to learn arts related, marketable skills like photography, graphic arts, audio engineering and other technical skills that increase their employment opportunities.

After six months, if they complete the program, the charges are removed from record. And they have to come back and mentor the next cohort.” After years of calling that rehabbed bungalow home, WonderRoot is gearing up to grow again. The organization is refurbishing a former school building across the street into a new, 54,000-square-foot center to accommodate more aspiring artists.

“Often in the early stages of a career, an artist may not have the means to afford a studio or equipment,” Appleton says. “For $60 a year, we can give them unlimited access to what they need. It’s another way to lower the economic barriers that keep people from building a career in the arts.”

Appleton measures the nonprofit’s success not just by the ability to buy a bigger building. “We really evaluate that based on how the artists who come through our programs grow and thrive in Atlanta,” he says. “For years, we saw artists leave for L.A. or New York. But Atlanta is no longer an area artists are fleeing; it’s where they’re moving to and staying to build sustainable careers. The theory of change says that if art and culture are important to advancing social change, then there must be a thriving cultural community. That’s what we’re establishing here.”