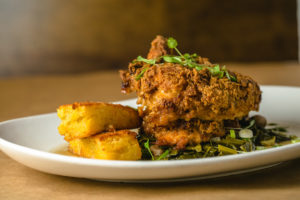 In my husband’s memory, Wisteria Restaurant stands out as the place where he first ate skate wing. And his mouth still waters at the memory of its buttery flakiness.

I later learned at least part of the reason why skate wing isn’t common to Atlanta menus. “It’s hard to clean and deal with, so you don’t see it a lot,” says Wisteria’s chef/owner Jason Hill. The prep takes time, but the entrée remains popular, so it stays on the menu.

At a recent dinner, my husband planned to order it again, but after perusing the menu, he opted instead for the Low-Country Seafood Stew. One bite was all it took to banish any doubt about the last-minute substitution. He gobbled up the eye-popping bowlful of clams, mussels, crawfish, calamari, salmon, andouille sausage, corn on the cob, potatoes and peas, then sopped up every last drop of the savory broth with the accompanying cornbread. I felt transported to the coast with each spoonful I snuck from his dish. 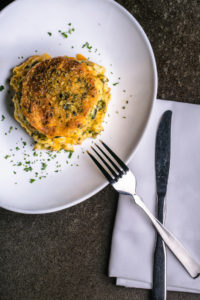 The addition of broccoli rabe in the mac and cheese will make you wonder why you haven’t always been eating it that way.

That’s not the only low country classic on the menu, which is no surprise given that Hill graduated from Johnson & Wales University in Charleston. Shrimp and grits is among the options, and Hill’s rendition tops Adluh Stone- Ground Grits with sautéed peppers and onions, plentiful succulent shrimp and a moderately spicy shrimp broth. Each bite is a satisfying blend of comfort and complexity.

For a meal that sticks with the coastal theme, start with the Charleston-style jumbo lump crab cake appetizer. The patty is dense with sweet meat and served atop a scrumptious roasted corn and pepper succotash alongside a crisp basil chip. The app is large enough to divvy up if you’re satisfied with a few bites, but if after one taste you decide it’s too good to share, no one will judge as long as you quickly order another for your dining companion.

On a subsequent visit, my husband and I started with classic oysters Rockefeller. He enjoys oysters in all forms, but I prefer Wisteria’s preparation: smothered in cream, leeks, bacon and Parmesan, then baked on the half shell.

Add a cocktail, and I enjoy oysters even more. The drinks at Wisteria are consistently delicious, whether you order a classic cocktail or a seasonal creation. The Plum Cooler impressed my palate enough to order another, but the bartender free-poured ingredients rather than measured, so the second one wasn’t as balanced as the first. Perhaps it’s best to try a different drink instead of the same one back to back. You can’t go wrong with the Whiskey Rebellion, a sip-worthy blend of Redemption Rye whiskey, Pimm’s No. 1, fresh lemon and sugar. 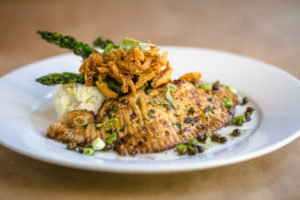 If you think you don’t like skate wing, Wisteria’s version will make you think again.

Since opening in 2001, Wisteria has worked with local and regional farmers to source its ingredients, and salads such as the seasonal butternut squash and Lacinato kale (a variety popular in Tuscany) really show off fresh produce. When I ordered my salad with a side of mac and cheese, the waiter exclaimed, “I like where this is going.” Hill tosses broccoli rabe into his baked version, which adds a bitter note that cuts through the creamy cheese. It’s a yummy twist that makes you wonder why everyone else isn’t doing the same thing. 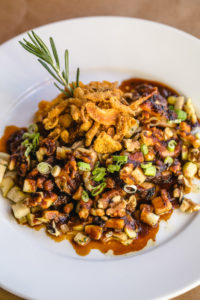 The grilled pork tenderloin, thoughtfully brined for 24 hours, is one of Wisteria’s top sellers.

The grilled pork tenderloin and Iron Skillet Fried Half Chicken are the restaurant’s two most popular entrées. “They’ve been our top sellers forever,” says Hill. When he removed them from the menu once, the regulars complained, so the dishes will remain, though their sides may vary to reflect the season. “People want what they’re used to,” he says.

One bite of the tenderloin was all I needed to become a huge fan myself. It’s brined for 24 hours, rubbed with molasses and grilled, and when I ordered it, it was served with a sweet potato purée, Georgia apple walnut relish and some fried onions. Savory and sweet with a hint of bitter thanks to the molasses, the meat was juicy and cooked to perfection. 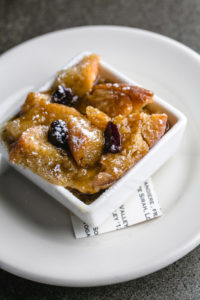 The bread pudding with bourbon sauce is a perfect end to a perfect meal.

Even if you’re feeling stuffed or dining on a budget, you should make room for dessert. Order one for $5 or a trio for $14. My husband and I shared the bread pudding with bourbon sauce—as warm and comforting as a hug. The vanilla, caramel, oak and bourbon notes wonderfully pushed through the sugar-yeast flavors. Though the serving is small, we each enjoyed multiple bites, which proved to be the perfect amount to end the meal on a sweet note.

Wisteria remains a cozy neighborhood restaurant, even as it’s evolved along with Inman Park over the years. “We try to stay true to the neighborhood,” says Hill. “When I first opened on this side of town, there were two or three other restaurants. Now there are about 100 and more on the way, so the competition has changed, but I’m still doing fine.” That’s great news, as is the fact that Wisteria will start serving brunch sometime this year. 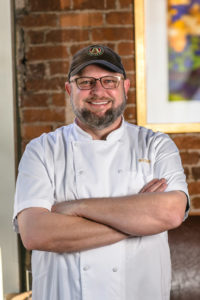 What’s your favorite thing on the menu?

That’s such a hard one. It depends on the time of day. I love our Caesar salad, sea scallops, fried calamari, mac and cheese, pork tenderloin and skate wing.

What takes the longest to prepare?

What do you most look forward to cooking each spring?

Beautiful purple okra. I’m a big fan of okra. My grandmother always cooked it, and I could eat it like candy all day long.

Salmon. I know it’s good, but I’ve cooked it for more than 30 years now, and it’s a standard food that I just don’t like. Other than that, I like every fish. 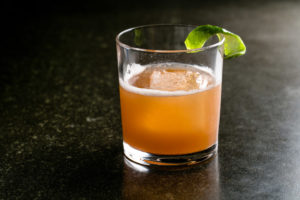 Enjoy a cocktail
with your meal? Give
the Plum Cooler a try.

The Voice of Atlanta Radio