I’ve never played a round of golf in my life, but my favorite mode of transport is the golf cart. My husband and I had a blast tooling around in our complimentary cart during our stay at Pursell Farms, a 3,200-acre estate in Sylacauga, Alabama. 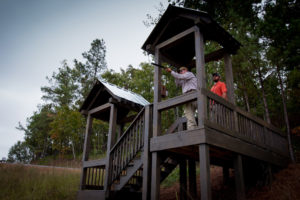 Taking aim at one of the stands at the Orvis Shooting Grounds.

The resort, located about 2.5 hours west of Atlanta, is on a farm that’s been in the Pursell family for four generations. A company they owned invented a slow-release fertilizer and built a golf course as a living demonstration to potential buyers of how well it worked. When they sold that company, the property became a resort.

My husband played a round on the FarmLinks course and loved being able to drive the cart directly from our cabin to the course, which he found surprisingly hilly—Pursell is in the foothills of the Appalachian Mountains. “At one point we had a view of Gantts Quarry in the distance, where the marble for the Lincoln Memorial was mined,” he told me.

While he golfed, I visited the Spring House Spa for the signature massage combining “pressure points and spiraling movements.” Later, we joined up for a round of sporting clays at the Orvis Shooting Grounds, where a patient instructor showed us how to hold, reload and fire a gun. I gave it my best shot trying to hit those flying orange clays. Fly-fishing and wing shooting lessons are also available. The accommodations at Pursell include cabins and cottages, both with four private bedrooms opening onto a large common area. Cottages are slightly larger with a bigger kitchenette and a fireplace. Stay in either and you get a golf cart to use for free. 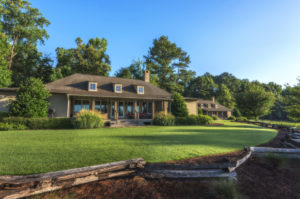 The cottages at Pursell Farms each boast a large great room, kitchen and four guestrooms.

A luxurious three-story, 40-room inn was recently added, with queen and king rooms, a pool, fitness center, bocce ball court, fire pit and artwork in all the rooms done by the owner’s daughter and artist-in-residence, Vaughan Pursell Spanjer. The premium balcony rooms have nice views of the fairway. A new 3-mile walking/biking trail starts near the inn.

With the addition of the inn also came more activities, including cooking demonstrations (homemade pretzels and dipping sauce!) and painting classes for a small fee. Yoga on top of Chalybeate Mountain and Tea Time on the Terrace every Friday and Saturday are complimentary.

Popular adventures include horseback riding and the UTV Mountain Experience, in which guests drive their own four-seat John Deere Gator on dirt trails and gravel roads up Sulphur Mountain, where they can enjoy views of the Appalachians and Lay Lake. 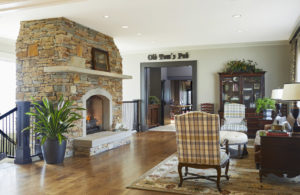 Old Tom’s Pub is a popular place to gather for casual pub fare.

The original restaurant, The Clubhouse Grille, serves breakfast and lunch, and is the choice for golfers before or after a round. Executive chef Andrea Griffith runs the kitchen of the new signature restaurant, Arrington, where guests can dine on locally sourced food with produce from the on-site vegetable garden and enjoy a panorama of the 18th fairway. The Scottish-style Old Tom’s Pub is open for lunch daily with menu items that include soups, salads, pizzas and burgers in addition to Southern poutine, Scotch eggs and pig candy (candied bacon). The decor includes a pool table once owned by Jim Nabors, a family friend who was born and raised in Sylacauga, with photos of stars such as Dean Martin, Ronald Reagan and Dolly Parton who’ve played on it lining the walls.

A Dose of the Ocean