Whether you’ve cozied up to the bar recently at Condesa Coffee in Old Fourth Ward or browsed the shelves at My Friend’s Growler Shop in Grant Park, chances are, you’ve spotted kombucha—on tap or in bottles— around town mixed in among your favorite, traditional brews. And although the fizzy, fermented beverage is just now finding its way into the mainstream, one local brewer is about to make it a regular part of the local food-and-drink experience.

Golda Kombucha, purveyor of the fizzy beverage since 2013, is opening a brewery and taproom of its own this winter, overlooking the BeltLine on the Westside Trail. It’ll be Georgia’s first kombucha brewery and one of only three in the Southeast.

If you’ve never had kombucha before, it’s a fermented tea that’s been around for thousands of years. It’s packed with probiotics that aid in digestion, and it’s purported to support the immune system. To make it, tea is combined with water, sugar and a yeast-bacteria culture, then fermented for a couple weeks in a warm room. As-is, kombucha is tart and, to some, acerbic. Suffice to say, it’s not for everyone. 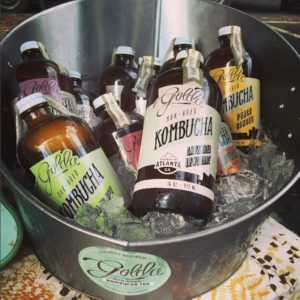 Golda Kombucha’s founder, Melanie Wade, however, liked kombucha from the very first sip and knew she wanted to learn how to make it. She first tried it while visiting her grandmother, Golda, in Virginia’s Appalachian Mountains. Golda had been making kombucha for years and was a living testament of its health benefits—she rarely got sick.

“I took home her starter culture and played around with her recipes, and that’s how it started,” says Wade. Now she makes a variety of seasonal flavors using Southerngrown fruits and herbs, and a blend of green and black teas. Popular flavors throughout the year include strawberry-lavender, apple-ginger and blackberry-basil.

Initially, Golda Kombucha was a side hustle for Wade, something she only sold at farmers markets and festivals. As it grew, though, she was able to leave her marketing job, and now the product is sold at more than 100 Kroger locations, as well as restaurants and bars around town. The brewery is the next big step.

The 6,000-square-foot space will feature a windowed garage door that opens to the BeltLine along with two patios—one on the BeltLine and one in a courtyard. Wade describes the space as very rustic and folksy, with a touch of elegance. “But you can come in workout clothes,” she says.

Besides purchasing kombucha by the pint, customers will be able to buy kombucha floats with gelato, flights and various fermented products from other vendors. Snacks will include vegan cheese boards accompanied by pickles. Eventually, a liquor license will complete the drinking experience, but Wade hopes people will come and hang out for the ’booch, not the booze.

And what does Golda, now 96, think about the eponymous business? “She asks about the business all the time. She’s my number one fan,” says Wade.

Too sour for your taste?
Consider these alternative ways to use your ‘booch:
Mix it in to salad dressing.
If it goes sour, use it as a hair rinse.
Freeze for tart popsicles!
Use it as a cocktail mix-in.