Colors of the Coast

Joseph and Angelika knew their 1925 bungalow was an architectural gem.

When Angelika and Joseph Taylor drove by the 1925 bungalow on Virginia Avenue in Virginia- Highland, they knew the house would be their next home. It wasn’t because it attracted attention for its beauty. On the contrary, “It was a total dump,” Joseph says. “But it had great curb appeal and beautiful gables.” Angelika says they loved how cute and original it is, plus, the location couldn’t be beat.

There was just one problem: The house wasn’t for sale. But that didn’t deter the couple. They walked up to the front door, knocked and, when the homeowners opened the door, made an offer to purchase the home. Unfortunately, it was declined.

However, Angelika refused to give up. She wrote a two-page letter explaining why she and her husband wanted to purchase the home. “I poured my guts out in a very personal letter, including the fact that we would never tear it down like we continue to see in our nostalgic town,” Angelika says. “I said we would keep as many original items in the house as possible and we wanted to raise our family there.” The couple’s real estate agent passed the letter on to the homeowners, and, surprisingly, they bit. The Taylors purchased the house in 2011 and set out to renovate it. 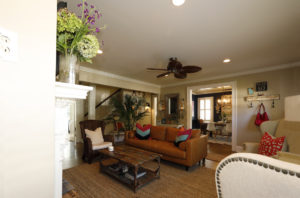 Sadly, the previous homeowners hadn’t invested much in maintenance and upkeep. For example, the Taylors wanted to keep the home’s original hardwood flooring, but it had 7-inch dips that had to be leveled out. They also had to insulate the entire house, which had barely any to speak of. However, when removing sheetrock in the front room, which served as an office, the Taylors discovered a pleasant surprise: beautiful brick arches that turned out to be part of the original front porch. “The arches just popped out,” Angelika says.

When exploring the full attic, the Taylors were caught off guard by how large the space was. “When we walked up the stairs and opened that door, it was like, ‘Bingo,’” Angelika says. “These people don’t know what they have.” The couple lifted up one side of the roof and created their 4-year-old son’s room and playroom, as well as the master suite. “We were  surprised at how much more room we could get out of the space and that we could build out the dormers because that adds so much space,” Angelika says. “So we didn’t realize we could have as much space as we could just by raising one side of the roof.”

Other renovations included moving some doorways for better flow, reconfiguring the kitchen and adding doors from the kitchen to the new back deck. In addition, they added a solid, wood shingle roof that supports 20 solar panels. “We’re almost off the grid,” Angelika says. 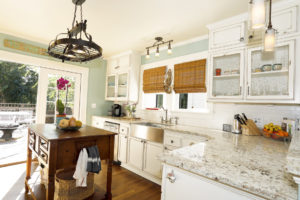 Angelika found and distressed the kitchen cabinets to give them a dated look.

Once the major renovation was completed, Angelika, owner and principal of Angelika Taylor Interiors, set about creating a design scheme that turned the house into a home. That meant heading to some of her favorite shopping spots: Habitat ReStore, Goodwill, flea markets, T.J. Maxx and overstock.com. “I scavenged our kitchen cabinets so that they were more dated,” she says. “Then Joe and I sanded, painted, distressed and sealed every one [of those cabinets]. And our kitchen looks pretty original.”

Angelika furnished the house with more pieces she scavenged. For instance, she made the dining room table herself from free pallets she found listed on her neighborhood website. “I just had it in my mind that that’s what I wanted, and I wasn’t going to pay full price for it,” she says. “And I just found chairs to go with it.” 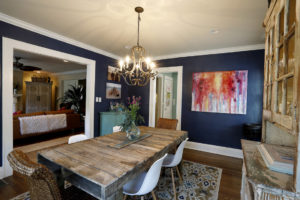 Angelika designed and built the dining table from discarded pallets.

The cabinets in the dining room were the result of dumpster diving. Originally, they were stark white, but Angelika distressed them with her own faux finishing techniques. “I love that I gave whole new life to something that someone didn’t even want,” she says of reimagining the cabinets. “That’s my whole goal. I really love repurposing and trying not to spend money on stuff that people are giving away.”

The couple did purchase the living room couch, but then Angelika surrounded it with repurposed pieces. She already owned the wingback chairs but reupholstered them to better complement the space. She also designed the couch pillows that were made by her seamstress. She used to sew her own pillows, something she did in her previous business wherein she and her former business partner designed and fabricated custom window treatments, bedding, pillows and upholstery. “I’m big into textiles,” Angelika says. “Fabric is where I got my start…and it inspires me to create unique designs for my clients’ homes.”

The brown chair in the living room is seagrass, which Angelika used to incorporate a natural touch into the interior. “I love to do a lot of jute and seagrass because they’re textural and neutral,” she says, adding that using natural fibers in a house bring the outdoors in. “I feel like I’m always outside at the beach. 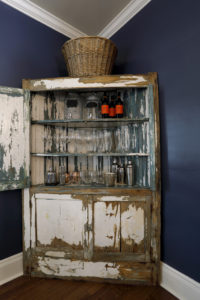 Angelika used her own faux finishing techniques to distress the dining room cabinets.

That’s my beachy side.” The Taylors are big fans of the beach, not surprising given that they married on a beach in Mexico. That “beachy side” is further revealed in the Taylors’ affection for the front porch. “I love it. That’s what living down here is all about,” Angelika says, referring to the Southern lifestyle wherein the front porch serves as an extension of the home. “I consider the porch our living room, because you can sit outside on the front porch and watch people go by. I think it’s so charming. I love that we have a front yard, so we can watch our kids play.”

Throughout the home, Angelika used art, decorative pillows, rugs and accessories such as picture frames to add pops of color. Examples include the dining room artwork filled with coral, orange, pinks and purples; the aqua picture frames in the hallway; and the aqua and seafoam green shower curtain in the downstairs bathroom. “Coral and aqua: That’s my essence,” Angelika says. It’s most prominent on the home’s front door, which is a weathered coral hue. “It’s our favorite color,” she says. “It’s like the inside of a conch shell.”

Angelika sums up her home aesthetic as “funky Southern coastal,” where she incorporates texture, color and a blend of old and new. “Our home is inspired by the coast; we’re beach bums, and I have a gypsy soul,” she says. “That’s why I love thrifting and why we love colorful and casual things that allow us to be a family and not yell at each other if something spills or someone rams into my cabinets. I won’t be upset because I didn’t spend $25,000 on kitchen cabinets.”

Not a day goes by that Angelika and Joseph aren’t grateful they didn’t give up on buying this house. “I love pulling up in the driveway and walking in the front door,” Angelika says. “I appreciate this house every time I walk in.” 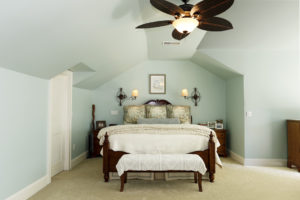 Angelika’s use of aqua in the master bedroom creates a quiet, relaxing space.