Those healthy, carefree summer days when kids rode bikes through their neighborhoods, climbed trees and played games outdoors have had a rebirth at Trees Atlanta’s Junior TreeKeeper Summer Camp. “We want to give kids an opportunity to spend time in the urban forests right outside their back doors and develop a love of nature,” says Judy Yi, director of education. “Our mission is for kids to have fun while learning how to become good stewards of the earth.”

Youth education directors Colby Lyles and Sabrina Attimy lead the groups, along with trained volunteers. Both are well qualified for their jobs. Lyles received a degree in outdoor education at Georgia College and State University in Milledgeville with a minor in environmental sciences, then gravitated toward environmental education. “If we give kids a good experience outdoors and teach them about nature, they’ll, hopefully, become committed to protecting our natural resources,” says Lyles, who leads the camps.

Attimy, a graduate of Georgia State University with a degree in biology, has worked in the environmental education field for the last seven years. “Initially, my interest was in eco-systems and animals, but I wanted to have more exposure to trees and plants while staying in the education field,” she says. “At Trees Atlanta, I have the best of both.” 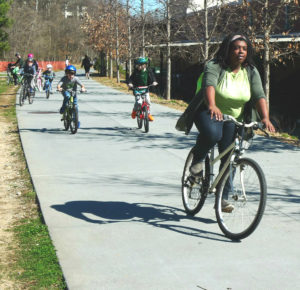 A typical day at Junior TreeKeeper Camp begins at Trees Atlanta’s education center, The TreeHouse, on Krog Street. The BeltLine Arboretum becomes their outdoor classroom, where they have fun learning the importance of taking care of Atlanta’s urban forest. But there is one catch before the fun starts: Every child must be able to ride a bike.

Lyles and Attimy will lead a parade of campers from both age groups on daily bike rides. Team Quercus campers ride trikes or bikes with training wheels and remain in and around the BeltLine’s arboretum, where they explore the soil, go birding, learn to identify common trees and create crafts from objects found in nature.

The city becomes a playground for the Acers who pedal to outdoor venues like the Botanical Garden. “Some days we ride 14 miles,” says Lyles. “At the Fernbank Forest, kids hike, participate in a scavenger hunt and help remove invasive species. By week’s end, they are much more competent and confident on their bikes and have a real sense of accomplishment.”

Third-grader Noemi Reina participated in Junior TreeKeepers during spring break. “She loved every minute, especially birding,” says her mother, Vielka Reina. “When they went to the Botanical Garden, they learned all about zinnias, and each child came home with a plant. When hers began to bud, she was absolutely thrilled. She definitely wants to go back.”

Junior TreeKeepers is only one of the nonprofit’s many educational programs. Attimy heads up Urban Tree Trackers, an in-school program that reaches more than 3,000 metro school kids from kindergarten through high school every year. Programs are also offered for kids who are home schooled and pre-schoolers, as well as camps during school breaks.

HEAD FOR THE HILL!