You’re driving along Ponce when a giant eagle feather flies past in the left lane. Or maybe some sunflowers and a Nepali peace flag sail by. If so, you’ve probably just seen a painted car from the collection curated by Candler Park artist William Massey.

Since 2014, Massey has been introducing local artists to car owners wanting to add some personalized art to their cars. How did the Atlanta sculptor become the match.com for painted cars?

“It happened after returning from a trip to India,” Massey explains. “I was intrigued by how people painted what they wanted to share on their cars. It might be ‘I have a blind spot; please honk,’ or a depiction of the god that they worship or a family crest. It wasn’t really what they put on the car, just the fact that they did it, that they weren’t scared or ashamed to alter the factory paint job with something they felt the need to share.” 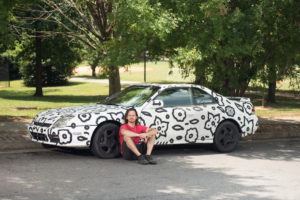 Massey liked the concept so much that when he got home, he painted his own car gray, getting it ready for when inspiration struck. It didn’t take long. Two weeks later, Massey was having an art exhibit. He parked his car, put out an array of paints and told everyone there to have at it. “It was crazy, but fun,” he says.

Afterward, as he drove his multi-colored car around Atlanta, Massey started thinking: What if he made the painting more intentional? He asked an artist friend if he would create a mural on his car, painting whatever he wanted. The answer was an excited “yes.”

“It came out almost the opposite of my personality, with a sort of Japanese anime feel. It was fun because it was different. A couple of weeks later, a friend asked if I could find an artist for their car, and a few weeks after that, another, and the trend has just continued,” says Massey. He named the project Car Canvas. “I haven’t pushed for it to grow; it did it on its own.”

So far, Car Canvas has produced about a dozen uniquely painted autos and one 45-foot bus. Eight more cars are on the docket.

Like the moving murals, the business model is not typical. No money changes hands. Massey explains it this way: “I love connecting people and getting art out into the world in a fresh way. Car owners get to share something they love. And artists get more exposure than they would from a giant billboard.

The best part is when I roll down the road, people just light up. It literally creates joy in the places I go. Women say, ‘That is so cute.’ Men are like, ‘That’s dope,’ Kids say, ‘Mom, look at that cool car.’ Everyone can relate in some way.”

Along with Car Canvas, Massey is an established artist, known for his large-scale, found-art sculptures. His third and current installation on the Atlanta BeltLine, “The Art of Reconciliation,” involved more than 200 people, “hipsters, homeless, veterans, kids,” in its creation. The sculpture embodies Massey’s commitment to bringing people together through art.

“I live at the crux of business and joy,” he says, “and joy always trumps money in my mind.”