A burgeoning fitness movement is happening that is the opposite of the popular boot-camp models we’ve seen in the past. Instead of stretching you to heart-palpitating, muscle-quaking limits—and perhaps even stressing you out or causing pain in the process— some new studios and classes are all about bringing on the fun or the calm. The goal: feeling inspired and rejuvenated, getting stronger and having a great time while you’re at it. Hear, hear to that!

Here are a few of our new favorites:

This welcoming little studio with bright-white walls and a large picture window overlooks a walkway in the new Larkin on Memorial development. It offers Pound, a fitness class that encourages you to rock out while burning calories, as well as spin and barre. In this jammin’ 45-minute cardio session, you’ll use drumsticks and “pound it out“ with choreography that syncs up with pop and dance tracks. The lighthearted concept, also available at Vibe Ride’s Midtown location, will have you laughing throughout, while squat after squat will make your buns and legs feel the burn.

Yogis may recognize this space. Until recently, it was Infinity Yoga, and it still boasts the same exposed brick, wood ceilings and loft-like windows. Now YogaWorks (with more than 45 locations nationwide and several in Atlanta), the class offerings include some pretty chill options amongst its more active vinyasa flow classes. Find your zen in Warm Yin, a 60-minute yoga class that focuses on deep stretches and holding poses for two to four minutes each. You’ll use props such as a bolster, a blanket and blocks, and feel parts of your body from hips to chest open up. Best of all? The poses not only improve flexibility, but also give your mind a chance to decompress and initiate deep relaxation. 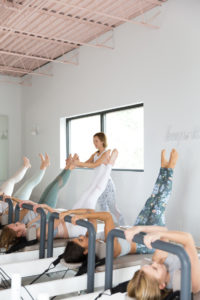 A gorgeous new Pilates studio in Inman Park, sister to its West Midtown location, The Daily does everything in its girl power to create an unintimidating environment— even though you might initially think “uh oh” when you eye its brand-new, white and gray Reformer machines. The classes, a mixture of reformer and nonreformer (mat) options, will challenge you for sure, but the serene backdrop of white walls, ballet-pink ceilings and inspirational “Do It on the Daily” and “Keep It Peachy” quotes will keep you chill through those muscle-isolating movements. Plus, the classes are small and approachable, and you can take a foundational session to learn the basics if you’re new to Pilates.