For some, yoga is an outlet for releasing the tensions of a long work day or a way to master those bendy handstand moves you see experienced yogis doing on Instagram. Then there are people like Annelise Lonidier, owner of Sacred Thread Yoga, for whom yoga is a saving grace.

A Greensboro, North Carolina, native, Lonidier found herself in Atlanta about five years ago as the result of a job move during her 15 years in the medical device field, working with surgeons to create products for operating rooms. But during college at the University of North Carolina and throughout the years she spent growing her corporate career, yoga was always part of her life. After a post-college move to Boston, she completed yoga teacher training and began instructing once or twice a week on the side. “When I moved to Atlanta, there weren’t as many studios as there are now,” Lonidier says, “so that got me wanting to have a studio.” After two years maintaining her corporate gig while getting Sacred Thread Yoga up and running, she eventually felt comfortable transitioning to teaching and operating the studio full-time. She’s now the owner of Sacred Thread studios in East Atlanta, Old Fourth Ward and Hapeville, and co-owner of Sacred Chill West in northwest Atlanta. 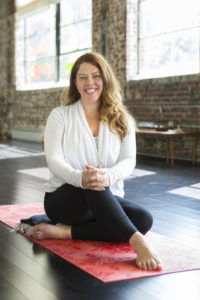 But back to that “saving grace” part. “I think the cool thing about yoga is that everybody has a connection if you do it for long enough, and everybody’s connection is going to be different,” Lonidier explains. “For me, it helped me just to accept myself.”

Growing up in a low-income household, she says things such as mental health weren’t as high a priority as keeping a roof over her family’s heads. “As I started to get deeper into the philosophy behind yoga, I realized I had a lot of healing to do from things that I had experienced growing up. When I started doing yoga, that idea of self-care and having healthy habits was what hooked me.” Her time on the mat, she explains, was therapy—a way to get to know herself and become comfortable in her own skin.

Along with running her studios and teaching, Lonidier also works with the organization Operation Peace to support local families through educational assistance and community resources. She also participated in a Planned Parenthood fundraiser in September and, this month, is working with her Sacred Chill co-owners Octavia Raheem and Meryl Arnett on a new festival dubbed Westside Chill, happening October 14 at Whittier Mill Park in northwest Atlanta. “It’s a stillness-to-sound festival, starting with meditation and building up to a peak with a DJ,” Lonidier explains. “It’s going to be very musically focused. We’ll have yoga, meditation and representations from local businesses on the Westside.”

When she’s not hard at work, Lonidier can be found hanging out in Cabbagetown and Old Fourth Ward, home to the second Sacred Thread location, complete with a rooftop patio (full-moon meditation, anyone?).

“In the medical field, I worked developing products and going into surgery, and quite often, the patients on the table were not taking care of themselves,” Lonidier says. “They had high blood pressure and diabetes. I think the first 30 years of my life were about [asking], how can we take better care of ourselves? Everybody can do yoga; it’s really a matter of knowing that there are different styles and approaches, and finding the right teacher for you.”