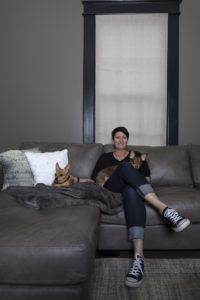 Twelve years ago, Laura Saunders, owner of Inman Park Pet Works and the Krog Street Pet Works kiosk, came to Atlanta from Los Angeles looking for a change of pace. As she puts it, “Although it’s pretty, LA is really not my lifestyle. It’s just too Hollywood. Not that Atlanta’s not Hollywood. It came with me,” she jokes, referring to the city’s reputation as the Hollywood of the South. Her parents moved to Atlanta 25 years ago, and when visiting them, she took the Inman Park Tour of Homes.

“There was something about Inman Park that I found to be really special,” Saunders says. “I love the old homes, I love the architecture, I love the history, so when I decided to leave LA, I looked in several different areas of the country for places to live, but I just kept coming back to Inman Park.” 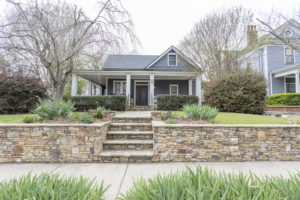 So Saunders came to see what was available. At the time, the inventory of homes for sale was low. “I got really lucky,” she says. “This house had just been put on the market. Well, I’m not sure it was on the market, or they were just showing it to agents, but I was able to get inside and look around. I fell in love with the house immediately; it just suited me.”

“The house” is a 1,965-square-foot, 1929 bungalow. The original structure was one floor, but a previous homeowner added a second. Initially, Saunders renovated approximately 25 percent of the space, including some in the kitchen, although she hopes to modernize that area a bit more. In 2015, she enlisted the services of Jeffrey B. Baker, design director of Jeffrey Bruce Baker Designs just north of Morningside-Lenox Park, to start on the rooms at the front of the house as well as the upstairs.

“I’ve been wanting to do this renovation since I bought this house,” Saunders says. “It took me a long time to find Jeffrey and to incorporate what I wanted to but to stay true to the original design of the house.” 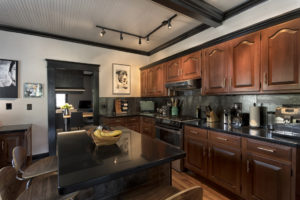 Saunders did some initial kitchen renovations when she first moved in, but hopes to do more.

When Saunders purchased the home, the front rooms were very small and closed off to each other, with the dining and living rooms separated by back-to-back brick fireplaces. Those were removed and replaced with a modern fireplace and wet bar that opened up the two rooms. The original powder room was cut down in size to improve its overall design. On the second floor, the balcony stairway and dormer windows were pushed out to create an additional 200 square feet of space.

“I really like modern design, and the house is clearly not modern,” she says. “I wanted to incorporate some modern, but have it fit in well with the original design. Jeffrey came up with exactly the design I wanted, and it fits in with the original aspects of the house.” 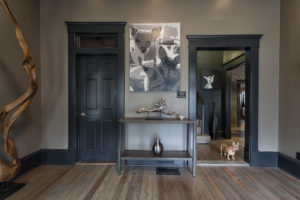 Saunders used art to add interest and texture throughout the home.

One of her favorite things of the renovation is the downstairs fireplace. At first glance, it doesn’t look like a fireplace: It appears to be cabinetry and a wet bar separating the living room from the dining room. The burn unit rests in the bottom cabinet, so when lit, the flames rise up from it.

“My whole idea was to create a quiet, serene, calming setting so when I come home from work, I can have a really nice place to relax,” Saunders says. “We definitely accomplished that.”

When furnishing the house, Saunders searched for comfortable pieces that added warmth and enhanced the relaxing setting she had created. One example is the custom leather couch in the living room that she purchased from COCOCO Home in Buckhead. “I wanted a really big, cushy place to hang out,” says Saunders, who loves to do just that with her dogs, Belly and Olive. She complemented the couch with a blue chair from CB2, a cream chair from All Modern Design and a Cantoni coffee table. 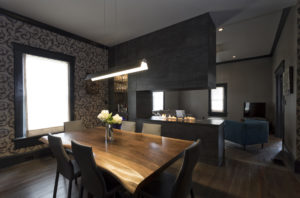 Baker designed the base to hold the custom-made, live-edge dining table.

Saunders also had very specific ideas for the master bathroom. “I wanted a clean, big, modern, open shower area,” she says. The master bath now features a large double vanity topped by framed mirrors, along with the aforementioned shower.

When decorating the home, Saunders opted for a color palette drawn from shades in the downstairs wallpaper. Baker agrees the hues were ideal for the house. “Laura loves the blues, the coppers, the medium wood tones and the grays,” he says. “We added a lot of gray in. We refinished all the floors in the house [and created] the gray and brown mix.” 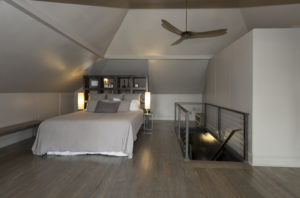 Saunders set her Sleep Number bed against a bookcase to create a unique headboard.

Saunders used artwork to add interest and texture to the home. In the front entry she posed a tree root sculpture purchased from Made Again in Inman Park, and hung a portrait of her dogs painted by Beth Bailiff, an artist and friend. There’s also a painting of a Chihuahua by a Spanish artist whose identity Saunders doesn’t know. “The painting is a little dark, but there’s something about it,” she says. “I named him Oscar, and he’s my little protector.”

With the renovation complete, Saunders couldn’t be happier with the results. “I think my house stays true to what I really like and has its own design aesthetic,” she says. “[The interior has] a European modern style, very clean, but it’s still warm and comfortable.”

With its double vanity and dual mirrors, the master bathroom is now more open and modern.

Baker refers to the house as “truly Southern modern,” which combines the home’s covered front porches and screened-in back porch with the interior’s more contemporary design and décor. “We believe we’ve done something different and unique here,” he says. “This house still has the formality to it, so it’s a very tailored, dressedup modern. We kept the essence of the architecture and how this house was built [on the exterior].”