In 2002, Clay Snider wasn’t looking to purchase any property when he discovered a home in Midtown just a few blocks from Piedmont Park. He literally fell over the “for sale” sign in front of the house one day while taking a walk and talking on his phone. When he looked up, he was captivated by what he saw. “It was run down; nothing had been done to it in 25 years, and I wanted to put my mark on it,” says Snider, an interior designer and owner of Clay Snider Interiors in Midtown. 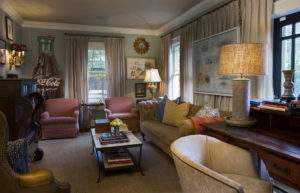 The home, a 1930 bungalow, is connected via a garage to a carriage house and two apartments, both of which sit behind the house. A previous owner had added the other buildings to accommodate a large family, and Snider liked the idea of having rental property.

Snider purchased the lot and set to work on the 1,500-square-foot home with two bedrooms, two bathrooms, a kitchen, a living room and a dining room. He removed a wall in the living room to expand the space and create a foyer, remodeled the kitchen with a commercial stove, installed new marble in the bathrooms and created a front courtyard reminiscent of those found in New Orleans. 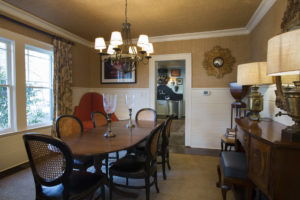 Taking full advantage of every surface in the dining room, Snider carried the grasscloth up the walls and across the ceiling.

While the architecture itself didn’t present any obstacles to the remodel, Snider did have to learn how to work with a small space, especially when it came to storage. “You have to be creative with where to place things because the rooms are not huge, and the closets are not big,” he says. It’s been a challenge to think outside the box.” For example, Snider makes sure all furniture has usable drawers and/ or shelves. “In the kitchen I use some pots as decorative pieces, but they can also be used to cook with,” he says.

Snider furnished the home with a variety of pieces found at estate sales and Scott Antique Markets, with a few family furnishings thrown in. For the living room he chose an ultra-suede couch, and he put leather chairs in the dining room. Because he rents the property out via Airbnb, he wanted pieces that were easy to clean. In an innovative turn, he used pleated painters’ drop cloths for drapes in the living room. 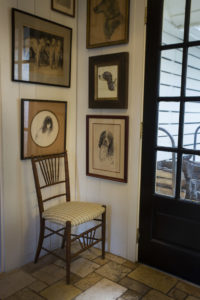 The drawings in the back foyer pay homage to Snider’s own Springer spaniels.

Throughout the home, Snider’s love of art is evident with an interesting mix of drawings and paintings. In particular, he loves the monkey portrait in the hallway that he found online at estatesales.net. In the foyer, he built a themed collection of men’s headshots. And in the foyer by the back door, a collection of spaniels pays homage to Snider’s own Springer spaniels. Like the furnishings, much of the artwork came from Scott and other estate sales.

A particular favorite is the portrait in the front foyer of an old man wearing overalls, which Snider received from a design client. “He looks like my grandfather,” he says. Giving a nod to pop art, Snider also loves the floor to ceiling Coca-Cola bottle sign that resides in one corner of the living room. He spotted it at a “junk store” in North Georgia and brought it home.

Choosing the color palette for the home was a no-brainer for Snider. He used Farrow & Ball’s Light Blue No. 22, his favorite color. “Every room is a shade of this color,” he says. “It’s calming, relaxing.” The remainder of the color palette includes beige and white, which is not limited to the walls. 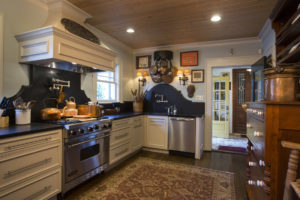 During the kitchen renovation, Snider took the opportunity to install a commercial stove.

For example, in the dining room, Snider took the grasscloth beyond the walls and across the ceiling, adding texture throughout the space. “People forget about their ceilings and want to paint them white,” he says. “I hate a white ceiling. I either paint them a shade of the wall, or a color or use wallpaper.”

In 2016, Snider listed the home on Airbnb, and it’s proved to be popular.

In fact, last year he had a booking rate of approximately 70 percent for the entire year. “That gives me time to make sure any maintenance issues that come up can be addressed,” he says.

Renting out the property has resulted in one situation Snider didn’t imagine: having to constantly change out bedding and towels. “I never thought I’d own so many towels and pillows,” he says. “I have an entire little room (in his home across the street) dedicated to linens and extra blankets.” 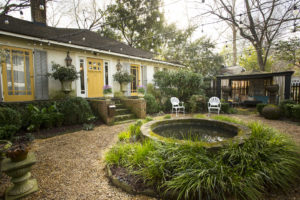 Snider’s favorite space is the outdoor courtyard, which he says is the perfect gathering spot with friends.

While Snider is satisfied with the changes he made inside the home, it’s the outside he really loves. Surrounded by fencing and lush landscaping that includes five live oak trees, the front courtyard is Snider’s favorite spot. The centerpiece is a multi-tiered fountain and a gazebo filled with a hodgepodge of outdoor furniture, providing a perfect gathering spot for visitors. (The fountain and gazebo were added to the courtyard after we photographed the home for this issue.) “Although it’s small, it’s been great for entertaining,” he says.

In fact, the courtyard attracts quite a few sightseers. Snider can share many tales of people peering through the Egyptian doors that hide the courtyard from the sidewalk. Once, he looked out the window and saw some folks in a “full-on photo shoot” posing next to the fountain and taking pictures. Others have asked him if they could rent the courtyard for a wedding (that’s a firm “no”). 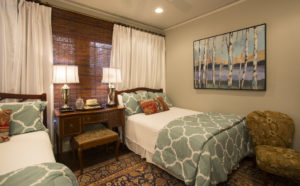 Snider furnished the bedrooms with pieces from estate sales and Scott Antique Markets.

When describing the theme of the house, Snider jokingly calls it “town and country.” Having grown up on a farm in Americus, he says the home contains everything he loves—both rustic and sophisticated touches. “I feel like I’ve done as much as I can without [adding another floor], and we’re not doing that,” he says.