Recently in need of a break from our routines but without the luxury of time for a long vacation, my husband and I found ourselves searching for a local escape.

After a bit of scouting, I hit the jackpot: a fairytale treehouse in East Atlanta, nestled in a thicket of bamboo on, of all things, an alpaca farm. It was kooky, romantic and only a 5-mile drive from our Virginia- Highland home. Open for fewer than five months, the treehouse had garnered nothing but raves from online reviewers. And there was an opening that Friday night.

Two days later, we were pulling into a long, gravel driveway shaded by tall pines. “You can park right there,” a woman called to us. Smiling, friendly and exuding energy, she turned out to be Kara O’Brien, one of the Alpaca Treehouse owners. 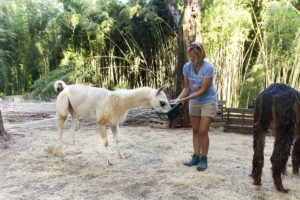 O’Brien immediately offered us a tour of the farm. Our first stop was alongside a wooden fence, and there they were: four shaggy alpacas and a large white llama, none as excited to see us as we were to see them.

It was their dinnertime, and as O’Brien filled their food bins she gave us the rundown on each camelid’s personality. She began with chocolate-brown Ariana Dandylion, who, O’Brien told us, was “super sweet-slash-very naughty.”

Right then, as if to prove her naughtiness, Ariana snuck up and gave Caitlin Tastee, another one of the farm’s furry inhabitants, a solid body slam, pushing her nose away from a side of alfalfa. “No, Ariana!” O’Brien shouted, nudging the would-be sprout thief away. Caitlin Tastee was pregnant, O’Brien explained, and thus needed ample nutrition. Paloma Piper was pregnant, too, she told us. [It later turned out that Paloma wasn’t pregnant, just plump.] Sunny Shevoun and Dali Llama completed the beastly brood.

Along with O’Brien, whose knowledge of animals comes entirely from her own research, we were joined on our tour by co-owner Kate Giroux, who led us through a bamboo grove to the hidden treehouse. Cradled atop 15-foot, black locust tree trunks, a small cottage appeared, glowing in the shafts of sunlight.

Once inside, I was struck by the treehouse’s multi-shade wooden walls and its vaulted ceiling, all constructed out of pine beaded board salvaged from Civil War-era homes. Almost everything harkened to the late 1800s: the stained glass, French door entry; tin roof; scattered antiques. O’Brien told us the treehouse consisted almost entirely of reclaimed material. So peaceful, so beautiful, so … Suddenly, my pleasure gave way to the practical. “Is there a—” “Toilet?” O’Brien completes my question with a laugh. Yes, there was a compostable toilet, heat and air-conditioning, a coffee maker, a fridge and a complimentary bottle of wine. Memory foam beds awaited in the loft above, and a full marble bathroom was close to the cabin, accessible via a path. 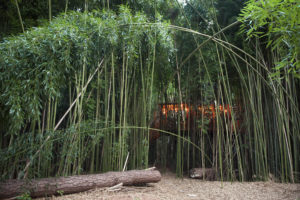 We were hungry by now and, per O’Brien’s suggestion, decided on Argosy in nearby East Atlanta Village, a small and quirky neighborhood with a seamless mix of graffiti, quality restaurants, tattoo shops and clothing boutiques. There, we enjoyed crispy tofu and pizza and marveled at the restaurant’s impressive beer menu.

When we returned to the treehouse, we found it twinkling with tiny lights. Turning to my husband, I said, “I’m happy.” He smiled and nodded in agreement. We fell asleep to the whisper of bamboo fronds and cool air from the loft window brushing against our faces. In the morning, we relaxed with coffee and oranges before reluctantly leaving. A few minutes later, we were back home, refreshed and feeling like we’d traveled to a faraway place. Just what we’d wanted, right here at home in Atlanta.