Nearly 100,000 Koreans live in Metro Atlanta, where hundreds of Korean restaurants line the streets of Duluth and hide in strip malls on Buford Highway. And yet, in Atlanta city proper, there were few, if any, true Korean BBQ restaurants—the one’s outfitted with those beloved, DIY tabletop grills that fill up seemingly every plaza and food court outside I-285—until September 2016. That’s when former Craft Izakaya partner and general manager Richard Tang opened his über-hip Char Korean Bar & Grill in Inman Quarter, tabletop grills and all. 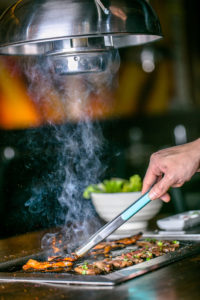 Searing meat on a traditional grilltop.

The intimate space is cool and trendy, with a young, lively vibe, particularly on the weekends, and walls lined with Asian street art from Atlanta artist Brandon Sadler, a.k.a. Rising Red Lotus. Likely the first thing you’ll notice when you walk in are the gas-powered tabletop grills with sleek vent fans floating above. They’re not obtrusive; quite the opposite: They’re beautifully designed and flow seamlessly with the modern industrial aesthetic, proving that Char is the real deal when it comes to Korean BBQ. But a cursory glance around the dining room proves there’s much more than tradition happening here. In fact, the playful space is filled with irreverent quirks, such as the sizable list of the commandments printed on one wall. “Political correctness is not part of our policy; being kind is,” one reads. That explains the caricature of Kim Jong-un and his minime in the bathroom and the names of the barbecue meat combos (they’re named for North Korean political leaders).

The double-sided bar offers stellar craft cocktails both inside and on the covered patio that is seasonally equipped. When the weather warms up, the open-air space flows effortlessly into the bustling neighborhood, much like a European cafe, but when I dined at Char in chillier months, glass partitions enveloped the patio (no tacky plastic roll-ups here), which was outfitted with powerful heaters. Char even provided blankets at our seats. 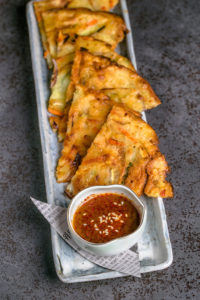 Truly, they’ve got hospitality down pat. The servers are friendly and helpful, and everyone generally seems glad to be there. But if I had to quibble with something— this is a review, after all—I’d say Char might just provide service to a fault.

As Tang has said many times himself, the whole Korean concept is touch, feel and being part of an environment; when cooking and grilling at their own tables, diners become part of the whole experience.

Only that’s not exactly what’s happening here. Rather than providing guests with the traditional DIY format you’d find at most Korean BBQ restaurants, Char’s servers bring the meat to your table and cook it for you. Their argument: It’s a higher level of service. Mine: Having your server stand over your table for several minutes can feel a bit intrusive, often disrupting your meal and conversation. Likewise, the servers don’t always cook the meat to your liking. Mine was often overcooked. But mostly I missed the interactive element that comes from cooking myself. That’s half the fun of Korean BBQ in the first place. 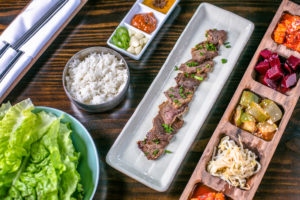 Admittedly, that wasn’t the only flaw I found with Char’s barbecue. While delicious, the grilled meats—go for the tender and flavorful marinated kalbi short rib and dwejibulgogi (spicy pork butt)—are, quite frankly, overpriced. Prices range from $11 to $14 per order, but only include three ounces of meat. For all the accountants scoring at home, that’s roughly $70 per pound. And, while the quality of the meat is arguably higher than its Buford Highway counterparts, this isn’t exactly A5 Wagyu, or even organic, pasture-raised beef, we’re talking about. The shrimp was perhaps most egregious—three medium-sized shrimp for a whopping $14. Neighboring MF Sushi, one of the priciest seafood restaurants in town, doesn’t even charge that much.

Likewise, if you’re familiar with the complimentary banchan (pickled vegetable side dishes) that arrive at most Korean restaurants with the grilled course, brace yourself, as Char charges extra for theirs. They do, however include kimchi and rice at no extra charge.

Still, you need to go to Char. It’s a welcome and much-needed addition to intown dining that’s turning out some delicious plates. In fact, Chef de Cuisine Shaun Byun’s composed dishes are pretty spectacular, running the gamut from traditional bibimbap (one of the best versions I’ve had, thanks to the addition of seasonal veggies and a perfectly cooked egg) and pajeon (scallion pancakes; these are not to be missed) to modernized East Asian fusion dishes. Go for the ribeye tartare, sweetened with Korean pear, topped with a quail egg and served with crispy wonton chips. 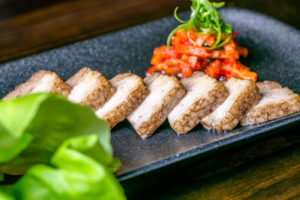 After eating a dozen different plates, I found Byun’s cooking to shine brightest when he sticks to the classics. His Korean fried chicken is crispy yet juicy, with an addicting sticky glaze. The bossam, easily my favorite thing on the menu, was bursting with flavor and a lesson in contrast: Pork so tender you could cut it with a spoon is offset with sweet and tangy pickled vegetables and cold, crisp lettuce wraps.

On the other hand, some of his new-age plates flopped. I was intrigued by the “cheese corn” appetizer, having heard this decadent dish is common at Korean BBQ spots. In theory, I get the appeal—it’s essentially a super rich macaroni and cheese where corn is swapped in for pasta. But in practice, I found Char’s cheese corn to be over the top— it’s literally made with Velveeta (not exactly the kind of high-quality ingredient I’d expect to find at a chef-driven restaurant)— and in desperate need of balance. Some acid or bright herbs or gochujang (Korean chile paste) folded in would’ve made this plate sing. 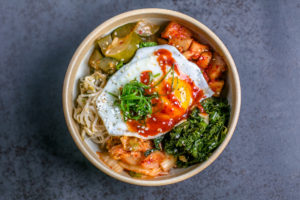 Bibimbap is packed with seasonal veggies and topped with a cooked egg.

Tang has been quoted in media outlets all over town about how his goal with Char is to be a neighborhood restaurant serving authentic Korean barbecue that doesn’t take itself too seriously. But while his restaurant is refreshingly unpretentious, some of the playful elements just miss the mark for me. Take the dessert menu, for instance. You’ve got freeze-dried ice cream, a molten chocolate lava cake (in case you didn’t get your fix at Chili’s) and, most offensive of all, a fried Twinkie plate that would be more at home at a state fair than in a Korean restaurant. It just didn’t fit.

Fortunately, the stellar beer list and craft cocktail menu make up for it. You can’t go wrong with the Shiso Mule. The blend of Asian ingredients (roasted rice soda, Korean plum shrub and sesame-infused bourbon) found in the classic cocktails fits the space and vibe perfectly; every one I tried was approachable and delicious. Everything you’d want in a neighborhood restaurant.

Bottom Line: Char is a welcome and much-needed addition to intown dining that’s turning out some truly delicious plates despite hefty price tags and heavy-handed service.