If you meet Kendra Rainey and Mason Poe at their Westside office, you might just find yourself befriending a few llamas and chickens on the way in.

Rainey and Poe are the founders of Edgar Allan, a brand strategy and web design agency in Atlanta’s Goat Farm Arts Center. The ramshackle collection of red brick industrial buildings dates from the 1880s and is home to an eclectic assemblage of artists, musicians and, yes, farm animals. It’s the perfect setting for a back-to-basics creative team who believes that success lies in learning from the past.

The company was born in 2013, alongside the founders’ children. “We both had babies on the same day at the same hospital,” Rainey says. “He saw my name on the board and thought, ‘I know her!’” They’d crossed paths professionally over the years, and a few months into parenthood, Poe approached Rainey about joining forces.

The name “Edgar Allan” has a double meaning. “One of our main goals is to think about how we could approach the world more like an author rather than as a technician,” says Poe. “The other part was people have often asked if I was related to Edgar [Allan Poe], so now I can say I am … at least through the company.”

Both believe that taking smaller steps with built-in learning stops is the way to better customer connection for their clients. Edgar Allan’s roster includes major enterprises such as the Cartoon Network, The Weather Channel and Coca-Cola, as well as start-ups.

Traditional industry thinking, Poe says, “is that you make something, spend a whole ton on advertising and hope that at the very end of the funnel you start to see sales. What we’re asking is, how can we do something that’s more direct and put something out there that we can learn from —”

“And then take the learning back and make it better. And do that multiple times,” says Rainey.

“Instead of launching a whole app, launch with just a landing page that has one or two simple ideas and see how people react to those,” Poe explains, “And incrementally roll out the story.” 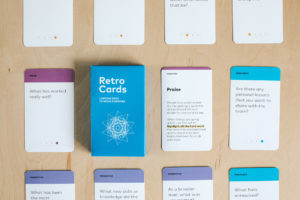 A pack of Retro Cards, which Poe and Rainey created as a tool to help assess the effectiveness of projects

It was this process of “small learnings” that inspired them to create their own product: a pack of brightly colored flashcards they call “Retro Cards.”

The idea is that rather than waiting until the end of a project to conduct a single, typically amorphous “post-mortem,” add targeted confabs along the way. They decided to call each look-back a “retrospective” because “‘post-mortem’ feels pretty dark and scary,” says Poe. And no need to be all formal about it. Relaxed, open conversation is the goal.

The pack is comprised of 34 questions divided into nine individually colored categories. The purple section focuses on perspective. The directions read: “It’s easy to get myopic and view a project through the lens of your own efforts. You could blame this on the little screens we stare at all day, but it’s probably mostly because we’re pretty much bags of skin filled up with ego. Use this set to help everyone look at the bigger picture.”

They started using the cards with clients and internally, sometimes in walking meetings around the farm or to get coffee. (“There’s so much good coffee over here,” Rainey notes enthusiastically. That and the many top notch restaurants are part of the reason they chose their Westside location.)

In December 2017, they launched the cards online. They are already on the third printing.

“I think my biggest learning is that you can pretty much retro anything,” says Rainey. “The cards systematize learning from past experiences. So they’re not just for creative work or digital products. We’ve had clients retro their own projects in their own industries. And I’d totally retro my next family vacation after the fact.”