Gone are the days when a beer was just a beer. The rise of craft breweries has made us realize that the sudsy beverage is worth caring about. And no longer is wine the only drink worthy of expertise; more often, diners look to pair their meals with the right brew. Wine drinkers have sommeliers to help with food pairings, and now beer enthusiasts can turn to the cicerone.

A cicerone is a certified beer expert who’s passed a rigorous course of study and examinations. About 2,700 cicerones have earned the honor around the whole world, and 41 of them are here in Georgia. Of those 41, only six are women. Atlanta is lucky enough to have a cicerone of its own in Brandy Ramsey, the beverage manager at Two Urban Licks (TUL).

As bubbly as beer itself, Ramsey is passionate about her niche and is happy to indulge those eager to learn about it. The Concentrics Restaurant Group veteran had been with the company for about five years before realizing she needed to be a cicerone. As the general manager at Tap, she called on industry insiders to talk to her staff about the beer brewing process and different styles, and she wondered why she wasn’t the one educating her team. Reflecting on that moment, Ramsey says, “I thought, ‘I should be able to talk to them about this. I should be the one who teaches them all these things without having to call people in.’”

Ramsey and a co-worker dove into the program head first, studying and sipping their way through a year-long program in just 18 weeks. This type of stamina wasn’t something that everyone in the program had. “On the first day of class, there were maybe 50 people, but by the time we took our exam, there were maybe 15.”

Ramsey now oversees the beverage program, including cocktails and wine, at Two Urban Licks. She doesn’t fancy herself a mixologist, but being a cicerone has made her more aware of flavor profiles, knowledge that helps her concoct seasonal tipples. Beer is still her baby, though, and she started nurturing the beer program the second she stepped through TUL’s doors. This meant swapping out TUL’s four draft beers with local pours, rotating among Atlanta’s breweries to “show love.” She also let her snob flag fly when she lobbied for a new beer cooler that allows for more even chilling and tripling the restaurant’s bottled beer list.

Her college days of drinking any beer are long gone, and while she now has a finer appreciation, she’ll never be one of those people who sends a beer back. Her philosophy is simple: “Just drink it; it’s beer! You can order another one.”

Dining at Two Urban Licks? Here are a few of Ramsey’s favorite pairings: 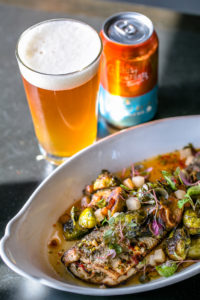 For a sophisticated fish like the branzino, served alongside Brussels sprouts and pears, go for the beer with a cult following. The fruity flavors in Tropicalia play nicely with the fruit in the dish.

PRO TIP: TUL gets such a limited amount of Tropicalia that it’s not even on the menu, so be sure to ask for it if you want it. 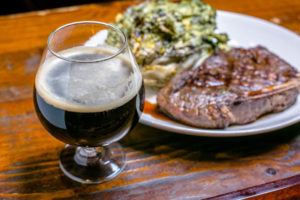 The meat is smoky, served with escarole and toasted hazelnuts, and the beer is mild, making for a great pairing. Ramsey adds, “The way the malts are roasted, you get a nice nuttiness, which I thought would go really well with the hazelnuts.” 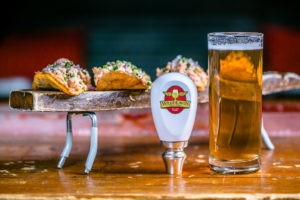 Emergency Drinking Beer is a pilsner-and-gose hybrid with Portuguese salt and lemon zest that goes great with the salinity of the fish. “Pilsners are really good palate cleansers; the carbonation and hops cut through food to get you ready for every bite,” explains Ramsey.