One of Atlanta’s hottest new restaurants is leading by example

Atlanta may not be a European city, but did you know we have our very own castle? Across from the High Museum on 15th Street, you’ll find “the Castle,” a historic landmark built in the early 1900s by Ferdinand McMillan. This castle has women in it, but, unlike the fairytales of yore, they aren’t damsels in distress— they’re bosses running the show. The new Midtown restaurant Rose+Rye isn’t just setting an example with its leadership team; it’s also one of Atlanta’s hottest dining destinations. 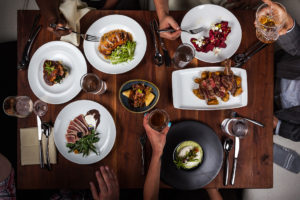 An impressive and eclectic spread from Rose + Rye’s menu

The team is comprised of Lindsay Owens, executive chef; Jessica Shilling, general manager; Seewai Sayavong, assistant general manager; Anu Adebara, sous chef; and Charity Everett, pastry chef. None of them knew each other before working at Rose+ Rye, and bringing the talents of these women together happened organically. “Creator Thaddeus Keefe was looking for talented and driven people to come onboard, and the best candidates he considered happened to be women,” says Owens. While an all-woman team was never the intention, it’s still a point of pride for the team. Owens explains, “We’re proud of that distinction and hope to set an example for other restaurants to be more open to hiring a female team.”

In the 1940s, the house was bought by Hazel Butler Roy, who opened it to artists. Owens pays homage to the Castle’s artistic heritage by presenting her dishes in artful and creative ways. Of her cooking style, Owens says, “I’ve lived all around the country, from Minneapolis to Texas, and I like to fuse those cultures and use what I’ve learned to create flavorful dishes. My fine dining experience encourages me to revamp some of my favorite things to eat.” Standouts on the menu include chicken mole with a crispy rice cake and wilted kale, and a beet salad that artistically presents the beets as rose petals with sage buttermilk cheese, made with local Banner Butter, and garlic oil. The artistry continues on the dessert menu where Everett surprises diners’ taste buds with a balsamic glaze and fig jam on panna cotta.

Adding to the restaurant’s charm is the downstairs bar, the Grotto. Rocks line the wall behind the bar from floor to ceiling, making for a dramatic, earthy setting. Make time to stroll onto one of the outdoor patios and drink in views of Midtown Atlanta along with your cocktail.