We’ve followed rumors of ghosts at some of the city’s haunted bars to forge a spooky spirit-chasing, bar-hopping tour

We’ve all got our favorite haunts around Atlanta— places we go to grab a beer or a go-to spirit. But in a city rife with old homes and history, some of these “haunts” take on a more literal meaning. With the season of spooks upon us, we invite you to take a tour of bars in which the spirits are not just of the liquid variety—if you dare.

The Highland Inn & Ballroom Lounge is popular for its eerie reputation. The hallways alone conjure images of haunted halls in The Shining. Bar Manager Robert Harvey says he’s had a personal encounter. He recalls that he’d just turned down the music in the room to little more than a whisper, then he crossed the room to turn off the lights. As he reached for the switch, the music began blaring. “It was creepy for me because I was the only one on premises at the time,” he says.

Torched Hop Brewing Company is frequented by the inexplicable sound of a bell, like an antique phone, faintly ringing and girls giggling. Co-owner Stephen Bivins says multiple employees have heard the sound of two young girls when no one else is in the building, and on each occasion the employees say it sounds “like two girls were playing behind the attic door.” Other accounts tell of a woman in a 1920s-era dress floating between the bathrooms, and it’s said that her appearance has a nearly transparent quality.

The building that is now Inman Park’s Parish: The Brasserie and Neighborhood Cafe was once part of the General Pipe Fitting and Foundry, a business that dated back to the 1890s (in fact, famed Atlantan Robert Woodruff worked there as an apprentice when he was 19). Now it’s possible that former employees of the piping era still have not moved on. General Manager John Mc- Daniels says that the upstairs dining room, which was formerly the piping business office, has often been the site of paranormal happenings, often during business hours. Glasses are known to mysteriously fly from tables and shatter on the floor. “Not in an ‘Oh, I missed the table and it fell’ way,” he says, “but more like someone or something was walking through the dining room and just pushing them off the tables with an unseen force.” Grab a drink upstairs, but just be sure to hold onto your glass! 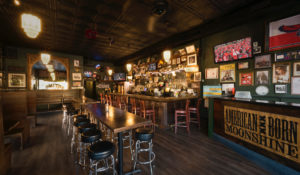 Wrecking Bar Brewpub also seems to be haunted by a family of ghosts. General Manager and Partner Stevenson Rosslow says he’s heard no fewer than six accounts of two small children and an unidentifiable adult haunting the space. Previous owners also told Rosslow that the ghosts were prone to rearranging. “There was a figurine on the downstairs second bedroom mantle that would be found on the floor each morning,” Rosslow says. “Each day they would replace it on the mantle. The following morning it would again be found on the floor.”

Smith’s Olde Bar is home to a ghoulish man who appears at the top of the stairs wearing a dark hat. Those who have seen him describe feeling a gust of cold air coming up the stairwell; some even say the ghost is accompanied by the sound of hysterical crying. Manager Brittany Burdett says there are two running theories as to who the man may be, “In the early 1900s, Smith’s housed meetings for a local Mason chapter. One of the members hanged himself after it was discovered that his wife was having an affair with his brother,” she says. “It could also be Wilfred, one of the long-time regulars of the cabaret Gene & Gabe’s, who vowed to the bartender each time he left ‘to be back with a vengeance’ the next evening.” As all good ghost chasers know, when it comes to paranormal activity, seeing is believing. If you’re feeling brave (or you’re seeking a good fright), come witness the spirits that inhabit these spooky bars for yourself.

Theater To Make You Think