Whenever people ask me what part of Atlanta I live in, and I tell them Decatur, they always say, “Oh, I love Decatur.” And then they proceed to ask me for my recommendations for favorite restaurants, activities and attractions. I’m happy to oblige because the ITP suburb an Atlanta Journal- Constitution writer once deemed “where Mayberry meets Berkeley” is ripe for a day, or better yet, a weekend of exploration.

One of the main draws of Decatur it its walkable downtown. There’s so much to see and do, you don’t even have to leave its cozy confines. Smack in the middle is the DeKalb History Center, the 19th-century former courthouse turned museum that offers visitors a crash course on the city’s rich history, including that it was founded almost a quarter of a century before Atlanta itself. Head a block or two in almost any direction, and you’ll be presented with bountiful options for dining, drinking, shopping and more. 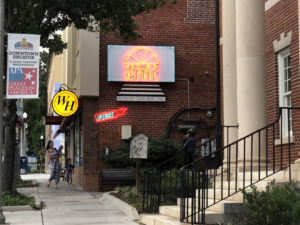 Eddie’s Attic is an institution for live music.

Some of my favorite eateries include Taqueria del Sol, where the line out the door indicates just how much diners enjoy the brisket tacos, jalapeño coleslaw and other Southwestern slash Mexican specialties; Big Tex, where the plates are heaped with down-home staples such as chicken fried steak, catfish and meatloaf; and Café Alsace, a hidden gem serving Alsatian fare that’s as delicious as the room is intimate (there can’t be more than 12 tables). Two of Atlanta’s best-known chefs have restaurants in Decatur that you’ll want to put on your must-try list. No. 246 is an Italian trattoria from Ford Fry noted for its pastas, pizzas and spirited ping pong matches on the table out back when the weather’s fair. At Revival, former Top Chef contestant and Gunshow guru Kevin Gillespie presents a menu of Southern-inspired, family style meals, as well as horseshoes and cornhole in the convivial beer garden back behind the main dining room.

When your outing calls for cocktails, grab a stool at the bar at The Pinewood for innovative drinks and liquor flights. For a sweet treat, head to Butter & Cream for scoops of small-batch ice cream in flavors such as butterscotch brownie and bourbon coffee chip. 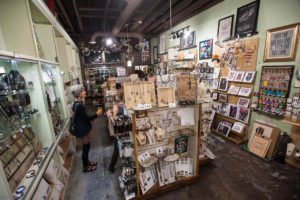 At HomeGrown, take your pick among ceramics, jewelry and gift-worthy goods.

Between bites and sips, stroll the numerous downtown shops. I’m partial to HomeGrown for its selection of handcrafted jewelry, pottery, artworks and gifts with a regional slant—not to mention the kitschy shrine to Mr. T in the back corner. The Little Shop of Stories is an independent children’s bookstore that appeals to kids small and tall. Decatur CD is one of the few stores in Atlanta that still stocks vinyl records.

Speaking of music, venerable venue Eddie’s Attic is a great place to take in a show. Founded in 1992, it’s been the launching pad for acts such as John Mayer, Indigo Girls and Justin Bieber. The Java Monkey coffeehouse has a small outdoor stage and features either live tunes or an open mic almost every evening.

History buffs should make time for a visit to the Decatur Cemetery. One of the oldest in Georgia, it predates Oakland Cemetery by almost three decades and has more than 20,000 graves, including a section dedicated to Civil War veterans. 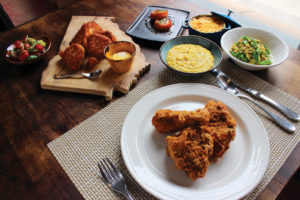 Southern inspired fare is the star at Kevin Gillespie’s Revival.

If you decide to overnight downtown— and you should if you’re there during one of the dozens of festivals held each year, be it the popular AJC Decatur Book Festival or the Decatur Arts Festival—a good hotel option is the Courtyard Atlanta Decatur Downtown/ Emory that boasts an indoor pool, fitness center and an excellent ramen restaurant called Taiyo.

There’s more to Decatur than the bustling downtown area, including the little-known Waffle House Museum located on the site of the first Waffle House diner, but downtown is certainly where you’ll get the most bang for your buck, whether you’re a family taking in one of the free concerts on the square, youngsters out for a night on the town or foodies looking for your new favorite restaurant.

A Cause For Celebration