Cocktails get a kosher twist courtesy of a local connoisseur

You may have heard about kosher hot dogs and know some of the more common practices (for example, no eating meat with milk at the same time), but have you hear of kosher cocktails?

Rosh Hashanah, the Jewish New Year, is September 20, a day when Jews gather together for a fresh start as the lunar year rolls over. Beyond prayer-filled services, it’s a holiday that’s rich in symbolism and traditions, many of which are food-related, calling for dinners and, consequently, adult beverages.

To get into the spirit of these festivities, we chatted with Robbie Medwed, a local Jewish gay rights activist who developed an interest in kosher cocktails.

“The more I started getting creative, the more I realized how many liquors and spirits weren’t kosher,” he says. “Some had animal derivatives that wouldn’t be okay, or some flavorings or additives that weren’t kosher. I wanted to make sure everyone could enjoy the cocktails at holiday meals no matter their observance level, so I started to do some research and began writing recipes that relied on kosher spirits.” Medwed’s hobby turned into something more serious, and now he’s working on a kosher cocktail recipe book to bring Jewish holiday-centric cocktails to home bartenders everywhere.

For the uninitiated, kosher means “fit” or “proper” food that is up to the standards set forth by Jewish dietary law. What makes a cocktail kosher? Medwed says, “Typically, for distilled spirits to be kosher, they have to either be certified by an agency that oversees its production to make sure nothing with prohibited ingredients (such as carmine, which comes from beetles) is added to the spirits. Or, they’re a distilled grain or legume (wheat, barley, corn, etc.), and no additives or flavorings are added after distillation.” One spirit he’s pretty high on is Richland Rum, based just two hours south of Midtown. Not only is Richland local, but it’s the only single-estate rum to be certified kosher.

You don’t have to be an observant Jew to enjoy a kosher cocktail. Seasonal ingredients Medwed recommends using in the fall include apples and honey, playing off the Rosh Hashanah symbolism. To get a taste of holiday themed tipples, mix one of Medwed’s recipes up at home.

Medwed says, “Stone fruit comes into its own at the end of summer and the beginning of fall, and the smoky mezcal gives warmth that’s ideal for the season. 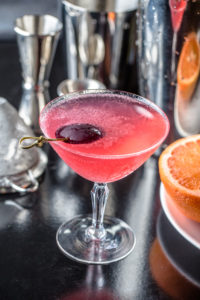 To make the plum syrup, combine chopped black plums with equal parts sugar and water. Boil it down until the fruit starts to fall apart and the syrup turns a bright purple. Cool and strain.

Combine mezcal, plum syrup and grapefruit juice in a cocktail shaker with ice and shake well. Double strain into a coupe or other stemmed glass and top with soda water. 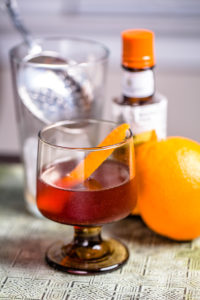 “This drink is fall in a glass. Any decent dark rum will do, but you’ll want to go with a nicer amaro. I’m partial to Bruto Americano, Ramazzotti or High Wire Distilling’s Southern Amaro, which is made in Charleston, S.C.”

Combine the first four ingredients in a pint glass with ice and stir gently until the sides of the glass frost. Strain and pour into a stemmed glass. Finish with a squeeze of orange peel over the top. 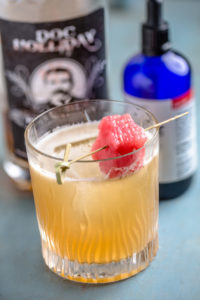 “I love the edge of seasons, when you get to mix the last produce of one season and the first of the next. That’s how this cocktail was born. I take overripe watermelon and soak it in overproof rum (or vodka) for a few days to draw out the flavor. That liquid, once strained, is a great liqueur that’s perfect for mixing with other ingredients and tastes like summer while the maple syrup opens the door to fall.”

In a cocktail shaker combine the whiskey, watermelon liqueur, maple syrup, lime juice and hibiscus bitters with ice and shake well. Double strain and pour over ice into a rocks glass.