“Should we sit next to each other?” my husband asked as we strolled toward a vacant booth inside Green Sprout Vegetarian Cuisine. 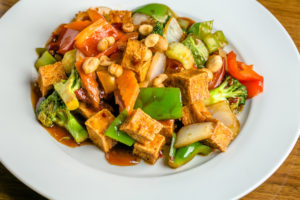 It seemed an odd question: We always sit facing one another.

Then I looked around the dining room. Only two other tables were occupied, both booths, and at both couples were sitting side by side.

“We’re rebels,” I said, slipping into my own seat.

Green Sprout Vegetarian Cuisine is located in a strip mall across from Ansley Square. The dining room is dimly lit, which helps set a relaxed mood yet not necessarily a romantic one. There’s a comfortable casualness here, like the difference between a long-term relationship and a first date.

Shortly after we were seated, a fourth couple entered and sat at yet another booth, side by side. “We’re going to share an order of Mongolian soy beef,” one half of that couple told the server—words that immediately answered one question while raising another. 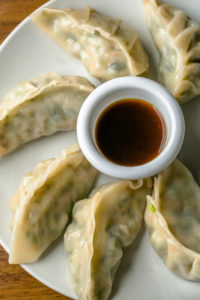 Steamed dumplings are accompanied by a flavorful dipping sauce.

That explained the seating arrangements we’d observed. Yes, eating off the same plate is one way to share food, and if that’s your preferred method, you may want to snag a booth and sit adjacent to your dining companion. We simply asked for extra plates, preferring not to crane our necks to look at one another. We ordered five different menu items on that visit, along with extra plates, all of which were delivered with a smile, as were the to-go boxes when we couldn’t finish but didn’t want to let a morsel go to waste.

Beef? The restaurant is 100 percent vegan, a fact that isn’t quite clear from the restaurant name. Nor does it reveal that it is rooted in Chinese cuisine. While most dishes are described as vegetable- or tofu-based, a closer inspection of the menu revealed that soy versions of beef, chicken, pork, shrimp and salmon are available in some dishes as well as add-on options.

Alternate meats may satisfy cravings for a former-omnivore vegan and can make the restaurant more enticing to an ardent carnivore. My meat-loving mom reluctantly joined me on my second visit and was quickly won over. 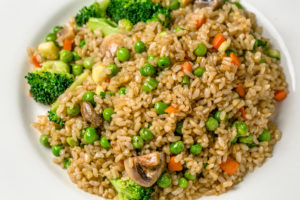 Vegetable fried rice stands on its own or pairs well with other dishes.

Empire Soy Chicken, the restaurant’s most popular dish, impresses. I’d not previously had imitation chicken, but this version is so good, if you didn’t know it wasn’t real odds are you wouldn’t suspect a thing. Here, deep-fried little balls of the stuff arrive nestled in with vegetables swimming in a thick, sweet-spicy sauce. I sliced one bite-sized faux-poultry nugget into two pieces with a fork, picked it up for inspection, and my jaw dropped: It looks like chicken, not tofu. It has chicken’s toothsome texture, tighter and firmer than even extra-firm tofu. I didn’t try any other imitation meats, but the soy chicken blew me away with its authenticity.

I later learned from manager Chi Fu that the current two-page menu presents the most popular dishes from the previous four-page menu. The restaurant, which originally opened in 2003, has a loyal following. It’s easy to figure out why: Each dish we sampled has an eye-pleasing presentation, well-balanced flavors and fresh ingredients. 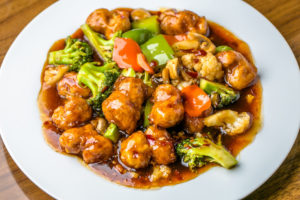 Empire soy chicken is a believable stand-in for the real thing.

Steamed dumplings, like most dishes we tried, pack a strong flavor with notes of broccoli and other veggies. Tender and warm, they melt in the mouth. Fried curry spring rolls, a spicier appetizer option, are stuffed with potato and fried to golden perfection; the spicy heat lingers in the puddle of red-orange sauce served alongside. The sauce is so tasty it’s tempting to pick up the little bowl to drink it once the rolls are gone.

Butternut squash with plum sauce is arguably the most beautiful dish with its snappy color contrasts. It also stands out on the menu as the dish most proud to be 100 vegan; there’s no normally-has-meat-in-it counterpart it’s trying to imitate. Steamed squash arrives topped with broccoli stalks, purple cabbage, snow peas, zucchini and thin, crunchy slices of lotus root, all smothered in a rich-hued sauce. 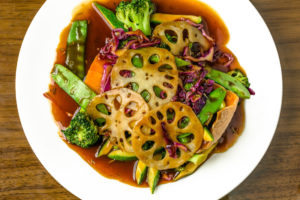 Kung Pao tofu and General Tso’s tofu both feature crispy fried tofu and equivalent levels of spice—so similar, in fact, that even side by side it was difficult to tell the two dishes apart beyond their vegetable mixes. (In addition to tofu, both dishes have broccoli and bell pepper; the Kung Pao also has carrot, celery and peanuts.) Each sauce enhanced the vegetables, but the two were essentially indistinguishable. Both recipes are tasty, but if it’s variety you crave, then order one or the other rather than both.

Whatever else you order, don’t miss the vegetable fried rice. Though it could make for a satisfying meal on its own, it also pairs perfectly with other dishes. It’s packed with broccoli, carrot, mushrooms, green peas, zucchini and string beans.

Each time I’ve visited Green Sprout, I’ve ordered more than I actually need to eat, eaten more than I intended and left toting leftovers to devour later. I walk to my car feeling full yet not bloated—which makes it easier to imagine comfortably cuddling up to my husband once back at home. 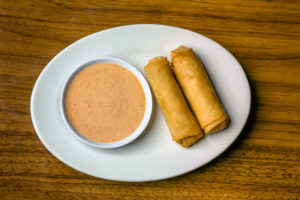 Bottom Line: 100 percent vegan Chinese-style fare priced right. Appetizers, entrées and chef specials are on the menu. The atmosphere is casual, service fast and flavors well balanced. Dine in or pick up phone orders to go.

Inside Scoop from Manager Chi Fu 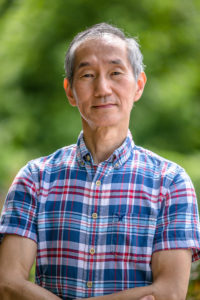 Who owns the restaurant?

My brother is the owner; he opened it in 2003. I moved here six years ago to help him; he’s getting ready to retire.

What’s the most popular dish on the menu?

Empire soy chicken. But everything is popular: The menu was four pages and is now two; anything not popular is gone.

How often does the menu change?

About once a year.

What’s your personal favorite dish on the menu?