Atlanta has no shortage of food festivals, but only one is dedicated to the iconic summer vegetable (er, fruit): the tomato. The Attack of the Killer Tomato Festival (AKTF) celebrates its 10th anniversary on July 15 by returning to its original home at the Westside Provisions District. This quintessential summer fête is a benefit for Georgia Organics, a nonprofit that connects Georgia’s farms to families. The July air is always hot and sticky, but chefs flex their creative muscles and whip up unique tomato dishes that most of us would never dream of—tomato cheesecake, anyone? Free-flowing cocktails and a live band round out the festival atmosphere. This year’s performer is G. Love & Special Sauce. 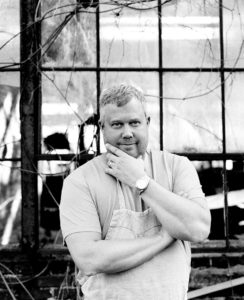 We chatted with Ford Fry, owner of Ford Fry Restaurants and the creator of the AKTF, to learn more about the festival as it approaches its milestone anniversary.

How did you come up with ATKF?

It was our second summer at JCT. Kitchen, and I remember Nicolas [Donck] of Crystal Organic Farm would come to our door with stacks and stacks of tomatoes. He said, “I can’t give them away,” and even we had them all over our menu. I thought it’d be really fun if we did an event where all the top chefs of the city come and do tomato tastings, so we did it the following year. All the farms sold out of their tomatoes. I also wanted to have a super-casual festival that celebrates the farmers.

That was early [in the movement], but there were chefs in the city who were ahead of the game. Annie [Quatrano, of Bacchanalia and Star Provisions] for me was one of the biggest players. She’s always been cooking like that, so it was normal for her. How do the recent festivals compare to the first one? For the most part, it gets bigger with more interesting tomato tastings. Chefs come for their first year, and they’re not sure what to do, and they play it safe. Then they see everyone else doing crazy things, and they bring it the next year.

How hard was it to get chefs on board for a collaborative event?

It was easier back then. It’s getting harder now because chefs are pulled in so many directions. A few chefs opt out because it’s too much volume. But there is a waiting list of chefs hoping to participate.

What sets ATKF apart from other food events in Atlanta?

It’s super-casual. I would say every “healthy” restaurant in Atlanta has a holiday party for its staff. Farmers don’t get that; they’re working every day, whether they’re growing, picking or delivering. No one’s throwing them a party. So my take is that this is a party for the farmers. It’s not for the chefs or the community; it’s to celebrate the farmers.

What are some particularly memorable tomato dishes from past festivals?

[Executive Chef] Brian Horn did one for JCT. Kitchen that I still remember to this day. It was a warm jelly doughnut with a bacon fat mayonnaise, and something about it all came together. The brioche doughnut was filled with tomato jam, and it was so yummy.

Ticket pricing for the Attack of the Killer Tomato Festival begins at $65; killertomatofest.com.

Get in the spirit of tomato season with this recipe provided by Drew Belline, culinary director of the Optimist on the Westside. Simple yet delicious, roasting the tomatoes brings out their natural sweetness.

Pre-heat oven to 285 degrees. Arrange tomato slices in a single layer on a baking sheet and toss in 1 tablespoon of olive oil. Roast for 3-4 hours. Check to make sure they’re not roasting too quickly; if so, lower the heat. They should be slightly caramelized when finished.

Smear a generous amount of goat cheese on a slice of the toasted bread. Arrange tomatoes on top and garnish with a torn basil leaf, drizzle of olive oil, twist of fresh cracked black pepper and a pinch of sea salt.

Leftover tomatoes can be preserved in olive oil, used as an accompaniment to fish or pureed into a sauce to add complexity, acid and richness.