Nurture your knack for film making at the Atlanta Film Society

If you’ve got your sight set on Y’allywood (the Georgia film industry made a $9.5 billion economic impact on the area in 2017), look no further than the Atlanta Film Society to build the robust set of skills you’ll need to make it in the entertainment and media business. The organization dates back to 1976, making it one of the oldest and largest organizations dedicated to the promotion and study of film in the United States. It’s also the current host of the award-winning Atlanta Film Festival.

For those new to the film business, the Atlanta Film Society offers a threeclass series to get you started: “Intro to Film Business,” “Getting Started in The Industry” and “Resumes for Film and TV.” To complement that series, “Intro to Contracts” offers a glimpse into the legalities of a solid contract, including protecting your work and getting paid.

The courses are numbered to convey their levels of difficulty and are easily accessible for film enthusiasts and those already in the industry. Most classes are held at the DeKalb Convention & Visitors Bureau and other locations in-town; they can be booked online. They’re offered weekly with costs ranging from $40 to $65 per class. If you qualify, the DeKalb Entertainment Commission could sponsor you with a $20 discount. 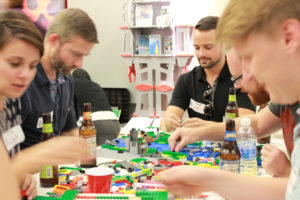 The technology industry is growing at a fast pace in Atlanta, and as the industry grows, so does the number of tech job opportunities. A good way to add a few tech skills to your resume is through the Museum of Design’s workshops in robotics and 3D printing. The Lego robotics workshop, available for team building events and private groups, teaches participants the basics behind building a robot with Lego blocks and sensors, and bringing them to life. Stretch your engineering skills and start thinking like a programmer while using coding basics to get the robots moving.

The classes, held downtown, can be booked directly online through MODA’s site. Keep an eye out for MODA’s recurring Lego + Local Brew events, a fun get-together with friends as you try new skills and brews.

If your creativity veers more toward design, MODA innovation educator Brigid Drozda teaches an introduction to 3D printing that encourages design and critical thinking, experimental learning and project management. The course invites adults to design custom candle holders using a browser-based 3D modeling program called Tinkercad. Create a 3D model of your candleholder and, just a week later, pick it up after it’s been printed. The next class is September 23; to register, visit MODA’s website.