Mark Edge began designing jewelry 30 years ago, when he was in the eighth grade. The silver smithing class he took at that time would be the only official jewelry-making education he would ever have, and he’s not shy about saying that his creations were the best out of all the students’ designs. At 15 years old, his silver and stone jewelry landed in boutiques in his native Birmingham, Alabama. “My mom had to drive me to deliver the jewelry and also to pick up my checks,” he says.

After taking a break from jewelry making and graduating with a marketing degree from the University of Alabama, Edge decided to get back into the jewelry business. “It was fun and interesting, and I have the gift, basically,” he unabashedly admits. Edge moved to Atlanta in 1988 to be near AmericasMart, where he meets and sells to retailers. “Because I was a designer, I thought it would be wise to be near it. It’s kind of a big deal. It’s the most important market regionally.” 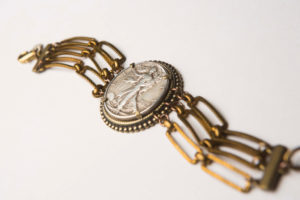 A bracelet featuring a Walking Liberty half dollar coin retails for $218.

Despite having hands that felt like sandpaper from soldering and polishing, he continued to create his signature silver jewelry. Shortly after 9/11, his simple silver-and-turquoise cross necklace on a brown leather cord “went viral” by way of newspaper.

The AJC fashion section included it in a jewelry roundup, and then it was syndicated in newspapers all over the country. “People were in mourning, and there was all of this spirituality going on,” says Edge. “There were waves of orders—one week, the cross was featured in Los Angeles, and then Seattle the next. We sold about 800.”

After almost 10 years of designing his contemporary silver collection, an idea for a new line sparked while Edge was renovating his 1909 Craftsman home in Midtown. The 4,400-squarefoot abode was originally owned by Governor William J. Northen and his family for about 100 years and featured dark wood, brass doorknobs and all sorts of “vintage-y, antique-y things,” as Edge calls them. “Halfway through the project, which took about a year, it just hit me that I should do to the jewelry what I was doing to the house. By the time the renovation was complete in July of 2008, I had an eco-vintage house and an EcoVintage jewelry collection!” In fact, the line’s logo was inspired by green and bronze wallpaper found in the dining room. 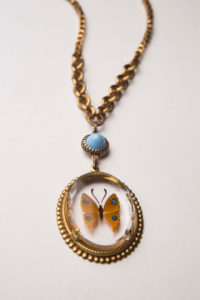 All the necklaces, earrings and bracelets in the line incorporate vintage and recycled items with history, such as coins, semi-precious stones, chandelier crystals, keys, mixed metals, charms and more. To find his pieces, Edge goes on sourcing trips to places such as Brimfield, Massachusetts, home to one of the largest outdoor antique shows in the country, and Scott Antique Markets in Atlanta, where each month he collects African handmade beads and recycled glass. “I just putz around, looking for what someone has that is kind of cool, and a good supply of it—maybe 50 pieces of whatever I find. I love antiquing anyway. I’m a big art and antique collector. The whole business is almost play!” Edge says.

Edge prides himself on designing conversation pieces that are handmade in Atlanta and notes that he has been doing it since before buying “local” was cool. “All I need are the materials to inspire me,” Edge adds. “I’m going to make it interesting, and my pieces always have opposites in them—they are dressy in a way, casual in a way. For example, maybe there’s something ornate or rough and tarnished, and then a faceted stone makes it a little bit dressy. I look at it as wearable art. There’s got to be some funk in it.”

Today, you can find Edge’s pieces in retailers nationwide, including Peridot on Atlanta’s Westside, and on his website, markedge.com.