Atlanta chef Kevin Rathbun and his wife, Melissa, create their own urban oasis 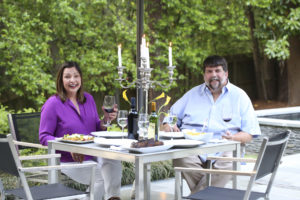 Melissa and Kevin Rathbun love relaxing outdoors in their “own bubble” of serenity.

After living near Spaghetti Junction close to Chamblee- Dunwoody Road just north of Atlanta, Kevin and Melissa Rathbun decided it was time to make the move closer to the heart of the city. Given that Kevin is the executive chef for four of Atlanta’s hottest restaurants—Rathbun’s, Krog Bar and Kevin Rathbun Steak, all in Inman Park, and KR SteakBar in Buckhead—and Melissa works “wherever I’m needed” in the restaurants, the couple wanted a home in town that was close to their work. “Proximity was huge,” he says. 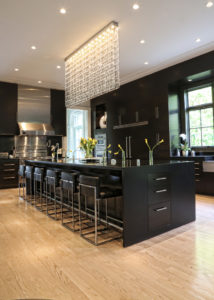 After searching for a while, Kevin finally came across the property he wanted: a one-acre lot in the Morningside- Lenox Park community. He walked the lot, surrounded by well-established trees and shrubs that masked the sounds of city life. “It felt good,” he says, “like I was in the country.” Once the sale closed, the Rathbuns got to work with architect Joel Kelly of Joel Kelly Design in Peachtree Hills and GB Homes, which served as the general contractor. Then the original structure was torn down to make way for their dream home.

Today, the 7,100-square-foot gray brick house is a mix of the Rathbuns’ personal likes: Kevin’s affinity for contemporary and Melissa’s love of New Orleans, her hometown. As a result, the house contains lots of French doors, gas lamps and balconies, along with sleek lines, eclectic light fixtures and a monochromatic color palette. 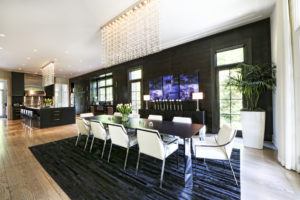 The Rathbuns wanted a large, open kitchen and dining room for entertaining purposes.

The house is constructed on a large scale—wide, spacious rooms with high ceilings and big baseboards—for two reasons. One is for entertaining, and the second is for Kevin. “The scale of the house is a good size for a large man like me,” says Kevin, who is 6 feet, 5 inches tall.

The main level is comprised of a large, sunken living room, expansive kitchen and dining room, and a home office. The second floor contains the bedrooms, while the basement has a wine cellar, home theater and recreation room. The rear of the property holds a 900-square-foot guest house. 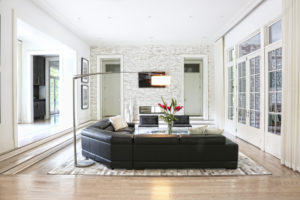 The couple worked with Vic Cochoff of Georgia Cabinet & Supply to outfit the house with many custom, handmade furnishings, such as the zebra wood cabinets in the kitchen and the buffet in the dining room that was styled after one Melissa saw on a trip to Miami.

The 12-foot dining table also was an interesting find for Melissa, who saw it and fell in love with the metal table legs. She wasn’t crazy about the frosted top that came with it, so she had Cochoff construct a custom top. When she spotted the white leather and metal Holly Hunt chairs, she knew she’d found the perfect match to her table. “I had to have these chairs, and I think they complement one another,” Melissa says. 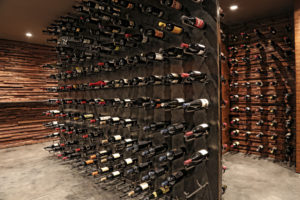 The wine cellar was designed with black walnut to mimic the decor at Kevin Rathbun Steak.

The “gussied up” kitchen, as Melissa calls it, is filled with Viking appliances plus a massive, 14-footlong island. While it may seem a natural fit for an executive chef, it’s actually Melissa who does most of the cooking when the couple is at home. Kevin readily admits that his wife is a great cook, but the real reason she runs the kitchen at home is because she doesn’t want him to mess it up. “I have an eight-burner cooktop, but she won’t let me use the four back burners because it will screw up the stainless steel,” Kevin says.

Melissa is quick to point out that Kevin doesn’t have a restaurant kitchen staff to go behind him and clean up along the way when he’s at home, and she doesn’t want to take on that role. “He has four restaurants; he does not need to mess this kitchen up,” Melissa says. “When he’s at home, I’m like, ‘No, don’t use 42 pans and pots. We can do this with two, I bet.’” 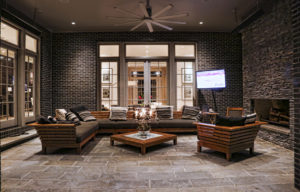 The outdoor living room behind the house serves as Kevin’s man cave.

Instead, she gives him free rein over the outdoor kitchen on the home’s back terrace. “I do all the grilling,” Kevin says, laughing. “I do everything outside. We do not fry bacon in the house. We fry outside.” Of course, that’s OK with Kevin, given the back terrace is his favorite place to be. “That’s definitely Kevin’s man cave,” Melissa says. The space contains several couches, chairs and tables, an outdoor fireplace, mounted TV, the outdoor kitchen and a swimming pool.

Another favorite space is in the basement, where Cochoff constructed the wine cellar inspired by an Architectural Digest feature on one of Jennifer Aniston’s homes. He used black walnut for the walls to mimic the design in Kevin Rathbun Steak. Michael Puzio of Puzio’s Iron Studio did the metal work there as well as the fencing and pergola in the backyard. Opposite the wine cellar, a “cookbook wall” is made of floor-to-ceiling shelves holding a massive cookbook collection. 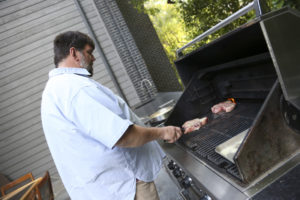 When at home, Kevin does his cooking and grilling in the outdoor kitchen on the back terrace.

Choosing the color palette for the home was an easy choice for the Rathbuns. “We like monochromatic,” Kevin says. “That’s who we are. Grays, the dark woods and the off-whites just worked. That’s what we like.”

However, one selection that challenged the couple was deciding on a floor color for the oak hardwoods. “That was a very hard decision because I didn’t want dark,” Melissa says. “So for this we mixed a gazillion colors together, and we call it gumbo.” The resulting “gumbo” is a milky off-white with very subtle hints of the dark zebra wood of the kitchen cabinets.

It took two and a half years to complete the home, but the couple is thrilled with the results and wouldn’t change a thing—except, possibly, one. Melissa says she would have chosen a different flooring material than oak that would hold up well to heavy traffic, especially high heels. Because the couple does so much entertaining, the floor endures a lot of abuse. “I love my floors, but for maintenance reasons only, I wish I’d gone with something bullet-proof,” Melissa says. 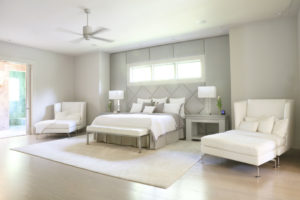 The master bedroom serves as a quiet escape from the Rathbuns’ busy lives.

Otherwise, the Rathbuns love having a place of comfort where they can relax after a hectic day at the restaurants. “When I come home, I don’t even feel like I’m in Atlanta,” Melissa says. “When we’re in the backyard, it is so scenic and relaxing and calming. We’re out of that spotlight, and we’re in our own bubble.”