An Atlanta pathologist trades in his North Buckhead home for an intown, high-rise condo.

After 20 years in his North Buckhead home, Stephen Wells decided it was time for a change. The pathologist had put a lot of work into that house, but, after two decades, he was done with home maintenance and upkeep. He also wanted more than just a new home; he wanted a new lifestyle. “I always wanted to live in a place where I would not have to get in the car [but could] walk to whatever it is that I have to do,” Wells says. “And there are not that many places in Atlanta where that’s realistic.” 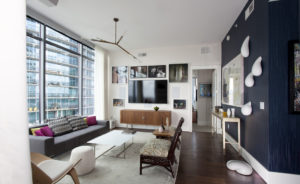 Wells found that lifestyle at 1065 Midtown, a 52 high-rise condominium that occupies the top 11 floors of the Loews Atlanta Hotel building. The residences went on sale in 2015 as the units were under construction; Wells’s home was a model he toured during an open house that summer. In January 2016, he began the process of downsizing from a two story house to his new condo.

“I had some hesitation about making the move because it’s a big change,” Wells says. “But I felt I needed to shake up my life a little bit. And if I was going to make a change, I decided I wanted to make a pretty dramatic one, to have a total change of lifestyle, to go from living in a house to living up in the sky in this condo, and just really give a different rhythm of life a chance.”

The 2,300-square-foot condo includes three bedrooms and three bathrooms with an open layout encompassing a living room, kitchen and dining room. Wells opted to use the third bedroom as a home office. “This is plenty of space for me, and the floor plan worked for what I needed,” Wells says. And, obviously, “The views [of Midtown Atlanta, Stone Mountain and Piedmont Park] were killer,” he adds. 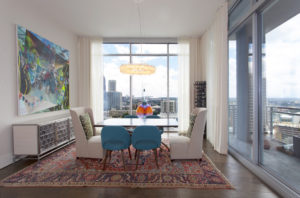 The dining room provides breathtaking views of downtown and Midtown.

One must-have for Wells was finding a home with enough wall space to display his collection of contemporary photography. “That was one of the biggest challenges of changing things up. I have tons and tons of photographs; it’s been a bug of mine for awhile,” he says. “For a condo with windows on three sides, there’s good internal wall space.” Even so, the displayed art is just a portion of Wells’s collection; he loaned out some pieces to friends, and the rest remains in storage.

Since moving in, Wells hasn’t made many changes to the home’s interior other than furnishing it. “The biggest challenge was trying to transition the pieces from a traditional house to what should be a very contemporary feeling place,” he says. With its high ceilings, Brazilian wood floors and stainless steel appliances, the home is quite contemporary, but Wells’s furnishings add quite a bit of warmth to the environment so it doesn’t feel starkly modern. 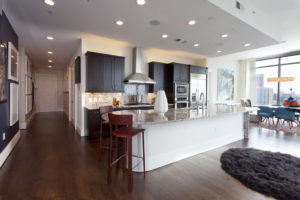 In fact, many of his existing furnishings fit quite nicely in Wells’s new home. For instance, his dining table was built for him about 10 years ago by John Henson of Welborn Henson to fit a small space. Based on a Leonardo da Vinci bridge design, the table features softly rounded edges, layers of wood pressed together and intersecting parabolas for the table legs. It looks perfectly at home in the condo, accompanied by breathtaking city views and a colorful Stephen Rolfe Powell blown-glass sculpture aptly titled “Cheeky Blue Moons,” thanks to its resemblance to a person’s large behind.

Wells worked with interior designer Suzanne Williams to decide what pieces to keep and where to place them, and also to choose elements such as new light fixtures. “I knew I wanted to change the lighting in here, but there is no room above [due to the high ceilings] so you don’t have a million options,” Wells says. He worked with Williams and Steve Leonard at R Hughes at the Atlanta Decorative Arts Center (ADAC) to find some choices he liked. Working together, the trio chose some fixtures to provide ambient lighting, which included pieces by Australian company Christopher Boots in the office, living room and dining room. Wells also replaced the fixture in the guest bedroom with one from R Hughes. 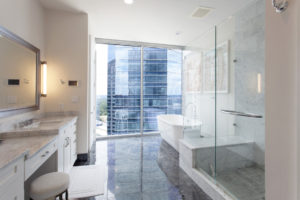 Motorized window blinds provide privacy throughout the condo, including the master bathroom.

In addition, Wells installed motorized blinds on all the windows, both for privacy and to protect his art collection from the effects of daily sunlight, but he kept all the existing window treatments, which consist of sheer curtains in the living room, kitchen, dining room and office, with privacy panels in the bedrooms. He does have plans for the kitchen, which he hopes to turn into a very functional, yet quieter space that doesn’t compete with the artwork on the walls. Currently, the space contains black cabinets, stainless steel appliances, and black and white granite countertops.

He hasn’t decided yet about the wallpapers that were in the model home, but, for now, he likes the gray and slate textured patterns on the walls. 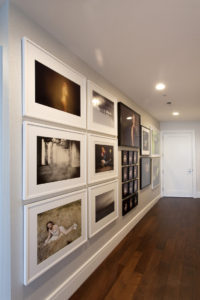 Moving into a home located above a hotel also raised questions for Wells, but those have been answered. “I wasn’t sure about it, but I don’t even know that it’s there,” he says. Homeowners have their own private entrance, parking garage, rooftop pool and clubroom, plus they can take advantage of some of the hotel’s amenities, such as housekeeping, room service and the gym, which is nice, Wells says.

Overall, Wells is satisfied with his new residence and the chance he took to experience a different rhythm of life. “I love the view and the sense that I’m in the middle of the city,” he says. “There’s so much going on, and I can sit here and watch it all happen.”

Wells wasn’t initially sure if choosing an intown high-rise would be a temporary change or evolve into something more permanent, but as he settles in, he is becoming more comfortable. “There were moments when I felt like, ‘Why did I do it?’” he says. “There’s been a transition period of figuring things out, but I don’t regret it. I hope as I go on here I’ll find myself taking even more advantage of what’s around, because that’s why I came here in the first place, to get out in the world and out in the neighborhood.” 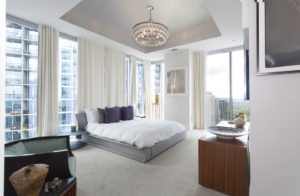 Wells left the master bedroom largely untouched after the purchase. 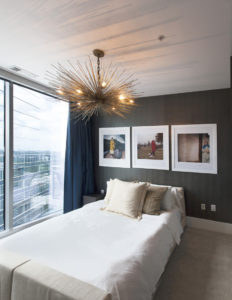