Tim Moxley grew up in Florida, but after graduating from SCAD and the University of Georgia, he’s called Atlanta home since 2000. And he’s grown to love his adopted hometown, so much so that he and two buddies launched an online campaign to connect with others who share the same passion. In 2012, just as Instagram was making a splash, Moxley and partners Brandon Barr and Aaron Coury launched #weloveatl, a site he considers one of the first links dedicated solely to showcasing images of what’s best about the city.

The idea quickly garnered 200 followers, and Moxley and his cofounders decided to move the photos from cyberspace to the real world with a showing at the Young Blood Gallery on N. Highland Avenue.

“We connected with eight people who had posted photos and asked them if they wanted to work on a show,” says Moxley, an advertising photographer by trade. “Three of them responded, and we met, complete strangers, and started having weekly meetings to plan it.” 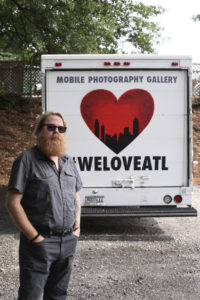 The team curated about 5,000 submitted photos that they whittled down to 275 by 180 photographers. The show drew 1,000 people, raised just over $3,000 for the Atlanta Community Food Bank and inspired more people to post their Atlanta images online. Today, more than 350,000 shots are part of the #weloveatl archive.

But it’s not just about Atlanta,” Moxley says. “I love that we’re making connections with people who live around the city but also the state and the globe. I’ve shared images with other people of their cities, too. It’s a way to get a glimpse into other cultures.”

Moxley and his colleagues also came up with a way to bring those glimpses of Atlanta into the public eye. “We figured the next step was to take the art from the streets to the street,” he says. “So we raised $7,500 from a Kickstarter campaign and bought an old bread truck that we converted into a gallery.”

About twice a month, the #weloveatl truck shows up at events around town and opens its doors to those who want to explore the city through a local’s lens. The photos are for sale, and proceeds go to the Food Bank. A selection of images has also been part of public art projects, including displays on the BeltLine and another at CNN Center. Last summer, the team covered the MARTA Five Points station with about 850 photos. They’re now working with a gallery in Clarkston to exhibit shots that tell the stories of the area’s diverse refugee population. But as with all the #weloveatl projects, it’s happening on a shoestring budget.

“We sell T-shirts and stickers to put gas in the truck,” says Moxley, who lives in Kirkwood. “But I’m proud that we’re doing our part to help people express their pride in the city and raise money for some charities at the same time.”