See how one Inman Park couple turned a Queen Anne Victorian into a bed-and-breakfast. 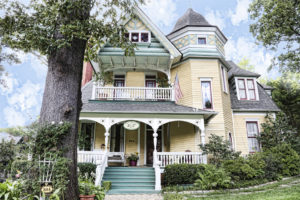 Living in Grant Park at the time, husband and wife duo Jim Emshoff and Debi Starnes knew exactly what they wanted to do with the Queen Anne Victorian they saw listed for sale in Inman Park in 1993: turn it into a bed and breakfast. “For many years, we had traveled and stayed in B&Bs, and we had thought about doing it,” Starnes says. “We were attracted to Inman Park, and when we found this house, it was laid out so perfectly for a B&B. We had our first guest a month after we moved in.”

Why were they able to open Sugar Magnolia Bed and Breakfast so quickly? The 1892 house didn’t need much work to convert it into an inn. Originally built as a single-family residence, it served as a boarding house in the 1950s. Starting in 1970, one of the previous owners started renovations, undoing the boarding rooms and turning the structure back into a single-family home.

Since 1970, the property has had four owners, including Emshoff and Starnes, each of whom continued renovations. “Fortunately, which is rarely the case, each one had done high-quality work, so each person just picked up where the last one left off,” Starnes says. “When we bought it, all the big-system renovations were done. We slowly, over the years, redecorated it.” However, Emshoff and Starnes did add on a third floor and bedroom for their daughter, Emily. 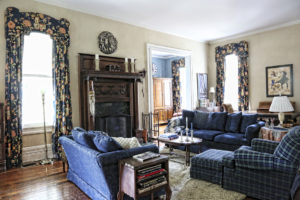 The owners outfitted the living room with comfortable furnishings where guests can relax.

Also, the owner prior to Emshoff and Starnes had painted the entire interior white, so the couple had a blank canvas for decorating. “As time went on, we just added our colors and our touches,” Starnes says. “So that’s how we were able to start the B&B so quickly.”

Today, the couple operates the bed and breakfast with their innkeeper Kathryn Kain. The house features three guest rooms on the second floor and one cottage suite in separate quarters behind the main house. For the most part, the original floor plan remains intact. Upon entering through the front door, visitors find themselves in a circular foyer that leads in three directions: to the living room, the dining room and the office. Another noteworthy feature is the three-story turret with a gorgeous chandelier that reigns over the staircase rising to the second floor.

Throughout the interior, many original features remain, including the heart of pine hardwood floors, the watered glass windows and the oval bevel windows by the staircase. It’s pure luck those last items are still in the house: As Starnes tells the story, during the conversion into a boarding house, the owner at that time removed them. But a preservation- minded neighbor purchased them at a yard sale and stored them in a basement. When the buyer saw one of the 1970s owners renovating the home, the neighbor returned the windows that were then restored to their original location. 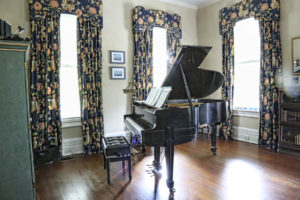 On occasion, Emshoff entertains guests at the grand piano.

Upstairs, each of the three guest rooms has its own private bathroom, and none share a wall, providing an additional layer of privacy. The Garden Room and The Aviary feature fireplaces, while The Royal Suite lives up to its name with a king-sized brass bed in a curtained alcove, a sitting area and a private balcony with rocking chairs. It also shares a rooftop deck on the back of the house with The Garden Room.

Emshoff and Starnes furnished the bed-and-breakfast with items they had in their Grant Park home and many pieces passed on from their grandparents. For instance, the pie safe in the dining room belonged to Starnes’s grandmother, while the bookshelves in the living room came from Emshoff’s grandfather. The cobalt blue glass bottles adorning the dining room mantel were part of his grandmother’s collection.

The kitchen remains a popular gathering spot for the inn’s guests.

Starnes did purchase the table in the living room at Scott Antique Markets on the city’s southside many years ago, and the couple bought the grand piano from a private seller. Emshoff is the musician in the family and routinely entertains guests with his talent. His love of music also is reflected in the various art pieces lining the living room walls. Starnes made the quilt on the couch using her late father’s shirts.

The previous owner completed some modern upgrades, renovating the kitchen and turning an adjacent porch into a den. Along the way, a two-car detached garage also was added.

However, these additions don’t detract from the home’s natural beauty and unique features. On the exterior, the house includes rows of scalloped shingles, pierced wood on the fretwork of the porch and large, turned columns. The unusual spindles featuring two rings near the top above an elongated base that widens near the bottom had to be custom-made to replace, Starnes says. 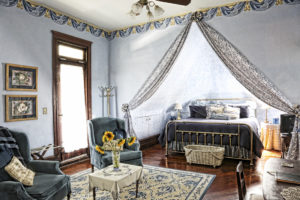 Appropriately named, The Royal Suite contains a brass bed, a private balcony and an oversized bathroom.

Although the design is typically Victorian, it’s not dark, says Starnes. “This house has a lot of natural light,” Starnes says. “We have space all around, so the light can get in.” The grounds include a manicured front yard and two small yards on each side. A side porch opens into one of those side yards, which is a favorite retreat for guests. Emshoff also likes the circular foyer because it’s good for entertaining. “People can move around easily,” he says.

When it comes to narrowing down their favorite aspects of the home, the couple have a hard time just choosing one or two. “I like all of the outdoor spaces,” Starnes says. “I like the variety of the rooms. It’s a good house for entertaining.” Emshoff seconds that, saying, “We can hold a lot of people in [the living room] and the den. And there are always people in the kitchen, of course. And it’s nice outside [on the porches and in the side yard], so there are a lot of different gathering spaces.” 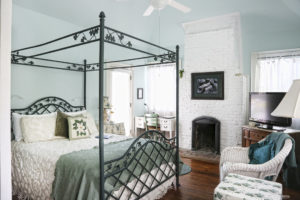 The Garden Room includes a fireplace and shares a back deck with The Royal Suite.

Overall, the couple likes how welcoming their home is for their bed-and-breakfast guests. “My favorite compliment is that it’s beautiful but also comfortable because a lot of Victorians can be sort of museum-like, not comfortable to hang out in. So I like it when guests feel like they’re in a pretty place, but they don’t have to worry about breaking things,” Starnes says. “They can lie down here and read a book. I like that.”