Meet Larissa Neto, the creative genius behind the beautiful treats of Bakey Bakes

Take a peek at Larissa Neto’s Instagram account (@bakey.bakes) and you’ll be bewitched by colorful cookies and cakes that resemble unicorns. The Grant Park resident always had a passion for whipping up sweet treats but only recently made it her full-time career.

Originally from Portugal, Neto studied to be an artist at Ringling College of Art and Design in Sarasota, Florida. With a flair for the visual arts, she worked as an illustrator in Santa Fe and New York City before moving to Atlanta four years ago. “It was a difficult path,” says Neto. “There’s not really a nine-to-five art job. It’s kind of whatever someone is willing to pay you for, you will do sort of thing, which made me disenchanted by the art world.” 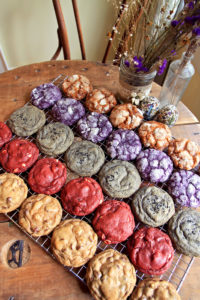 As a child, Neto had always admired her mother’s baking. After graduating from college in 2004, she delved into baking on her own. While her career in illustration grew, so did her parallel passion for creating baked goods. “People would be really hyped over the things I would bring over to parties and friends’ birthdays, and I always thought it was a fun challenge if someone told me, ‘Oh, I loved your mint chocolate cake.’ I’d be like, ‘I’m gonna make you the best one you’ve ever had.’ They were these little challenges for myself.”

In 2017, Neto decided she was ready to establish herself as a professional baker and launched Bakey Bakes. Neto makes a variety of goods, including breads and gorgeously adorned cakes. Her signature treat is her crinkle cookie, with a cake-like texture that comes in a variety of flavors. She draws inspiration from her world travels and applies those flavors to her own baking. “I get pretty enchanted by certain things, whether it’s matcha in Japan or all the Filipino ube treats I’ve had in L.A.,” Neto says. “I just take those flavors and run with them here in Atlanta, where I cannot find these things.” Ube is probably her most visually striking cookie. “Ube is a purple yam. It’s an ingredient used in a lot of Filipino desserts. I think most people might recognize it as part of a halo-halo. It kind of tastes like birthday cake, so how bad can that be?” Along with green and earthy matcha, it’s one of her most popular flavors.

Most start-up bakers follow a similar trajectory: start small, host pop-ups, open a brick-and-mortar. Neto hosts pop-ups but has no plans to open a permanent, physical shop. “I just like the freedom and the variety that comes with freelancing and having pop-ups,” says Neto, who currently bakes at home under the cottage licensing law but will soon start baking at a commercial kitchen. “With the pop-up format, I can always have the basic favorites, and I can always have the freedom to do different things and keep my customers engaged and wondering, ‘What will she have this time?’”

She credits Atlanta’s closeness as a community for the ability to do that. “I’m not sure what it would be like in any other city. I’m doing it here, but I do think that there are just a lot of little untouched notes in Atlanta that are making this journey successful for me. Whether that’s just the right people that I’ve ended up meeting and the support, or just making things that people can’t really find anywhere else. Atlanta’s been the reason for that.”

Order baked goods from her website or keep an eye out for one of her popups. In the past they’ve been held at Williams Sonoma and Coco+Mischa in Ponce City Market.