Born out of a crushing loss, Staplehouse is a temple of inventive cuisine, Southern soul and familial spirit.

The most expensive dinner I ever had cost me $600. It was at one of the most famous tasting-menu-only restaurants in Napa Valley. Spending that much on a single meal is absurd, I know, but the restaurant had three Michelin stars and nearly every other award under its belt. I thought it would be money well spent. I was wrong. It was one of the most disappointing meals of my life. Sure, each dish was the most beautifully- plated work of art I’d ever seen. But the food was bland, dull and lacked flavor.

After all the excess of that meal and others like it, I began to shy away from ultra-fine-dining restaurants. No matter how pretty the plate is, I really only care if the food tastes good. 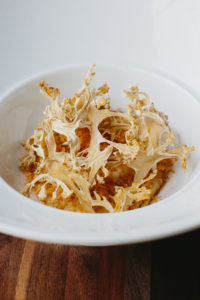 So last year, when I heard that Staplehouse was opening and limiting its options to a five-course tasting menu, I was wary. Slowly but surely, the accolades started rolling in. GQ named Staplehouse the best new restaurant of 2016. Atlanta magazine gave it four stars. The James Beard Foundation nominated it for Best New Restaurant.

Now, it was time for me to see what all the buzz was about. A year into the restaurant’s stride, I bit the bullet and booked a table for Sunday lunch, where the dishes are presented in the typical must-use-Tweezers-to-delicately place-edible-flowers-and-precisely-position foams-and-powders kind of way I’ve come to expect from white-tablecloth establishments. But at Staplehouse, there are no white tablecloths, and instead, the flavor of each dish actually surpasses the precision and beauty of its presentation.

After ordering everything on the entire menu (there are fewer than a dozen dishes total), I was blown away by how much life, texture, contrast and flavor every dish possessed. 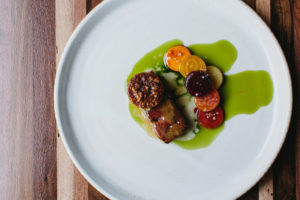 Chef Ryan Smith’s velvety chicken liver mousse, served in a delicate tart shell with a burnt-honey glaze, crunchy heirloom corn nuts and seasonal fruits (during one of my visits it was figs; another time, sweet corn) is easily one of the best things I’ve eaten in Atlanta. Ever.

My husband, a self-proclaimed mushroom hater, found his favorite dish in a bowl full of, well, roasted mushrooms. The funghi sat atop a mellow bed of farro and peanuts with an aromatic green sauce.

And those creamy curls? They tasted just like Parmesan cheese, but in reality were egg yolks, cured, dried and shaved. 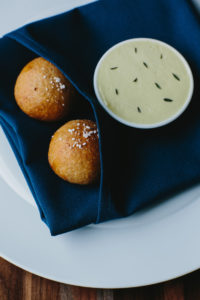 As accolades poured in for Staplehouse— Bon Appétit named it Best New Restaurant of the Year between my visits—and buzz surrounding the restaurant became louder, scoring a reservation became virtually impossible. (Fortunately, I was able to squeeze in at the bar.) So much so, in fact, that when we requested access to Staplehouse’s kitchen and chefs in order to photograph the dishes featured in this review, we were ever-so-gently refused (a first for us), with owner Jen Hidinger citing stretched resources and the team’s impending trip to New York to celebrate its recent nod from Bon Appétit. (And who were we to argue? It’s hard to be mad at the hometown restaurateur whose eatery is attracting national attention.)

During this time, the Staplehouse team also announced that, come September, its tasting menu would be replaced by an a la carte menu that had been implemented earlier this year as a result of lackluster interest in the prix-fixe.

Amid all the excitement, here’s what didn’t change: Flavor continues to trump novelty. Smith’s food is scrupulous, an edible labyrinth of dishes one couldn’t even dream of making at home, which is just what I like to order when dining out. But it is, most importantly, delicious.

Smith’s menu constantly reimagines Southern food and does so with vegetables at the forefront of each plate. Meat is a mere garnish. 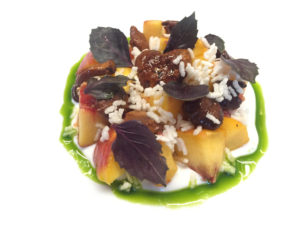 Take the puffs: The appetizer reminded me of Munchos, the dehydrated potato chips loved for their airy texture. But Smith’s are made from root vegetable scraps and served with a side of burnt onion sauce that puts Sour Cream & Onion to shame.

As the servers brought more plates to our table, they rattled off the tens of ingredients, each cooked in its own very specific way (dehydrated this, sous vide that), that Smith incorporated into each dish. I could hardly believe I was paying fewer than $20, sometimes $10, for each one.

Admittedly, the portions are quite small, so you have to rack up quite a few plates to leave Staplehouse feeling full. No matter; each bite is more euphoric than the last, many drawing on classic flavors from our youths. Take Smith’s potato dish: Voth roasted and chipped potatoes are served with banana pepper relish, pickled chanterelles, dill and tangy cheese, resulting in an exquisite plate that, despite its technical beauty, was reminiscent of a bag of salt and vinegar chips. 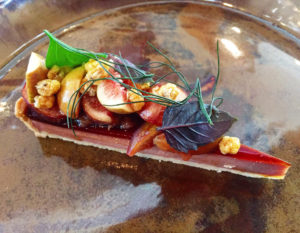 A look around the cozy and intimate dining room took in smiling faces, laughing and communing, and the chefs creating masterpieces in the open kitchen. It was clear I wasn’t the only one experiencing nirvana.

In fact, so much warmth and joy emanates from Staplehouse that it’s easy to forget the restaurant was born in sorrow. In 2012, the original chef, Ryan Hidinger, was diagnosed with cancer just as he and his wife, Jen, were running a supper club and raising money to open their own restaurant. Hidinger passed away in early 2014, but Jen, along with Ryan’s sister, Kara, and Kara’s husband, Ryan Smith of Restaurant Eugene and Empire State South, opened Staplehouse as a team. 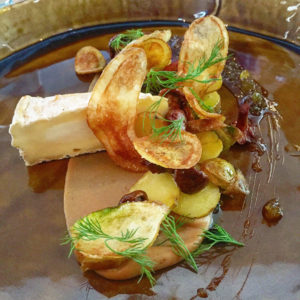 During Ryan Hidinger’s cancer battle, friends in the restaurant community banded together to raise funds for his treatment. The first Team Hidi event raised more than $275,000, and the leftover money was the impetus for The Giving Kitchen, a local charity that provides financial relief to restaurant workers in times of hardship. Today, The Giving Kitchen has raised nearly $3 million. What’s more—all of the restaurant’s profits after payroll and taxes go to the charity.

It’s no wonder dining at Staplehouse feels more like joining a family dinner. Though the food is meticulous, the decidedly unpretentious space is more akin to hip friend’s apartment, with exposed brick and subway tiles cladding the walls of the long, narrow room, where friendly staff mingle with patrons as if they were old friends. Most probably are, or soon will be. That’s the Staplehouse effect. You come after hearing the Hidingers’ story, stay for the people, and continue to return for Smith’s ingenious comfort food.

Dedicated to the Design