Loupe puts art in the Loop

The streaming program provides ambience for home and work

Imagine coming home and being surrounded by inspiring art that didn’t cost you a dime. Images of far-away streetscapes, bucolic countrysides—whatever genre you find most appealing pops up on flat screens and computer monitors in every room. 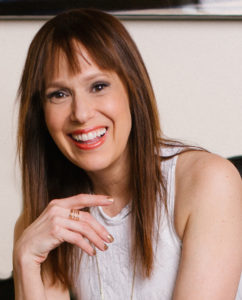 Streaming quality, curated art without charging for access is the key concept behind Loupe, a Cabbagetown-based venture founded by neighborhood resident Dot Bustelo. The former New Yorker hit on the idea of doing for art what Pandora did for music while working as part of Apple’s product marketing team.

“I was traveling around the country introducing professional music-producing techniques to producers, and I spent long hours in recording studios,” Bustelo recalls. “I found myself looking for visual support for the creative energy in the room, so I turned on old 1940s movies or sci-fi films with no sound just for the visual stimulation. People responded so well to it that I thought about building a platform dedicated to adding visual art as an accompaniment to a social experience, such as listening to music.”

Bustelo’s creation, Loupe, applies the same technology of music streaming to visual art, allowing the more than 150 million listeners who engage with sound through online services to do the same with images. More than 20 channels offer backdrops for almost any taste, from abstracts to travelscapes. A recently revised Loupe program now allows viewers to create personal galleries of their favorite images and to coordinate the color and style of screen visuals with a room’s décor.

“It’s been very interesting to look at which channels are the most popular—and they’re not what we expected,” says Bustelo. “A picture of a monkey, taken by a National Geographic artist, is at the top. Another hot spot is the ‘Places I Have Never Been’ channel that opens with a picture of a car in Cuba.”

Regardless of audience, all the streaming images are the work of serious artists from around the world, many of whom contact Bustelo asking to join.

“The artists are not charged; it’s free to submit and have something shown,” she says. “And since it’s a global platform, the work can be seen in about 80 countries, so it’s a great way to gain exposure and sell the art.”

Loupe makes that buying process as easy as viewing, in case one special work leaps off the screen. “It may compel you to do more than add it to your private gallery,” says Bustelo. “If it truly resonates, you can purchase the original or a print and hang it on your wall.”

Bustelo’s research shows that many Loupe users have the program running for almost three hours at a time. “What we haven’t entirely gotten to the bottom of is whether people are using it at home more than in the workplace,” she says, “but anecdotally, I’m hearing it’s a little of both. You can turn on Loupe for ambience and tranquility wherever you are.”

Check out the artworks streaming at Loupe on loupeart.com. 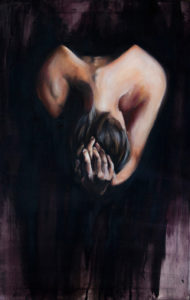 Nicole Kutz’s “She Once Fell Through The Street.”

Through August, the Cabbagetown based Loupe streaming art service is giving travelers at Atlanta’s airport a break from the bustle with calming images displayed on several screens in the arrivals and duty-free areas. The installation features works by Atlanta artists, including the project’s curator and featured artist, Nicole Kutz.

“The main purpose was to feature artists who are based in Atlanta,” she says. “Everyone is actively making it work in this city, so that was the first way we narrowed it down. Then I took the most eye-catching work, something that would grab even the most distracted person for a moment to appreciate something artistic.”

Kutz’s contribution is a set of abstract paintings that reflect just one of the styles she’s drawn to. “I do dabble a lot; I like realistic portraits but also large abstracts. I also work in mixed media with plaster and emulsions, and I also love oil painting.”

A recent Master’s graduate of Midtown’s SCAD Atlanta, Kutz finds her inspiration in the world around her. “I can find an idea in everyday things, like the bark of a tree,” she says. “Those little things really capture my eye.”

Along with traditional artworks, Kutz has started making scarves and recently launched her own company, Sky or Silk. “I was doing paintings on silks and linens, and that gave me the idea,” she says. “I also wanted to do something in the wake of my grandmother passing away from Alzheimer’s, so a portion of the profits will go to the Alzheimer’s association.”

While getting the company up and running, Kutz is also preparing to head west to introduce Loupe to L.A. But art lovers will still be able to connect with her work on Loupe and her website, nicolekutz.com.