They’ve probably had their fair share of beers before, but another round is in order, now that being 21 makes it officially legal. The gang at Dad’s Garage Theatre is hoisting more than a few to celebrate arriving at adulthood, a milestone not often reached in the whimsical world of improvisational comedy.

They’ve weathered being homeless for three years, when they shared stages with other area arts groups that took them in. They held on through the economic downturn, when things weren’t as bleak as they could have been, since “beer and comedy do rather well during a depression,” says Managing Director Lara Smith. And they’ve continued to thrive, gradually increasing the audience draw while giving classes at various venues around town, buying and rehabbing an old church and constantly being on the lookout for corporate gigs and grants.

Co-founder George Faughnan says the idea to launch an improv company “started from sheer hubris, not because it was something most people do directly out of art school.” The Florida native was part of a nine-person team that launched Dad’s in 1996.

“We were at Florida State and doing improv in bars,” he recalls. “We were pretty popular on campus. One day, someone asked, ‘Why not open your own theater?’ So we started saving money we earned from improv to put a down payment on a space.” And the name? “Well, as an artist, you’re not going to get anywhere without the support of your family,” he says. “Since most of us were males, we’d had a lot of freedom playing around with tools in our dads’ garages, so it was an homage to their patronage.” 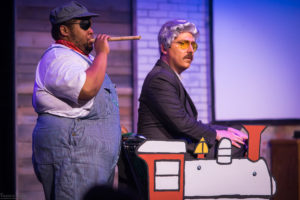 With Atlanta then gearing up to host the Olympics, the city seemed an ideal location for a budding business. At the time, there was no operating improv theater with its own space, and Faughnan and friends were able to secure the area’s theatre sports franchise, a copyrighted improv format. They spent the next 18 years on Elizabeth Street in Inman Park until the building morphed into Inman Quarter, and they were kicked to the curb.

“We were experiencing exponential growth, so we would have been looking for a new home anyway,” says Smith. “In 2007, our budget was about a half million. As of August 1 this year, it was $1.3 million. Our class sizes have nearly doubled, and we’re doing five to seven scripted shows a year with improv in between. And we run corporate workshops on team-building, public speaking and collaboration. Our strength comes from the diversity of revenue.”

It also comes from having very funny people who keep audiences and corporate clients coming back. The ensemble group of professionals has 20 members; the general company of less seasoned performers has about 40. Ages, backgrounds and reasons for doing improv vary wildly, but everyone gels, says Artistic Director Ed Morgan, who quit a day job in advertising to be part of Dad’s 11 years ago.

“We have people in their mid-20s, people like me in their 30s, and founding members who are still improvising in their 50s,” he says. “I think that shows there’s the potential for a life in improv. The right amount of dedication and practice can make anyone good, if they need to approach it with an open mind and a willingness to listen. I tell students being funny is the last thing they should worry about; it’s about responding to your partners.”

Members hone their responsive and often witty skills through ongoing workshops where the focus is on one aspect of improv. “We’ll take two hours to, say, work on movement or to improvise exclusively in the manner of Shakespeare,” says Morgan. “It’s less about ‘rehearsing’ for a specific show than learning a format.”

Since improv is always a one-night stand, Morgan has few memories of specific shows that were runaway hits. “Well, I remember a lot of great nights, but I’ve also trained my mind to get past bad shows by understanding it’s only one hour of my life that won’t happen again, so I tend to forget the good ones, too. But that keeps you humble.”

In early 2014, Dad’s launched a Kickstarter campaign to buy a permanent home and raised more than $150,000—one of the most successful theater campaigns in Kickstarter memory. The funds went toward the purchase of a former church on Ezzard Street that cost $2.05 million, with another $850,000 tacked on for renovations, including a bar area, classrooms and two performance areas. The future is rosy, thanks in some part to the surging popularity of TV comics and Georgia’s burgeoning film industry that’s making careers in the arts more viable. But even with a milestone birthday to mark, it’s still not enough for Faughnan, now 37, to quit his day job with TBS Properties.

“I’ve always had another job,” he admits. “Part of me doesn’t trust the business model of artistic endeavor.”