WHERE TO GO FOR YOUR JOE AND A NOSH

Need a caffeine fix? You’re in luck. Atlanta is overflowing with excellent coffee shops. Whether you’re looking to keep it hip or cozy, the city’s wealth of java joints has a cup for everyone.

With crisp and modern interiors, Chrome Yellow is an Edgewood gem whose space is divided between a coffee shop and a boutique. If you’re looking for craft goods to go with your cup, Chrome Yellow is the place to go. In the shop you’ll find stylish monochromatic t-shirts, mugs, and Atlanta pennants. Recently, Kelly and Kyle Taylor rearranged the space to give patrons more seating, making it an ideal work spot. The bourbon vanilla latte is a must-try: A sweet syrup is made with bourbon and infused with vanilla. The result is a latte that’s slightly sweet and smoky, and entirely delicious. Pastries from Proof Bakeshop and a limited lunch menu from Eat Me Speak Me are also available.  chromeyellowtradingco.com 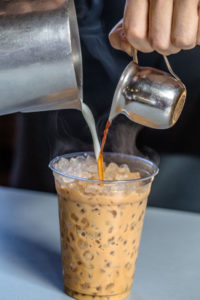 Founded by Stacy Eames, Highland Bakery’s original location in Old Fourth Ward is an Atlanta institution. Go for breakfast or lunch any day of the week, but brunch is a classic with shrimp and grits with jalapeño focaccia bread, and sweet potato pancakes. The java of choice is the locally roasted Batdorf & Bronson, to boot. highlandbakery.com

You can find Proof Bakeshop’s goods throughout the city, but it’s always best to get them straight from the source in the cozy Inman Park shop. Besides an array of pastries and bread, Proof also serves breakfast and lunch items, such as soups, salads and toasts. Craving a caffeine fix? Proof pours Counter Culture coffee and has a full coffee program with plenty of espresso drinks available. The space is warm and intimate, so bring a book in case you’re lucky enough to snag a seat.  proofbakeshop.com

What makes Revolution Doughnuts, found on Edgewood, revolutionary? Many are vegan that taste just as good as traditional options. Unique flavors include pecan praline Long Johns (bar shaped, filled doughnuts), savory “everything ” (like an everything bagel, but in doughnut form) and pistachio-orange. The shop is small, but there’s enough seating to cozy up with your doughnut and a cup of coffee from Cafe Campesino—a local roaster based in Americus, Ga., that describes itself as Georgia’s first 100% fair trade, organic coffee company.  revolutiondonuts.com 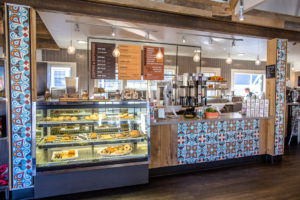 Press & Grind offers baked goods and more along with coffee.

Shipping container restaurants are sprouting up around the country, and Brash on the Westside is among the first in Atlanta. The micro-coffee shop is snug, with with seating along the windows and outside. The small size and ample natural light flooding in create a tranquil atmosphere. Brash, owned by Chris McLeod, sources its coffee directly from farmers and roasts its beans at a facility in Athens. Don’t expect to find an array of fancy, flavored syrups here; Brash sticks to classic espresso drinks and pour-overs, but they’re so good, you won’t miss a single frill or gimmick.  brashcoffee.com

Dancing Goats, the coffee shop owned by local roasters Batdorf & Bronson, has two locations in the Midtown area: one in the heart of the city by the Midtown MARTA station, and another at Ponce City Market. Their vibes are different: PCM’s has a sprawling outdoor patio with hanging chairs; Midtown’s is a more traditional setup. But the coffee is stellar at both thanks to Batdorf’s expert roasting precision. Baristas also make seasonal espresso beverages (think ginger and turmeric cappuccinos) that awaken your senses.  batdorfcoffee.com 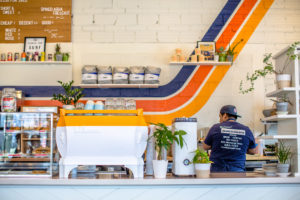 Opened in 2017, Muchaco serves its coffee with a side of retro style.

Once you step through Muchaco’s bright yellow door, you might feel as if you’ve entered a time warp. The small coffee shop adjacent to Golden Eagle in Reynoldstown is “retro-California” with floral accents and yellow and orange hues (check out that espresso machine) throughout. Baristas skillfully crank out espresso drinks made with Counter Culture coffee and serve up breakfast and lunch items such as grain bowls, toasts and tacos. Don’t leave without sampling something from the pastry case; Muchacho is one of the few intown shops to offer Latin treats such as medianoche (small sandwiches) and empanadas.  muchachoatl.com 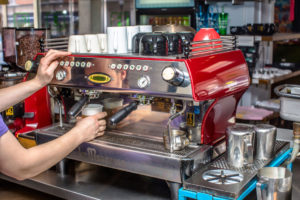 An espresso drink in the works at Inman Perk

Can you beat a coffee shop just steps from the BeltLine? Inman Perk is spacious, with plenty of tables for groups to gather around, plus nice sidewalk seating that’s perfect for lounging when the weather is just right. The shop’s more decadent Intelligentsia Coffee creations include the “turtle mocha,” with caramel and chocolate syrups.  inmanperkcoffee.com

Hugh Acheson’s renowned modern- Southern restaurant may not seem like it belongs on this list, but if you go early in the morning, you’ll understand why we love it. Yes, at night it’s a bustling dinner spot, but during the day, a dedicated coffee counter is ideal for ordering a cup of freshly brewed joe and one of the restaurant’s flaky biscuits. Empire State South baristas use the Kalita glass brewer (pour over) as their main method of brewing. Because it’s made of glass, you’re more likely to enjoy the pure flavor of the coffee—as opposed to a metal vessel, which can warp the taste. Espresso drinks are also available.   empirestatesouth.com 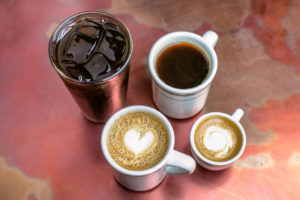 Coffee’s on at 8Arm.

Although the trendy Virginia-Highland brainchild of the late Angus Brown has bloomed into a hip, nighttime watering hole, by day it’s a coffee lover’s dream. Matt Mullins oversees the coffee program that rotates among roasters, including locally roasted East Pole, and the kitchen keeps a fine array of pastries. Green plants set against the crisp white backdrop and sun pouring in through the windows sets a tranquil scene for java sipping. Later this year, 8Arm will expand into Paris on Ponce with a new restaurant and coffee shop, 3 Heart, where they’ll roast their own beans. It’ll face the BeltLine, so stroll up and order a cup of Joe to go.  8armatl.com