Plenty of people around Atlanta love to run, but, more often than not, geography dictates groups’ routes and keeps them from exploring too far outside their own base areas.

The Big Ol’ Group Run is an annual event out to break down those barriers. The run starts at Urban Tree Cidery on Howell Mill Road and comprises 3- and 6-mile routes that gather running groups—think running store staffers, organized neighborhood groups and racing teams—for a night of fun and fellowship that gives participants a chance to train outside their normal territories.

The Run was created and hosted by runningnerds, an inclusive running community founded in Atlanta by Tes Sobomehin. So whether you run a mile in six minutes or 12, whether you’re a seasoned marathoner or have never laced up a pair of sneakers, don’t worry—runningnerds’ events were created to be accessible and approachable for all who have an interest in the sport.

Big Ol’ Group Run starts at 6:30 p.m., and runningnerds will host a group social, complete with cider and a tour of Urban Tree Cidery. Register your group at active.com. The $5 fee includes a commemorative bib name tag, Big Ol’ Group Run cup, one free cider at Urban Tree Cidery, a raffle entry and a chance to win prizes. In its second year hosting the event, runningnerds hopes to draw a crowd of up to 400—which means you’re bound to end the night with at least one new training partner. 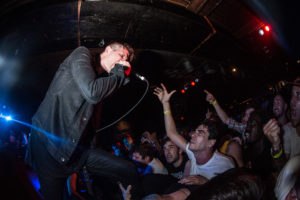 In the same spirit as its inaugural celebration last year, this year’s Wrecking Ball promises an epic line-up of punk, indie, emo, alternative and hardcore rockers.

More than 60 emerging artists are slated to play throughout the weekend, in addition to reunions from Piebald, Promise Ring, Thursday and more. Headliners include Deerhunter, Motion City Soundtrack, Quicksand, Sorority Noise and The Joy Formidable.

The Masquerade serves as the backdrop for Wrecking Ball, with two outdoor stages and three more intimate indoor club stages hosting performances. An assortment of Atlanta food trucks will be on hand throughout the weekend to serve up belly-filling plates, including vegan and vegetarian options, and beer will be poured for thirsty concert-goers. General admission for a single day pass is $65, and a two-day general admission pass is $110. Want even more music? Cough up 10 extra bucks and head to the pre-party, “Atlanta is the Reason,” on August 12 that kicks off the weekend with a round-up of punk and emo classics.

Discover the cultures and ecological environments of the six continents that Zoo Atlanta’s animals call home, from Asia and the Pacific to Africa and the Americas. Entertainment features live music and dance performances, in addition to family-friendly crafts. Wild World Weekend runs from 10 a.m. to 4 p.m. Saturday and Sunday.

Free to attend, this event is a fun showcase of speed, creativity and bonding between dads and kids, where little ones aged 4 and older get behind the wheel to race their homemade cars. Cool Dads Rock, the event’s sponsor, is a nonprofit geared toward building meaningful relationships with fathers and their children. Races run from 11 a.m. to 4 p.m.

One of Piedmont Park’s most celebrated events, the Piedmont Park Arts Festival, gathers art aficionados to peruse the work of more than 250 artists whose work includes paintings, photography, sculptures, metalwork, crafts, glass décor and jewelry. The festival also features an emerging artists tent, artist demonstrations, live music, a kid’s zone and a variety of concessions. In its 8th year, the festival draws talented artists from around the country.

Yacht Rock Revue leads this year’s Yacht Rock Revival, with music and comedy acts paying homage to the 1970s and ‘80s, including seven throwback performers from the era. Bring blankets and chairs to Piedmont Park’s lower meadow and hillside and join fellow fans in reminiscing about the genre’s glory years. Standard general admission runs $30, but for $60, you’ll get VIP perks, which include use of an air-conditioned tent at Park Tavern, a bourbon bar and exclusive food offerings.