Chattanooga is for Food Lovers

A delicious weekend getaway is only 1.5 hours from Atlanta

Many food enthusiasts who hit the road for a weekend escape from Atlanta usually head to Charleston. Lately, though, foodies are turning their attention, and their cars, toward Chattanooga.

A mere hour and a half northwest of Midtown and just over the Tennessee border, you’ll find yourself in the Scenic City, with a beautiful walkway along the Tennessee River, a charming downtown and plenty of places to get your grub on. Recently, Chattanooga chefs have been gaining recognition for their seasonal, regionally inspired cuisine served at high levels of execution. A close-knit community of chefs and farmers means the “farm-to-table” spots actually are, and whether you’re looking for fine dining or something casual, you’re bound to find a fit that strikes your fancy. 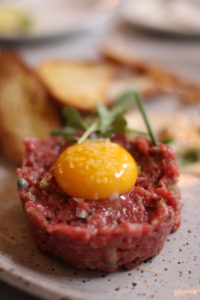 Easy Bistro’s tartare is topped with a sunny, soft yolk.

One restaurant worth the drive is Easy Bistro and Bar, the creation of Louisiana native Erik Niel. The French-style restaurant is set in a former Coca-Cola bottling plant and is upscale yet unpretentious. The industrial space is polished, with black walls, mosaic white tile and a surprising burst of color from the lime green couches in the bar area. Niel focuses the menu on the classics with a modern twist, with smoked trout tarte with Meyer lemon, red onion and pickled herbs; Nantucket Bay scallop crudo with leche de tigre, peanut butter and radicchio; and the steak frites with Wagyu sirloin, fries and herb butter. For something more laid back but still palate-pleasing, head to Niel’s other restaurant, Main Street Meats, in the Southside neighborhood, where his team processes and cures mostly locally sourced meats in-house. The burger made with local ground beef, house pickles, mustard, mayo, caramelized onions, bacon and Gruyère is a crowd pleaser. Niel isn’t just popular among the folks in Chattanooga; he’s been nominated for a James Beard Award—twice. 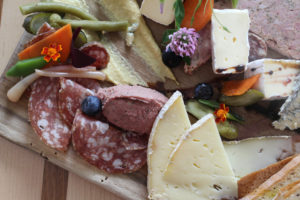 Rebecca Barron helms Chattanooga’s elegant fine dining staple, St. John’s Restaurant. The flatiron building it occupies once housed a turn-of-the century hotel. With its gleaming white floors, soaring ceilings and two-story windows with vintage details, you know you’re in for something special when you set foot inside. Barron works closely with Crabtree Farms, a nonprofit that provides education and assistance to the community and sells crops to several local restaurants—so much of the produce on the menu is local. The menu changes frequently, but you can always try a variation of Kenny’s biscuits. Named for Sous Chef Kenny Burnap, the biscuits are fluffy and served with pork belly and seasonal toppings. 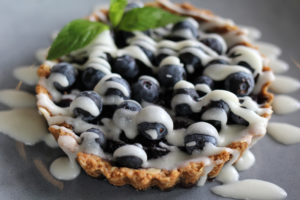 Satisfy a sweet tooth with the Flying Squirrel’s blueberry tart.

Even casual restaurants manage to impress in ’Nooga. Another Southside gem, Flying Squirrel Bar, looks like an urban cabin with high ceilings and a wood-glass exterior and interior. With sustainability at the forefront, the restaurant incorporated wood from a 115-year-old barn and beams from a knitting mill. The inside easily transitions to the outside on a nice day, thanks to windows that open along it and an outdoor bar that faces inward. The restaurant specializes in high-end pub grub such as Burt’s fried chicken, made with a secret spice blend (order it spicy), and the Cuban tacos with mojo pork shoulder, pork belly, red dragon cheese and pickle. Lighter bites can be found Downtown at Southern Sqweeze, which could just as easily be a hangout in Southern California, thanks to the smoothie bowls, superfood lattes and toasts that are available for breakfast and lunch.

Rest your head at the boutique Dwell Hotel (at the very least, swing by its bar, Matilda Midnight) or at the surprisingly well-styled Springhill Suites—the only riverfront hotel in town.