Did you know that “bocce” is an Italian term that means “to bowl”?

And that you can play bocce year-round at locations across the city? Thanks to the Atlanta Bocce League, you really can. Boasting 100 teams that play on various nights of the week at bars including Ormsby’s, The Midway Pub and the Painted Pin, as well as in Piedmont Park, the league offers plenty of opportunities to take part in the sport that hails from the Roman Empire. And it’s an excellent option for players of all skill levels.

“There’s a simplistic aspect to bocce that makes it available to everyone who wants to play,” observes Chris Walbert, founder of the Atlanta Bocce League. “While there is a steep learning curve at the beginning, you usually get through that during your first season. When you play again, you get better. And you just keep getting better.”

Each game lasts between 30 and 45 minutes, and games are played both indoors and outdoors, depending on the venue. Teams are comprised of at least five people; the winning team is the first to reach 15 points. And during play, which offers a great opportunity for chatting and social interaction while you wait for each player to take a turn, work on learning the unique—often Italian—terms (See Know Your Terms) so you can talk the bocce talk. 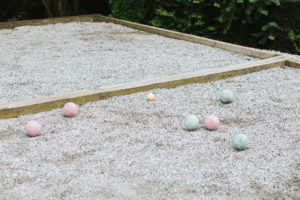 Bocce is the plural of the word “boccia,” and the game should never be referred to as bocce ball.

The pallino, also known as the Jack, is the small ball that’s tossed out first and acts as the marker. If your team is throwing, you have the pallino advantage.

The game play and awarding of points happen during a frame, which is also known as a giro.

Lagging is the underhand throwing action used to roll the bocce ball toward the pallino.

A kiss is when the bocce ball is tossed and touches the pallino where it rests.

A spock is an underhand, forceful throw that is designed to hit and move the pallino or one of the other team’s balls.

A high-arching, hard throw that goes beyond the center line of the court in order to spock another ball, a volo is actually a no-no because it is dangerous to other players and can damage the bocce balls.