A toast to good music, cocktails and food at The Sound Table

Late one Saturday afternoon I called The Sound Table in the Old Fourth Ward to get reservations that evening. “What time do you want to come?” a man with a friendly voice asked.

The place opens at 7 p.m. every Wednesday through Sunday. “Can we get a table for two at 7?”

“That won’t be a problem,” he promised without even asking for my name. 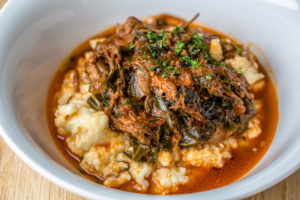 Oxtail and grits with stewed collards.

Indeed, we were the first to arrive. We were graciously seated and ceremoniously presented menus, then our server proceeded to spray industrial-smelling cleaner on all the tables around us before wiping them down. He already knew what we would discover: The Sound Table gets busy in later hours.

“Would you like to order a cocktail?” he asked. Fourteen options are presented on the bar menu, along with about a dozen beers and a dozen wines.

“What’s the most popular drink?” I asked.

“Unvanquished,” he said without hesitation. It’s made with bourbon, pine liqueur, maple syrup, lime, orange bitters and cardamom. We ordered one, along with a Darker Half, a mix of rye whiskey, sherry, cocao, dry curacao, lemon and ancho chile. 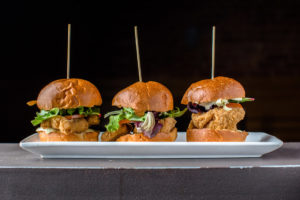 While we pondered the food menu, a group arrived and sat across the aisle. Since nobody else was yet in the dining room, I couldn’t help but overhear them tell the server that they’d rushed here straight from the airport on the advice of a friend. This was their first stop after arriving from Egypt.

Both drinks arrived and proved to be well balanced, interesting, delicious and sophisticated. Unvanquished’s spicy, earthy notes are softened by fresh, sweet tones. Darker Half maintains a spicier edge with a throat-tingling heat that dominates the finish, an effect that’s especially appealing when paired with food.

As people trickled in, the place began to reveal its personality. Candlelight, music and a pulsing beat set a let’s-get-to-know-y’all mood. Our laid-back server was friendly and remained attentive, even if he never quite smiled. When asked for food recommendations, he said, “You can’t go wrong with any choice,” rather than offer a hearty endorsement of one specific dish. 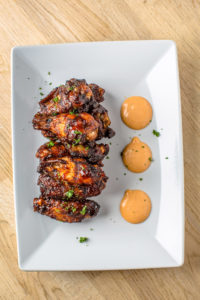 “It’s a carefully curated menu,” he explained, waving his finger down the list of 15 small-plate options. “It’s not a seasonal menu; it doesn’t often change.”

Later, I’d learn from Chef Manny Ibarra, who’s helmed the kitchen for about three years, that in his tenure only two dishes have never changed: the equally addictive Belgianstyle frites, served with house-made mayonnaise; and cauliflower and Brussels with lime jalapeño, rice wine and cilantro. Other dishes have rotated in and out based on popularity.

Shrimp chorizo tacos top the popularity chart, with good reason: An order includes three tacos, each about three bites in size. Savory yet sweet-tart, they’re finger-licking good. Oxtail and grits is my personal favorite. Creamy, stone-ground grits prove the perfect textural and flavor match to the savory braised beef poured on top. Each bite deserves its own “mmmmm.” PEI mussels are drenched in a spicy red diavola sauce so yummy you’ll be glad for the crusty baguette that accompanies the dish to sop up every drop. No need to debate between the crispy catfish sliders and lamb burger: Order both, and good luck picking a favorite. Hangar steak is cooked to order, served in a generous portion, and, like most every dish, easy to share and consume in a social setting. 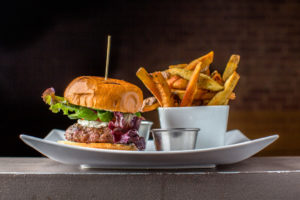 A piled high lamb burger is accompanied by a side of crispy fries.

On a second visit, we arrived on a Wednesday at 8 p.m. to discover that a political rally for a gubernatorial candidate was just wrapping up. The place was packed; even as the candidate left, potential supporters lingered. A high-energy mood vibrated between the lively conversations and music.

The server from our previous visit recognized us and made his way to our table for drink orders. Both the tequila-based Shining City and vodka-based The Wrong Man impressed with balanced sweet-tart refreshment. Drinks here are interesting, refined. 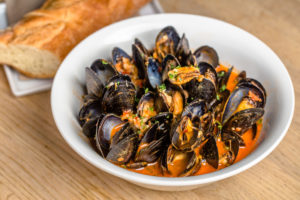 PEI mussels are doused in diavola sauce and served with a crusty baguette.

“We focus pretty heavily on cocktails,” says Karl Injex, who owns The Sound Table along with his wife, Mouna Essa. “The philosophy is that the food is designed to complement the bar and music programs. We want the food to be very a la carte and modular so you can put together a meal or flavors to work with the various cocktails. This is a place where you can actually have a nice, intimate dinner, and then you don’t have to go anywhere else for a nightclub. We bring the two together.”

The Sound Table is a community hub where you might bump into international tourists or neighbors while satisfying taste buds and ear drums. 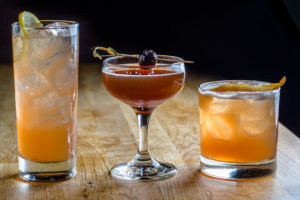 Bottom Line: The Sound Table serves high-quality cocktails and food at value prices, accompanied by mood-setting music that ramps up as the night progresses. The casual space has a welcoming vibe.

From Streetscapes To Gallery Walls