5Church pays attention to artistic touches on the walls as well as the plates.

For an initial first visit to 5 Church restaurant in Midtown, it may not be the custom concrete bar or the enticing menu that draws attention. Instead, it’s more likely to be all that scrawling across the ceiling and up the walls. Is it artistic graffiti? Random words of wisdom in white paint across a black backdrop? 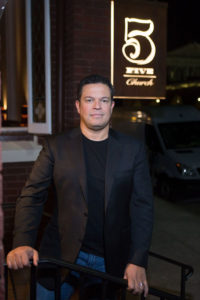 Neither, explains partner Ayman Kamel. It’s an entire book. And it’s the same book that’s written across the interiors of the restaurant’s forerunners in Charlotte and Charleston. The Art of War, an ancient manual on how to wage battle, dates to fifth century B.C. China, but a few of its pearls of wisdom drew the attention of the owners. One of their favorites, “There is only we,” streaks across the back of the bar area in gigantic letters not only as a visual effect but as the company’s approach to doing business.

“It started because in our first restaurant in Charlotte, we wanted a black ceiling, but somehow, it didn’t look right,” says Kamel. “So we had this idea to write on it, and what started small became the whole book.”

The tradition of painting an entire book between ductwork and lighting fixtures continues in Atlanta, as does mixing the number 5 into the artwork. But several pieces that connect to Atlanta were commissioned by local artists to make the Colony Square location specifically city-centered. One example: The wall behind a row of tables in the main dining room holds a painted $5 bill, accented with the face of Martin Luther King, Jr.; railroad imagery that connects to the city’s beginnings as a major transportation hub; and the word “resurgens,” Latin for “rising again,” an idea that has long been associated with Atlanta’s history as a town that knows how to bounce back from adversity. 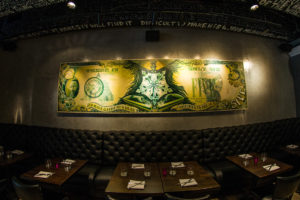 Kamel also tapped local artists to add to the visual menu. Michael Puzio of Puzio’s Iron Studio on the Westside put his creative touch in the center of the dining room, designing a floor-toceiling tree with a trunk, limbs and leaves made of welded iron. William Massey III, who specializes in creating works of disparate pieces that have been showcased along the BeltLine and in several local galleries, came up with a gigantic buffalo nickel (a “5” reference) that fills most of the wall in the back of the dining room. The appeal of the piece is in its makeup: From a distance, it appears to be an oversized coin. But up close, look for the individual elements—a paint brush, a shoe, spoons, a license plate and thick coils of rope.

An Atlanta theme crops up again in the private dining area. The rear wall of the room is covered with a 3-D, three-panel installation of Georgia pine trees in various sizes and shades of blue. Twinkling lights glitter in the dark sky across the top of the work, but what most viewers will be drawn to first is the silver, saucer-shaped spaceship hurtling out of the far right corner.

“It’s edgy, but I think that’s the kind of good art people talk about,” says Kamel. “This is such a popular piece that people are always back here having their pictures taken with it.” Another wall puts an edge on what appears to be a primitive painting of downtown Atlanta in the 1950s. But look closely: It’s really a composite of images that depict the city’s transition into the future. The helicopters are being chased off the canvas by spaceships; pedestrians on the sidewalk are being crowded out by figures on Segways and scooters.

Kamel’s commitment to getting local art into the design meant vetting area artists and then merging their constraints into a construction schedule that revamped the former club space into a dining destination.

“The hardest part of this job was managing the artists,” he says with a laugh. “With contractors, you can say, ‘This is our building deadline, period.’ But you can’t do that with artists who need more room to be creative.”