Tiny houses—those portable residences with fewer than 1,000 square feet—gain traction as a new residential housing option throughout Atlanta, but zoning presents stumbling blocks for citizens ready to call them home. We take a look at what lies ahead here for housing’s biggest— make that tiniest—trend. 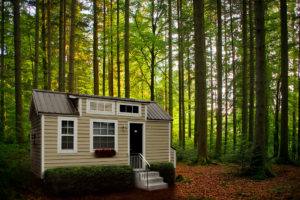 A house by Tiny Home Builders nestles nicely into the surrounding woods.

Across the nation, tiny houses have captured the attention of people of every age, income and social status. Television shows such as “Tiny House Nation” and “Tiny House, Big Living” have fueled that interest, and Atlanta has not escaped the spell.

Contrary to its recent rise to the forefront, the concept of living in small homes is by no means a new one. Simply look back at housing from the earliest of civilization for proof: one-room shacks, teepees, log cabins and so on. The difference, though, is those homes were small by necessity; today’s tiny house residents are choosing to downsize. Just how small they go is up for debate.

Some tiny house aficionados define these structures as having no more than 400 square feet, while others say they contain no more than 1,000 square feet. Regardless of which definition you prefer, there’s no doubt tiny houses are much smaller than the average single-family home—2,661 square feet of space, according to the Census Quarterly Starts and Completions by Purpose and Design and National Association of Home Builders analysis. 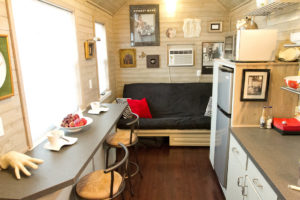 Inside, the cozy kitchen is complete with a dining counter, a prep area and extra seating.

Likewise, no one specific touchstone sparked the recent tiny house movement. Many credit builder Jay Shafer, who built his “Tumbleweed” tiny house in 1999 and put it on wheels, launching his first company, Tumbleweed Tiny House Company, in Colorado Springs, Colo., before starting Four Lights Tiny House Company in Sebostopol, Calif. Others credit author Sarah Susanka and her 2009 book, The Not So Big House, that focuses on quality over quantity.

Closer to home, the tiny house movement received a huge boost from 37-year-old Will Johnston, executive director of Tiny House Atlanta, a nonprofit that seeks to educate individuals, groups and government bodies on micro-living, walkable and sustainable communities with a small environmental footprint. Based in Midtown, the organization evolved from a Meetup group Johnston started three years ago and that continues to hold monthly educational and advocacy meetings regarding the movement in Atlanta. Johnston learned about minimalist living during a trip to New Zealand three years ago, and, upon returning to Atlanta, sought to bring awareness and advocacy of micro-living to the city. 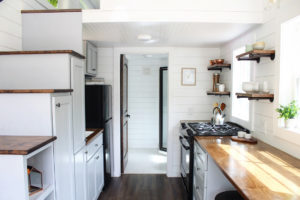 A house by Atlanta-based Mustard Seed TIny Homes is well-styled, from its tiled floors to its paneled walls.

“The tiny house movement looks at the utilization of space and also at lifestyle,” Johnston says. “We, as Americans, have gotten used to space, even though, back in the day, we didn’t always live big. We just kept getting bigger and bigger and bigger. And we kept defining success as having more space.”

Johnston says tiny houses are important to Atlanta intown living because the city population continues to increase while the cost of living is going up, but wages are not. “We need innovative ways to live larger with less space,”

Johnston says. “Tiny houses show that we can embrace innovative ways of housing to create that walkable, community, intentional living that a lot of people are looking for.”

Johnston isn’t the only Atlantan to hold that view. Earlier this year, interior designer and architect Jeffrey Bruce Baker displayed a model tiny house that he designed—called the Neolith Modern Tiny House—in collaboration with the Spanish materials company Neolith outside his studio and business on Zonolite Road, near North Decatur. Its purpose: to showcase living big in small spaces. “Good design sells, and it’s all about proportions—when math and art dance together,” Baker says. “Jeffrey Bruce Baker Designs feels that tiny house living is about living responsibly, but without compromising. Small places can have big design and advanced organization and functionality.” He adds, “You don’t need to have a large home to have it all. The home [we designed] is equipped with all the amenities of a custom home, including a full-size kitchen with Miele appliances, two bathrooms, one loft bedroom, a home theater and roof deck, and it has 425 square feet of indoor living space.” 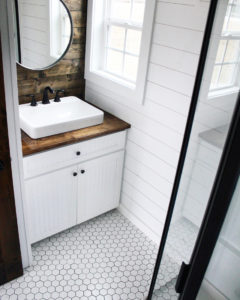 At the same time, though, some people think tiny homes could be a detriment to intown living. “We think if it’s smaller or cheaper, then it creates blight,” Johnston says. “People are put off by it because it’s different. People are afraid this might affect their own property values.”

There’s also the misconception that those wanting to live in tiny homes are college students or millennials, or people who see micro-housing as a solution for the homeless.

On the contrary, approximately two out of five tiny home owners are 50 years old and up, per TheTinyLife.com. The same site also points out that tiny house people are on par with the average college graduation rates, and, in fact, are twice as likely to have a master’s degree.

“There’s not one demographic interested in tiny houses,” says Kim Bucciero, a board member for Tiny House Atlanta and a Virginia-Highland resident. “It’s evenly distributed.” 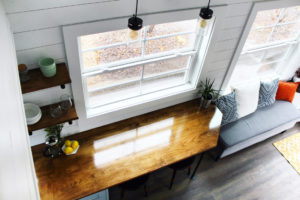 Despite the interest in tiny house living in Atlanta, the movement is not without its obstacles. Zoning restrictions exist at the city, county and state levels, creating a tangled web of regulations that are not easy to navigate. “It’s a huge task, and it’s expensive,” Johnston says. Revising zoning and building codes to accommodate tiny houses will take a lot of time at every level of government, which will incur costs for feasibility studies to examine the issue. 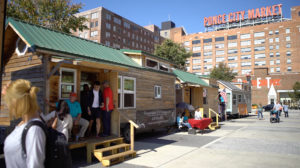 Part of the problem stems from the fact that tiny homes are made with wheels, and even though many owners install them on a foundation, homes on wheels don’t fit into any particular code very well, Bucciero says. “They’ve been lumped in with RVs.”

To combat that, micro-housing proponents are working to educate government officials and communities, as well as planning and building commissions, on exactly what is meant by “micro-housing” or “tiny homes.” “There are language barriers, so we have to be very clear in what we mean,” Bucciero says. “I think there’s a lot of interest, but there are so many ways to incorporate [micro-housing].”

To illustrate the many layers of incorporating tiny homes into local communities, Decatur has approved a tiny house ordinance, but those structures also have to meet the city’s building codes. Clarkston has a similar ordinance. “It’s really about educating people about the existence of these ordinances and these rules so that people can work within the existing guidelines and create new opportunities,” Bucciero says.

In an effort to streamline zoning ordinances, building codes and other regulations involving tiny homes, Johnston and Tiny House Atlanta have partnered with entities such as Southface, an organization in Old Fourth Ward that promotes sustainable development and green building.

The two organizations have worked with the Atlanta officials on a feasibility study on tiny homes and ways to implement micro-housing in the city limits. They also worked with Ryan Taylor Architects LLC of Vinings to submit an appendix of zoning rules and regulations for tiny homes on foundations to be defined by the state’s building code, and that document has moved through preliminary reviews and is now set for a final vote by the state Department of Community Affairs zoning and code committee in November. “Once the state approves the tiny house appendix, then we go to the counties,” Johnston says. “Once the counties adopt it, we’ve got to go to the cities. And once the cities adopt it, we’ve got to go to the local jurisdictions.”

Despite the challenges presented by zoning and code restrictions, Johnston welcomes the opportunity to educate both government officials and residents on the benefits of tiny house living. “I don’t see these as obstacles,” he says. “It’s taking the fear out of [tiny house living].”

In May, another step in combating the zoning confusion recently passed in Atlanta. Following a policy recommendation from the department of Planning’s Tiny House Feasibility Study, the City Council passed an ordinance allowing for an accessory dwelling unit in areas already zoned for duplexes. Per the study, incorporating this type of development could preserve Atlanta’s neighborhoods, especially considering the city population is expected to double over the next three decades. 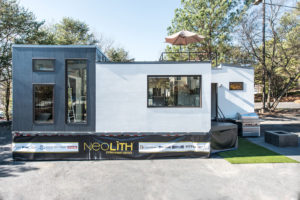 Jeffrey Bruce Baker and NeoLith collaborated on the clean-lined, sun-lit and stylish NeoLith Modern Tiny House that was displayed at Baker’s studio earlier this year.

A leading proponent of the ordinance was Councilman Kwanza Hall, whose district includes Inman Park, Midtown, Downtown, Poncey- Highland, Candler Park and Old Fourth Ward. “In Atlanta, there have been lots of big, single-family homes and lots of luxury apartment complexes built since the 2009 recession, but not much of anything else,” Hall says. “I believe we need to diversify our housing options, and tiny house is an important part of that. By allowing smaller, high-quality units as ‘accessory dwelling units,’ long-term homeowners can gain a stream of income [through tiny house rentals] and provide a place to live for less in our great neighborhoods. In some cases, I think allowing them will help long-time homeowners stay in the neighborhood even while real estate prices and taxes rise.”

Although there are no hard and fast rules on how tiny houses will affect the appearance of Atlanta’s neighborhoods, Hall doesn’t think they will have a negative impact, even in the historic areas of his district. “The zoning rules for the Inman Park Historic District have allowed for carriage houses for years, and my constituents have noted how much flexibility it has allowed their families,” Hall says. “Grandparents can come and have longer visits before they overstay their welcome, and recent college graduates don’t have to move back in with mom and dad if there is an extra space on the property. Inman Park residents feel that allowing accessory dwelling units has been an important part of the character of their neighborhood, and neighbors in Candler Park, Poncey-Highland and Old Fourth Ward are glad to have the opportunity.”

Bringing tiny homes to Atlanta continues to take time, but Johnston is thrilled with the progress that has been made thus far. “This past year has been phenomenal,” he says. “We’re making the state look at its [building code] appendix. I think that’s huge. We had the feasibility study with the city. The tiny house movement in Atlanta is making a direct, positive impact and challenging the city to look at housing in different ways than just ‘normal’ housing options. It is helping people, helping cities, helping groups understand that space can be utilized in many different ways.” 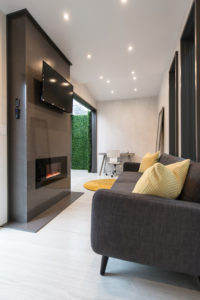 Jeffrey Bruce Baker and NeoLith collaborated on the clean-lined, sun-lit and stylish NeoLith Modern Tiny House that was displayed at Baker’s studio earlier this year.

The work done thus far to ease the way for widespread micro-housing in Atlanta is just the first of many steps. “If we get the appendix passed with the state, that’s a huge win,” Johnston says. “Then we regroup and work on our dogand- pony show and show cities and counties how to embrace this. [Tiny houses] are not one-offs by themselves, but they are added to a bigger development [possibly as one component of existing communities or as stand-alone communities].”

Regardless of what lies ahead, Johnston says he is encouraged by the response Tiny House Atlanta is receiving. “It’s exciting to hear people say, ‘You know what? I have a good life, but I just need to downsize,’” Johnston says. “We want to be able to give them those options.”