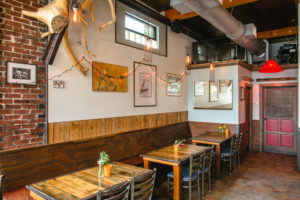 Entering Bantam Pub for the first time feels like walking into a party where you don’t know anyone. As you step through the door of the jovial Old Fourth Ward eatery, you arrive at the bar, only to find there’s no hostess stand. Though by the second visit you’ll have the hang of it, as a newcomer it’s not immediately obvious which folks are customers and which are staffers. No T-shirts, aprons or even a standard color scheme distinguish the servers, so unless you happen to spot someone carrying a tray of food, it can be hard to guess who works there and who doesn’t.

“Do we just sit anywhere we want?” I asked the room in general on my first visit. Somebody nodded yes, so my husband and I headed for the patio, where the noise level was a bit lower. Depending on the weather, you might also enjoy the tables out front and even up the hill. 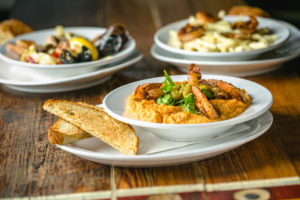 The shrimp and grits platter is a popular brunch choice.

Our visit was spurred by a friend’s recommendation: “I live right across from Bantam Pub and have had a few good meals and drinks there,” she’d said of what’s become a neighborhood hub since it opened in 2013. “It’s cozy in the cold months.”

Once we’d grabbed a table, our server appeared as if out of nowhere to deliver menus, which feature familiar options such as barbecue, burgers, pasta, sandwiches, soups, salads and, for weekend brunch, omelets, biscuits and more. The full-service bar offers 10 beers on tap plus a variety of canned and bottled beers, as well as wine and cocktails.

When the server arrived with our drinks and set them on the table, my Dark and Slurry cocktail splashed up over the rim. I asked for a napkin, and my husband asked for a glass for his bottle of beer, and our waitress disappeared. 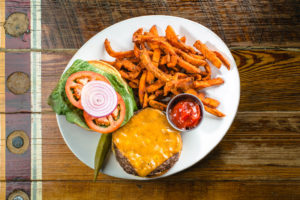 The Angus burger with sweet potato fries is a Bantam best seller.

After waiting for what felt like a reasonable amount of time for her to return, I got up and walked to the bar, where I grabbed a napkin from the stack and asked a bartender for a glass, which she handed over with a smile. This laid-back sort of make-yourself-at-home attitude gives Bantam Pub a block party vibe.

The servers aren’t quite inattentive, though they don’t hover either. The Dark and Slurry is comprised of “Kraken rum, ginger beer, sour and lime topped with Sweetarts.” Mine arrived without the candy topping, but I didn’t miss it. I’d anticipated a tall, bubbly quaff, but the short, stocky sipper was packed with such strong rum flavor, I felt transported to the Caribbean.

Owner Tim Lance describes Bantam Pub as a gastropub. “Some may consider us a dive bar, but the food elevates us beyond that,” he says. I’d rank it somewhere in the middle. The fare is well prepared and not greasy, but the recipes are familiar, straightforward and simple. If you can cook, you could probably replicate most of the dishes here at home. 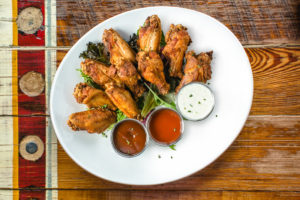 The smoked bourbon wings come with a trio of delicious dipping sauces.

The smoked bourbon wings are a menu standout. Crispy and hot, moist but not oily, flavorful yet enhanced by the trio of dipping sauces (barbecue, hot sauce, blue cheese or ranch), they’re lip-licking yummy. As we nibbled, our server delivered a small cup of Sweetarts candies while muttering, “Forgot these.” My husband gobbled them down as an intermezzo.

The pub’s best sellers include the lamb burger, Angus burger and Bantam chicken sandwich. The former was cooked to order and topped with a sweet combination of feta, tomato-chile marmalade and crunchy micro onions served on focaccia tomato bread. The Angus burger was juicy and just the sort you’d hope to find at any party. Sadly, we were too stuffed to try the chicken. 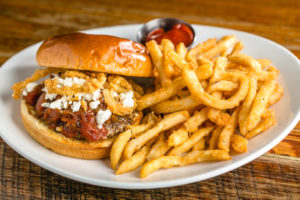 As if the lamb burger wasn’t tasty enough, it arrives topped with feta cheese, a tomato-chile marmalade and fried onions.

All of the sandwiches are served with fries (white or sweet), but the menu fails to warn that they’re battered. It’s a nice surprise if you happen to like battered fries, but if not, you can swap them out for a veggie or side salad. The warm and comforting mac and cheese seems inspired by Alfredo with its white sauce. Gobble it down plain or top it with your choice of blackened shrimp, salmon, hanger steak or grilled chicken.

On weekends, brunch is served until 3 p.m. The shrimp and grits platter features stone ground grits accented with tails-on blackened shrimp and a sprinkling of shredded cheddar. Absent sauce, it was a bit dry. Corned beef hash is served as a loaf you can top with eggs served any style. Order them over-easy or medium and you can use the yolks as a sauce to help mitigate the hash’s inherent saltiness.

As for the atmosphere, Bantam weighs in at just 800 square feet. “When we registered the pub, we were told it’s the smallest square footage pub in Atlanta,” says Lance. “I was originally going to call it Ralph’s, because it’s on Ralph McGill and my father’s name is Ralph, but that didn’t seem to do it justice.” He settled instead on Bantam, meaning diminutive. The small space houses one TV that’s only turned on for big events such as the World Cup. The close quarters and limited distractions encourage socializing. “We’ve had tons of people meet their life mate or spouse here,” brags Lance. 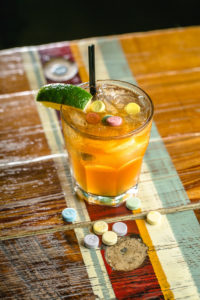 The Dark and Slurry rum cocktail, spiked with Sweetarts candies, will transport you to the islands.

At Bantam, you might arrive knowing no one, but leave with a new friend.

Bottom Line: Bantam Pub serves fresh preparations of comfort food at fair prices. The service is relaxed and casual, and a neighborly vibe reverberates from the bar onto the dog-friendly patio.

The High Gets Higher