Steven Satterfield is an Atlanta culinary darling known for being a whiz with vegetables and a champion of the farm to table movement. Over the past few years, he’s gained celeb status for his restaurant, Miller Union, and the release of his 2015 cookbook, Root to Leaf. Last spring, he won the James Beard Award for Best Chef: Southeast. (That’s like an Oscar in the food world.) Between running Miller Union and serving on the board of Slow Food Atlanta, Satterfield doesn’t have much free time, so each off-duty meal has to count. 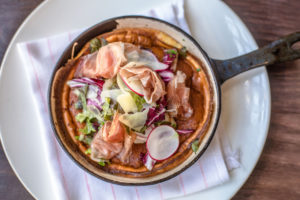 Why he loves it: The food is always very creative and fresh, and I recognize a lot of the ingredients because we buy from many of the same farms. I can walk there from my house, and it’s always comfortable and relaxed.

Favorite dish: The one thing I’ve had recently for brunch was a Dutch baby pancake with blueberries baked in and topped with bitter greens, country ham and shaved parmesan. I had it one Sunday and went back and ordered it again the following Sunday because I could not stop thinking about how good it was.

A Taste of Naples