Put a Sock on It

Stefan Lewinger and Futhum Tewolde didn’t grow up dreaming about making socks, but for the two founders of Sock Fancy, it was inevitable that they’d go into business together one day. They grew up in the same neighborhood in Athens and have known each other since they were 6 years old. 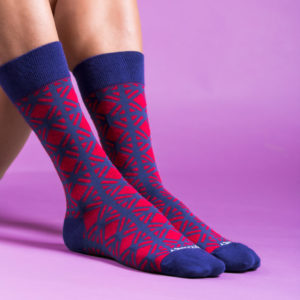 “I would say socks were not really in the Rolodex at the time, but we had always kind of been each other’s springboard, if you will,” says Lewinger. Adds Tewolde: “When we were younger, we would have these small businesses like dog walking in our neighborhood.” In 2013, they aimed bigger and launched Sock Fancy, a subscription company based in Cabbagetown.

Sock Fancy customers looking to up their footwear game can choose among several subscription options, including one pair per month for $11 and two pairs or a six pack for $9.50 each. Options include crew, no-shows or a mix. Each time you receive a subscription box, the sock pattern is a surprise, but it’s guaranteed to have a colorful, eye-catching pattern.

“Our main goal early on was to change the way people thought about buying socks,” explains Lewinger. “And the best way for us to do that was through the subscription method, which at the time was pretty new to retail.” Companies such as Dollar Shave Club had launched, but Lewinger and Tewolde found that when it came to the mundane task of purchasing socks, most shoppers still had to go to big-box or department stores and stand in line. “We saw there was a lot of compromise involved in the industry at the time,” says Lewinger, “and we felt like we could make not only a really great pair of socks—something that’s fun to wear, really durable, really soft—but that the subscription model makes the experience way more useful and way more exciting.” 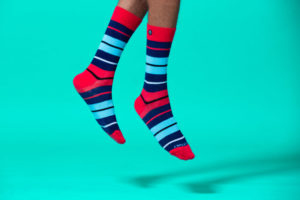 The idea came to them while they were roommates in Virginia- Highland. Lewinger had just graduated from the University of Georgia, and Tewolde was wrapping up at Georgia State University. They drew inspiration for their socks’ patterns from life itself. Explains Lewinger: “I was standing behind some dude at El Mexicano who had on a really loud shirt, and I figured some iteration of that would be an awesome sock.”

Their house became their headquarters, and the pingpong table in the dining room became their warehouse fulfillment center, with boxes stacked to the ceiling. “We were like persona non grata at the post office in Virginia- Highland,” says Tewolde, referring to their frequent drop-offs. “They still hate us,” laughs Lewinger. USPS’s chagrin aside, Sock Fancy grew out of the house and into a brick-and-mortar location on Memorial Drive that serves as a warehouse, office and storefront. They’ve even collaborated with brands such as Chick-fil-A and King of Pops for customized socks and have created versions for events such as the Discovery Channel’s Shark Week.

Lewinger and Tewolde are excited for the things to come. “We’re going to be opening up the top of the funnel a little more,” says Lewinger. “People who would never subscribe to anything in their life, even if it was going to save their life, we’re going to open it up to them to be able to purchase one-off unique experiences, whether that’s packs or special editions, that kind of stuff.” For now, those hesitant to commit to a subscription can swing by their storefront and purchase some snazzy socks to add to their wardrobes.