When chandelier designer Elizabeth Martin of Sullivan + Phenix decided to move back to Atlanta after living in New York City for two years, she searched for a place reminiscent of NYC’s fast-paced lifestyle.

“I wanted to have a lot going on because I’m used to a city,” she says. Martin found what she was looking for in The Flats at Ponce City Market in Old Fourth Ward. The clean, modern design of her unit and the historic building that is PCM come together to create an Atlanta apartment at home in one of the largest adaptive uses of a building in the city. 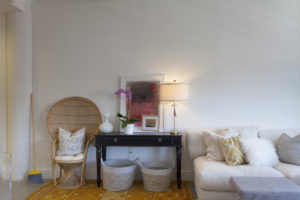 The Flats are housed in the former Sears, Roebuck & Co. building that was constructed in 1926. After acquiring the property in 2011, real estate operator Jamestown began construction on the adaptive reuse and physical restoration of the building in 2013. A year later, Ponce City Market and The Flats opened for businesses and residents. In April 2016, Martin moved in and set about turning the 655-square-foot space into her home. Martin loves the exposed brick from the original building and the big iron windows that allow light to spill into the flat. Because of its cozy size, she didn’t try to do too much interior decorating, instead preferring a minimalist approach. “I went the serene route with a few pops of color. Pink is definitely my favorite, but I tried not to use too much of it,” she says. “It’s a little bit Bohemian-chic, not at all traditional. That’s what I was going for.” 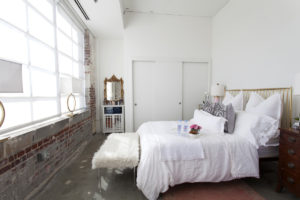 Martin achieved her look by combining new pieces with hand-me down furnishings from her family. For instance, she purchased rugs for her den and bedroom while traveling in Morocco. “I went right before moving back to Atlanta, so I bought those to cover the concrete floors,” she says. For the couches, she added color bursts with a variety of pillows picked up at a mix of contemporary home decor shops. The dining room rug came from a boutique home store in Columbus, Ga.; the dining table was purchased at West Elm; and the gold and marble lamps in the den were found at Anthropologie. flat’s kitchen herself, it also adds texture to the space, thanks to Tribeca wood cabinetry, quartz countertops, a tiled backsplash and stainless steel appliances. Along with the open floor plan, the kitchen lends itself to entertaining, which Martin enjoys. 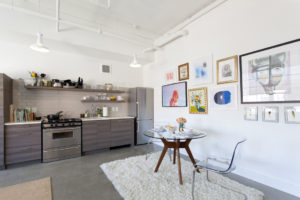 In fact, there’s not much about living in her flat that Martin doesn’t like. “It was like a side of Atlanta I hadn’t seen,” she says of the community. “It’s like one big family. Everyone is always in the best mood, the energy is so good and there are dogs everywhere.” That’s good news for Martin’s French bulldog, Sophie. Residents of The Flats also enjoy such amenities as wireless internet, access to two fitness centers, secured bike parking and covered parking.

With shopping and dining just steps away and the BeltLine right outside, Martin doesn’t have to travel far for entertainment, which is a good thing for someone who’s used to New York City’s busy lifestyle. Thankfully, though, The Flats offer a generous dose of Southern hospitality, making it an ideal place for Martin to call home. 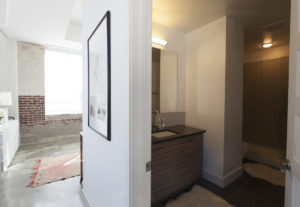