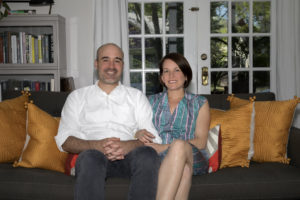 Four years ago, Thomas DiNatale and his wife, Allison Sall, made the move from Brooklyn, N.Y., to Inman Park, where they settled into an apartment. However, not long after the birth of their now 4-year-old son, Theo, they knew they wanted a house with more space. Two years ago, they searched Inman Park and the surrounding neighborhoods before finding what they wanted in Poncey-Highland: a circa-1926 house with a good-sized yard.

DiNatale and Sall, who both work for a venture builder of retail start-ups, agree that a major selling point for the house was its location. “Walkability was very important to us,” Sall says. “Coming from Brooklyn, it was one of our [key factors]. One of our markers was, ‘If we run out of coffee, how quickly can we go and get a cup?’ So we [wanted a place within walking distance of shopping]. And here it provides the best of all worlds. Not only are there places to walk to in Virginia-Highland and Inman Park, but we’re also really close to the BeltLine, the Freedom Trail and The Carter Center and the farmers market there on Saturdays. And there’s a playground just around the corner.”

Other deciding factors included the layout and the covered front porch. “We liked the flow of the house, how you could really move through the rooms,” says Sall. “It felt just wonderful in that regard.” But, DiNatale, adds, “The covered porch sold us on it. It’s great out here. And sometimes you’ll get that breeze, and it’ll go all the way through [the house]. One of the best things about the renovation was that connection from [the porch] directly to the kitchen through that doorway.” 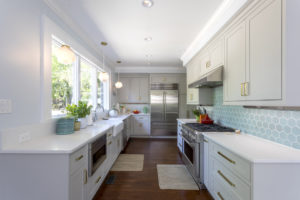 The couple redesigned the kitchen to improve the flow and take advantage of the backyard view.

Of course, that “connection” needed some help. When DiNatale and Sall bought the house, the kitchen broke up not only the cross ventilation with a blocked doorway (essentially a pass-through window), but also the entire flow of the house. As part of the renovation, the couple redesigned the entire kitchen with Brad Cruickshank, owner of Cruickshank Remodeling in Morningside. Initially, the back wall of the kitchen included a single exterior door, as well as double and single windows. The stove also sat on that back wall. DiNatale and Sall traded in the single exit for double doors and exchanged both windows for one large picture window. They also moved the stove to the opposite wall and installed a Kohler farmhouse sink under the picture window. The refrigerator was also relocated to a side wall next to the stove’s new location.

Thanks to a new Sub-Zero refrigerator, GE Monogram oven and dishwasher and Sharp microwave, the workspace is much more conducive to cooking, something DiNatale enjoys quite often. Pendant lights from Oregon-based Schoolhouse Electric and tile from Heath Ceramics provide beautiful yet understated finishing touches to the space.

The small den adjacent to the kitchen also received a makeover. The original space had an awkward tray ceiling that DiNatale and Sall replaced with a smooth ceiling. Speaking of awkward angles, the couple will be the first to tell you there are some uneven lines and  spaces throughout the entire home. “The whole house is crooked,” Sall says. “It’s really hard to get a straight line, so there are a lot of visual tricks to make it feel level.” Simply put, DiNatale says, “If you drop a ball, expect to go chasing after it.” 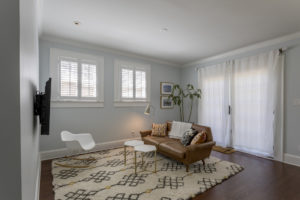 An angled ceiling was replaced with a smooth one in the den.

Although most visitors don’t notice these imperfections, DiNatale and Sall point out quite a few. For instance, the door to the guest bedroom slopes down at the top. Also, if you look at the baseboards in some of the rooms, they look uneven where they meet the floor. In fact, the floors were uneven in several parts of the house, so the couple leveled them off. You can see the height difference between the hall floor and the downstairs bathroom, which is separated by a slope in the bathroom door casing. The couple evened them up.

These quirks are just some of the home’s charms that make both DiNatale and Sall laugh. They attribute the oddities to the various previous homeowners who did their own renovation projects through the years. “It was all very DIY, like the way the wires [were run throughout the house],” DiNatale says. “And I think it was a duplex at some point,” he adds, referring to the home’s two front doors, a deadbolt on the guest bedroom door and an apparent relocation of the staircase.

“There’s a lot of [patchwork in it],” DiNatale says. “But that’s one of the reasons why we bought it.  We wanted something we could put our own spin on.” 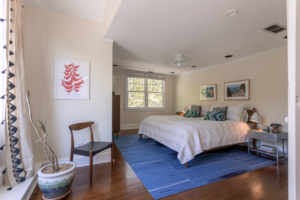 The couple used art and accessories to add pops of color throughout the home.

Now, as part of their own renovation and decorating, DiNatale and Sall have added charming touches to make the house a home. For instance, using white as a backdrop, they’ve added pops of color and whimsy with art. One example is the greens and golds found in the print depicting the natural history of the “dragon’s teeth” flower above the fireplace the couple purchased from 1stdibs, an online marketplace the couple worked with when they owned their own design firm before it merged with their current employer. Other examples include the black and red digital print in the dining room of a photograph of David Bowie taken by the late star’s personal photographer, as well as many framed photographs taken by the couple during their travels.

Another quirky touch is the “coffee table” in the living room that is actually a bricklayer’s cart. The couple purchased it from a previous tenant of the office space they rented for their design firm. And upstairs, there is the neon “Be the cool girl” sign, which served as the firm’s motto and was a phrase Sall used to recite to herself when she got nervous. The couple had the sign made in 2013 to celebrate their business’s one-year anniversary. 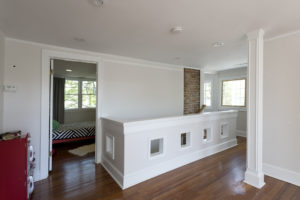 The exposed brick is another of the home’s quirky features.

Creating the home was “a labor of love,” says Sall, who describes it as eclectic modern. DiNatale says the kitchen is his favorite spot, where he can indulge in the fun of cooking while “those windows let in all that light.” But there could be more change to come. “I don’t think a renovation is ever complete,” Sall says. “Our hope is to update as we go.”