Dedicated to the Design

An Ansley Park home is remodeled with grace, humor and skill, thanks to the Cruickshank family. 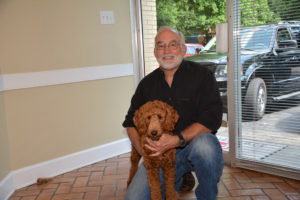 Brad Cruickshank with his dog, Pepper.

If there’s one sector of business Atlanta is known nationwide for, it’s the home market and all that comes with it: real estate, interiors, architecture and remodeling.

Brad Cruickshank is well known around Atlanta as the President of Cruickshank Remodeling; he’s also the chairman of the Atlanta Chapter of the National Association of the Remodeling Industry and has won countless awards for his remodeling work throughout the Atlanta area. But tackling his personal property proved to be slightly more intensive—and humorous—than he first imagined.

Cruickshank, together with his Atlanta-native wife, Cheryl, knew he needed to start looking for a bigger home when his second child was on her way in 1991. In May of that year, a neighbor Realtor hinted that a house was going up for sale in their existing neighborhood of Ansley Park, and the couple snatched the property up and moved their two young girls into the house to begin immediate renovations.

The previous owner and his late wife were only the third generation to occupy the 1921 Dutch Colonial, and the Cruickshanks jumped at the chance to have a historic home in their current neighborhood— one of the most sought-after neighborhoods in the metro area. 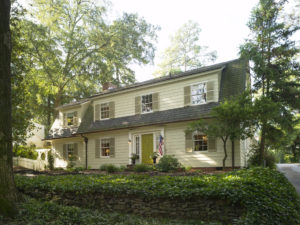 The exterior of the 1921 Dutch Colonial.

“The elderly seller, Ewing Miles, knew a lot about the provenance of the house,” says Cruickshank. “He told us it had been built for a man who worked for W.E. Brown Decorating Company.”

The Cruickshanks wanted to honor the history of the house but to also modernize it for a family of four. It proved to be quite the undertaking, given the eccentricities of the house’s current state.

“The kitchen was a refrigerator and a stove in a room with very few cabinets, and the butler’s pantry had been turned into a shower for the aging Mr. Miles,” says Cruickshank. “The house had steam radiators and a dirt basement floor. The Miles’ daughter and son-in-law were living upstairs, with Mr. Miles downstairs. They had to enter through a window they converted with an outdoor metal spiral staircase.”

But the Cruickshanks saw an opportunity where others might have seen calamity. “It’s the kind of house I love to get because we weren’t going to pay for anyone’s poorly done remodel,” Cruickshank says with a chuckle. 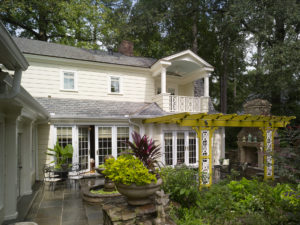 Glass walls at the rear of the house overlook the patio and afford views of the garden.

The work involved three massive phases of renovations on the house, with an initial five-month remodel, an addition—Brad’s “nights and weekends project for several years, the family got tired of me banging away out there every Saturday and Sunday”— and then a heavy-duty third remodel.

The first renovation covered all the basics for rooms that fit the family’s lifestyle needs. “We added a bath, remodeled and re-plumbed a bath, and we needed a new kitchen,” he says. “But we wanted to change the floor plan very little.”

Outside was a different matter. “Our vision for the house was an L-shape of glass walls around an outdoor patio space overlooking the garden,” recalls Cruickshank. Most of the surface water was pooling dangerously around the foundation and up into the dirt floor basement, which required regrading the yard and adding a stone retaining wall for structure and correct drainage. “We also brought in several huge boulders that we placed around the perimeter of the back yard to provide some structure and sense of permanence to the plantings.” 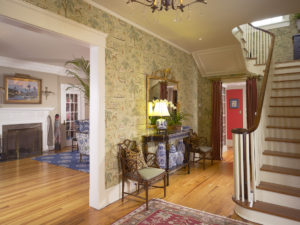 Print mixing factors into the design scheme of the home’s foyer.

The second, years-long phase encompassed putting a sizable addition on the back of the property, including a family room, a first-floor bathroom, Cheryl’s home office, a guest room and a garage with a study over it. But that wasn’t as daunting as the eight-month-long third phase, which had the second story of the house propped up to rebuild the living room and dig out a new basement under the house and the addition.

“Working out how to get the digging equipment into the house to dig it out, keeping water out of the house, keeping the master bedroom propped up—it was by far the hardest part of the project. The living room is the biggest room, and there was significant termite damage in the floor joists and not a lot of room to work underneath. I had to crawl in there and put some beams in for support. It got wearisome,” he admits. 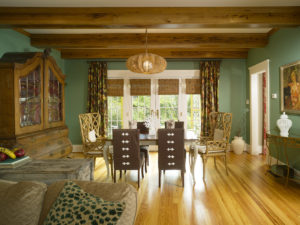 The use of natural wood and green paint is continued in a dining nook just off of the family room.

But through it all, there were elements of surprise and humor, whether from the Cruickshanks themselves or the families before them. “We ran kind of long on the construction schedule,” Cruickshank recalls. “My girls, now grown, think fondly of the first night we spent in the house in May of 1995. The polyurethane was still drying on the first floor, and to get to the bedrooms we had to climb up an extension ladder to the second floor. They asked if we were going to do that every night.”

The previous owners revealed a mischievous, unconventional style as the remodel unfolded. “Betty Hammond Miles was an amateur interior designer and had a great sense of humor with the kitchen make up such as it was,” Cruickshank says. “She also painted the baseboards black, and in the corners of the room she painted spider webs and a rat or two. I actually found a dead rat in the wall when we began construction!”

When they went to peel the wallpaper from the dining room, they found a little bit of graffiti left over, too, that said: “Wallpaper hung by Barney Bishop, 1921. It’s hot as forty hells in here, believe me.” 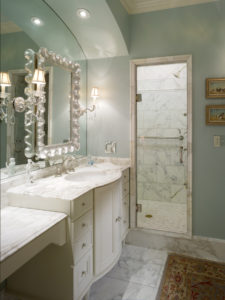 The discoveries weren’t limited to the first floor, either. “When we moved into the house, the attic had several trunks of items that had been left behind. We really enjoyed sorting through those,” says Cruickshank. “We found a ticket to the premiere of ‘Gone with the Wind,’ a collection of old greeting cards, a WWI uniform. They all gave us great insight into the house.”

For the interior, the couple was able to bring the outdoors inside, something they both love. “The wood in the new family room is Pecky Cypress,” explains Cruickshank. “Cheryl and I both like it. It’s unusual due to the irregular channels in the wood created by a naturally occurring fungus that dies once the wood is cut.”

In the house are three oil paintings by Massachusetts artist Robert C. Gruppé, including one that hangs over the mantel in the living room. The color green is a common theme throughout, reflective of Cheryl’s love for the color in both interiors and nature. 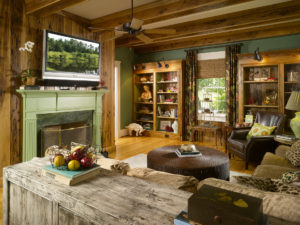 The walls in the Cruickshanks’ family room are made from Pecky Cypress. Green paint lends an air of natural earthiness and is a nod to Cheryl’s love of nature.

After 20 years of living in the house, the Cruickshanks have had plenty of time to enjoy the fruits of their initial labors. As for whether or not the renovation was worth it, Cruickshank has only this to say: “Anyone can have sheetrock. We like old houses with character.”