Former house flippers use their expertise to transform a 1920s bungalow 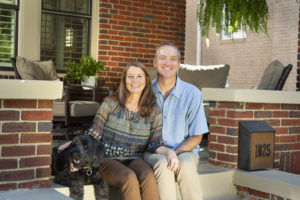 Empty nesters Julie and Tripp Eskridge downsized to a home from which they can walk to church, the hair salon and even the post office.

Julie and Tripp Eskridge had a successful, four year run at house flipping. Although they got out of their side business in 2008 during the housing crisis, they held onto their penchant for home renovation. So when their two children—son Daniel and daughter Kristen—left the nest, the couple decided to downsize by transforming a Virginia-Highland bungalow into a warm and welcoming home for two. This December, their finished abode will be featured on the Virginia- Highland Tour of Homes.

“We’ve volunteered with the Tour of Homes for years and thought it was finally time to volunteer our home,” Julie says. “We’re excited to invite everyone in.”

Prior to taking up residence in town, Julie and Tripp spent 12 years in a 6,000-square-foot home in Alpharetta. In addition to downsizing, they also wanted to cut down Tripp’s commute time into Buckhead, where he works as managing director of project management for CBRE. The couple looked at various neighborhoods, but Julie had dreamed of living in Morningside/Virginia- Highland since she moved to Atlanta in the 1980s. 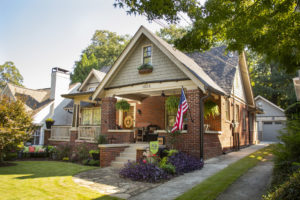 The Eskridges love to hang out on the expanded front porch of their storybook Virginia-Highland home.

For eight months, they looked for a flat-lot home with a front porch in the area. In October 2014, they got lucky, winning the bid on a 1929 residence on Virginia Avenue that was in need of some T.L.C. “It was such a great price,” Julie recalls. “There were six offers immediately, and 10 waiting behind it. We said, ‘We want this house; what do we need to do to get it?’”

The Eskridges offered above asking price, and once the contracts were signed, the real work began. They contracted Brian Patterson Designs to develop plans and then gutted the four-bedroom, 2.5-bathroom residence’s 2,100-square-foot interior, converting the closed floor plan into an open concept with five bedrooms and 3.5 bathrooms. Although they kept the original footprint, the dining room and kitchen switched locations, the sitting parlor on the main level became a master suite, the fireplace and front door were relocated and the back deck became a spacious, screened-in porch. They also dug out 3 feet from the basement to make it livable. 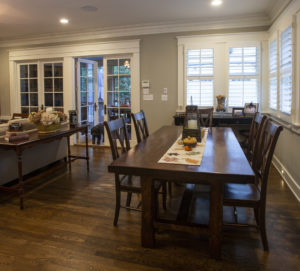 Located where the kitchen used to be, the open dining room offers a view outdoors through plantation shutters.

“When we moved here we said, ‘We don’t want one room that is not used every single day on the main floor’ so we eliminated wasted spaces and made the most of every square foot.” Julie says.

Like many renovations, the Eskridges’ project ran into its fair share of challenges and delays. A portion of the century-old hardwoods were ruined by a washer hose flood, the antique plaster was damaged by an overly energetic electrician and the basement flooded several times. During the early stages of the renovation, Julie and Tripp remained in Alpharetta, but in August 2015 they sold their suburban home and moved into a 400-square-foot Airbnb near Dark Horse Tavern so they could keep a close eye on the project.

“We were supposed to be there six weeks, and we were there four months,” Julie says. “In December, three days before Christmas, I said, ‘I don’t care what is done or not; I want everything moved into our house. Get it out of the pods and get it into the house.’”

The renovation, including the transformation of the “mud pit of a backyard” and addition of a detached garage, was finally complete by June 2016. It was a long time to wait, but the Eskridges’ inviting VaHi retreat turned out even better than they could have imagined. The kitchen, done in off-white cabinets, brushed bronze hardware and quartz countertops, features a copper farm sink and glass mosaic tile backsplash that led Julie’s design inspiration. A few steps away, the dark stained oak floors lead into the dining and living space, where a stacked-stone fireplace anchors a sitting area of traditional furnishings from the Eskridges’ previous home, consignment and estate sales and even a street curb. 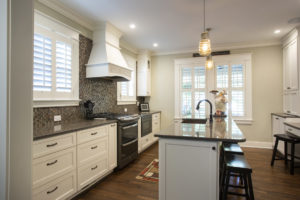 Julie outfitted her kitchen with lots of drawers for storage and pendant light fixtures from VaHi’s Urban Cottage.

Uplifting sayings, religious crosses and one of a- kind antiques—including a foyer display of old electronics—create a cozy, feels-like-home environment ideal for a rainy day spent indoors. French doors in the living room open up to the screened back porch with a wood-burning fireplace and furnishings from their previous basement and kitchen breakfast table.

“That is our happy place for sure,” Julie says. “We love to watch football games and movies with the fireplace going and heated blankets.”

The main level also includes a powder room and the master bedroom, a private little enclave with a bathroom and walk-in closet that offers just enough space for the two of them. “This is all you need,” Julie says of her quaint bedroom with furnishings from Pottery Barn, HomeGoods and The Salvation Army. “Our entire main level could fit inside the former Alpharetta house master bedroom suite … it was way too big.” 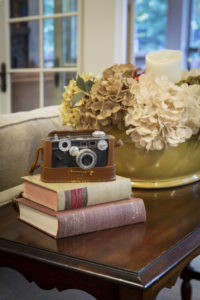 Upstairs, Kristen’s room and Julie’s office are connected via a renovated Jack-and-Jill bathroom done in subway tile and ceramic wood tile floors. A sunlit guest room is adorned with Philip Anthony Moose artworks that once belonged to Tripp’s grandmother. When Daniel is home, he retreats to his masculine basement bedroom. The subterranean level with shiplap, rock and brick walls is also home to Tripp’s workspace and collection of wine, vintage records and varied antiques, from a bocce ball set to a typewriter.

One of the home’s most interesting relics is the prayer book for WWII Jewish soldiers the Eskridges discovered during the renovation. Turns out the three generations who lived in the home prior were all members of the same family and played a role in the founding of the William Breman Jewish Home in 1951. The Eskridges have kept spirituality and a sense of community alive in the home. Prior to adding sheetrock to the walls, they invited friends and family to write their favorite Bible verses all over the interior surfaces. The home also hosts monthly church group gatherings and a neighborhood “empty nesters club.”

“We love the front porch, too, because when people walk by we say, ‘Come on up,’” Julie says of the outdoor space that was enlarged to function as a social gathering spot for neighbors.

The Eskridges had many design aspirations for their home, but their real goal was to create a welcoming abode for others to enjoy. This December, thousands of Tour of Home attendees will get to do just that. 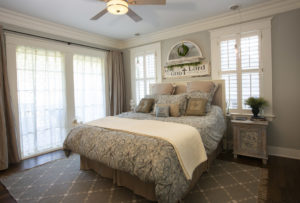 Although much smaller than their previous bedroom, the Eskridges love their cozy master on main.