A Helping Of History

When you select the right spot, going out for a meal and a drink can be a cultural experience, offering a chance to drink in history. Atkins Park Restaurant and Bar may appear an unassuming 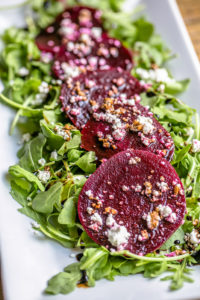 watering hole, but it has been a cornerstone of Virginia-Highland for nearly 100 years.

Whether you enter through the front door or via the parking lot’s back entrance, the space has a rathskeller vibe. It’s a little beer-scented and dimly lit, with weathered, wooden booths, tables and trim. The space is broken into two parts: the pub side, surrounding a long bar, and a more classic dining room, well-lit with golden wood tones. It’s a place where family friendly dining and late-night eating co-exist.

Overhead, copper ceiling tiles are original, and below your feet in the pub, the tile floor dates back 95 years to the first business occupants, Atkins Park Delicatessen. It’s been 95 years since cousins Morris Franco and Reuben Piha raised and added a floor underneath a home to create a deli. This was one of the first Victorian homes built in the planned community established for its convenience to the Nine-Mile Circle streetcar line. The simple deli is touted as possessing Atlanta’s first liquor license issued after Prohibition, something that probably kept it going until the early ’80s, when the surrounding neighborhood was in a state of decline. “Deli” dropped from the name, as Atkins Park became a pub. 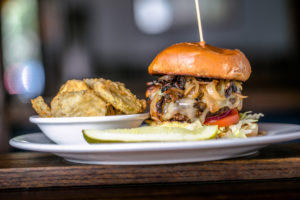 The popular Bruno burger, served on a griddled bun, is topped with melted provolone and sherried onions and mushrooms.

Neighborhood pubs where pedigree is checked at the door are a dying breed, but continual operation for almost 100 years is evidence of Atkins Park’s place in the community. Patrons from all backgrounds have found solace here for decades, ordering “the usual,” maybe a griddled, grass-fed burger with crusty edges, melted provolone, caramelized onion, and Sherry-sautéed mushrooms on a buttery, grilled bun. This burger set-up, the only listed burger aside from the build-your-own section, is called the Bruno Burger, named for Warren Bruno, who kept the license going, purchased the building in 1983. Bruno, who died in 2012, was part of the social fabric that made Va-Hi what it is today, revitalizing the neighborhood, creating civic and business associations, and envisioning festivals such as Summerfest.

Much like he cleaned up the community, Bruno transformed a derelict alleyway into a comfy patio, a tranquil space where regulars of 30 years now enjoy brunch. General Manager Nate Strahan, who began as a server, talks of couples who started their dating careers on the bar side, then moved to the restaurant side after marrying and having kids, and now meet their grown children in the cozy former alley. 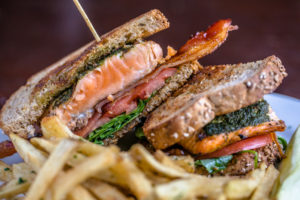 The salmon BLT puts a twist on an old favorite.

The menu by chef Alvaro Bibiano is similarly comfortable and familiar, built on American classics with a Southern bent. In fact, there are two menus: an always-available pub-style list and one with more standard entrees. The lunch menu offers smaller portions at lower prices.

Here, it’s not all burgers and fries. Steak salad features sliced, grilled flank resting on romaine leaves with wild mushrooms, tomatoes, crumbles of rich bleu cheese and fried onion bits drizzled with bleu cheese dressing. You can easily lighten it up. Take a cue from the dressing served with salmon salad on arugula and switch to zingy lemon vinaigrette. Those hefty slices of grilled salmon are also great in the salmon BLT with toasted wheat bread interspersed with arugula, tomato, and thick and crisp bacon. The combination in the roasted beet salad is dazzling visually and texturally, with peppery arugula, tart goat cheese, tender smoky beets and bright balsamic. 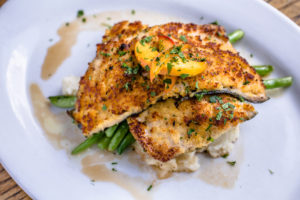 The dome of a Big Green Egg emitting smoke near the rear entrance hints at new smoked wings tossed in BBQ sauce. The smoke flavors the juicy meat, but I much prefer the confit wings, shatteringly crisp and indulgently savory due to frying in duck fat. Chef Bibiano also uses the Egg to smoke a prime rib loin that’s served thinly sliced on a hoagie roll with earthy Gruyère, caramelized onions and a slightly biting horseradish cream. He saves the au jus for dipping.

The long cocktail counter, lingering aroma of smoke and music make this hangout feel more like a bar, but the entrees are more sophisticated than you might expect. Sourcing of local ingredients really shows in a tangy dish of plump, wild Georgia shrimp over creamy North Georgia grits. Shrimp are pan finished with garlic, red peppers and onions in sherry. North Georgia trout is lightly crusted in cornmeal, browned but flaky with homey mashed potatoes and crunchy, garlicky green beans. (I could’ve done without the bourbon brown-butter apples, but then again, they are like free dessert.) The biggest seller is Southern fried chicken, a Sunday dinner approach served with creamed peppery gravy, mac and cheese and green beans. 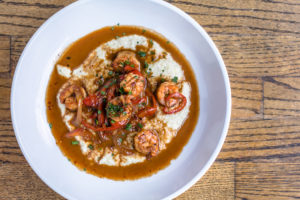 It’s difficult not to fill up on appetizers of stout-dipped soft pretzels, chewy and dusted with Chiclet-size flecks of salt. Pan-fired crab cakes—loosely packed and generously meaty— are brilliant with a whole-grain mustard cream. Guacamole is heavily and pleasantly spiced with fresh jalapeños, and the chips arrive almost too hot to handle. Wash down the hot chips, cool guac and spicy flavors with the beer of your choice.

Seventeen taps offer a wide variety of local and international brews. There isn’t a dedicated cocktail list, but bartenders, such as the adorable Maxine, weren’t stumped by any classics I threw at them. Take a second to look up when you’re near the bar—above it is a stained-glass phoenix rising, an emblem for Atlanta as well as Virginia -Highland. 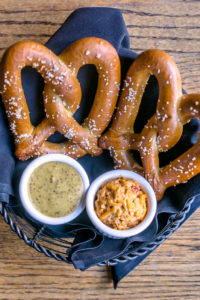 Atkins Park is open 365 days a year, a testament to its place in the community. It’s a place of refuge Friday after work, Christmas day or during one of Atlanta’s freak snowstorms when everything else is closed. “Authentic” is a word that is thrown around way too much, but here, it’s an apt description. When you order a burger, it comes with a dill pickle wedge, just the way a cold sandwich came 95 years ago in the same space. What’s more authentic than that?