How far would you go to learn to make real Italian pizza? Stephen de Haan and Greg Grant apprenticed themselves to Pizzeria Mattozzi (established in 1830) and Pizzeria Da Attilio in Naples, Italy, for two months earlier this year, and earned certification from the Association of True Napoletana Pizza.

Their new eatery, Amalfi Pizza, located on the second floor of the downtown building that once housed Dailey’s Restaurant & Bar, opened in September with a limited pizza menu, but appetizers, salads, pasta dishes and original desserts have been added since. 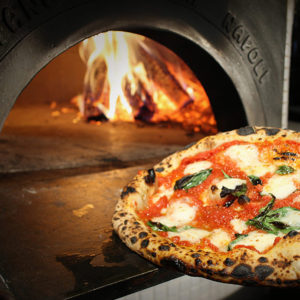 “I’ve always been passionate about pizza, and when I walked into the entrance of the old Dailey’s building, the space inspired me. I was transported to Italy,” says de Haan.

Grant and de Haan had been looking for a new location in which to open another 1920s speakeasy and cigar lounge—a new venture after closing their Andrews Entertainment District in Buckhead. “We wanted to be downtown because of the enormous growth and investment this area has seen,” says de Haan. “We ran across the Dailey’s building and fell in love with it.”

The two-story, 12,000-squarefoot building also afforded the duo space in which to open their new Red Phone Booth speakeasy that occupies the ground floor.

The owners spent nine months renovating the building. “We have been peeling away the layers to get to the original heart pine floors, brick walls and massive wood beams,” de Haan says. Patrons of the new Red Phone Booth will find familiar elements from Buckhead’s Prohibition, from the secret-number, antique phone booth entry to rare liquors and unusual drink flavorings. There are more than 100 brands of premium and hand-rolled cigars in the expanded 18-foot-long walk-in humidor. New are the high ceilings, and a much-improved ventilation system.

For Amalfi, they imported two 6,000-pound, wood-burning brick ovens capable of cooking a pizza at 900 degrees in about a minute. “We also import the Molino Pisini flour and cans of tomatoes. We crush the tomatoes by hand,” de Haan says. “We’re proud of honoring the old traditions, and the response from customers has been amazing.”